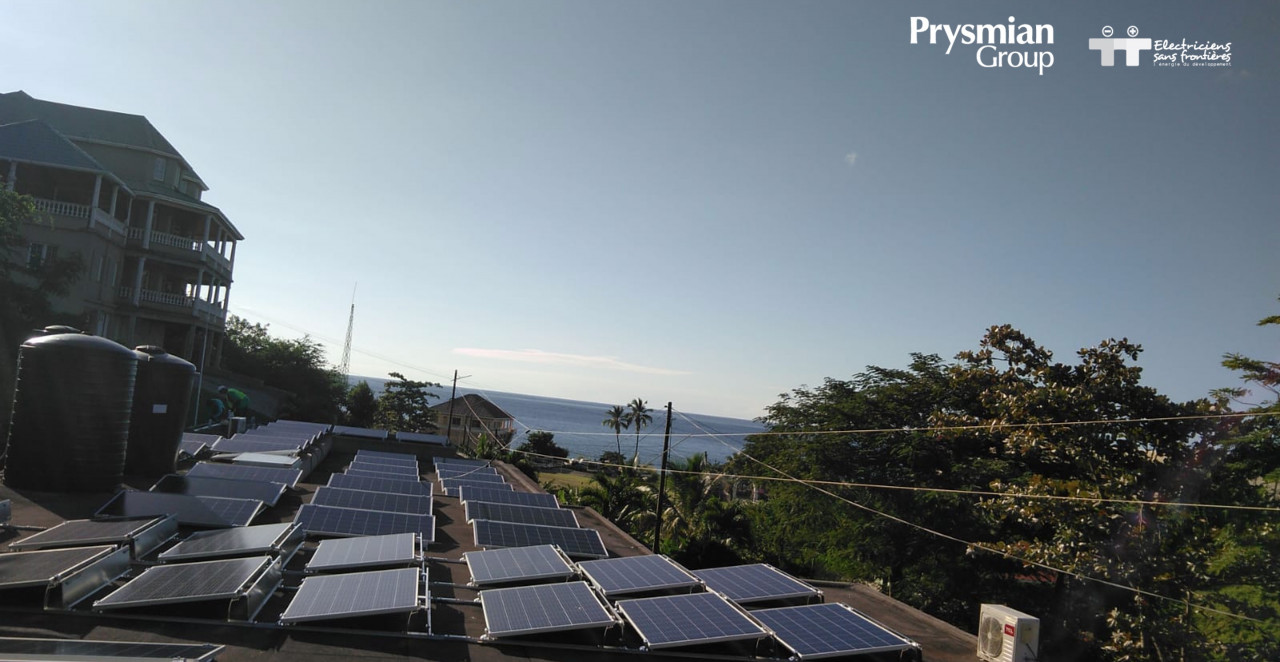 Coming out of the forced lockdown designed to contain the spread of Covid-19, the spirit of solidarity has proven to be an essential part of our daily life. For Electriciens sans frontières and Prysmian Group, solidarity is paramount in every one of their actions.

It is with this objective then that this “1 click = 1 metre” action, temporarily suspended due to Covid, will colour this partnership. In this way, the association’s missions will be developed through the sailing project that unites us.

Taking inspiration from the numerous projects aimed at collecting donations, all the members of the Prysmian project have decided to set up the “1 click = 1 metre” operation. Set to run throughout July, it will enable electric cable to be collected up with a view to supplying the public and community-based buildings across the island of Dominica with electricity after this Caribbean isle was ravaged by Hurricane Maria in 2017

In September 2017, Hurricane Maria ravaged the island of Dominica. Indeed, in addition to the significant human losses, 98% of buildings were damaged or destroyed, and virtually all the island’s electricity network went down: hospitals and health centres have been completely deprived of electricity and power and, as a result, they are incapable of providing care for those in poor health. As such, two years ago, spurred on by Dominica’s Ministry of Health and the Ministry of Energy, Électriciens sans frontières set to work on a major renovation and energy transition campaign, installing solar panels that can be dismantled, thus enabling the islanders to be self-sufficient in the event of a second hurricane, whilst also reducing the island’s greenhouse gas emissions.

The reconstruction of the electricity system within the health centres is being carried out by Électriciens sans frontières’ volunteers, who are providing a wealth of electrical equipment.
Guided by this humanitarian solidarity project, all the protagonists involved in the Prysmian Ocean Racing project have decided to come together to take action:

Throughout July and the Vendée Arctique Les Sables d’Olonne race, all the posts on Facebook and Instagram will enable metres of cable to be collected.
To achieve this, each time someone hits ‘Like’ on a message sent via the “Prysmian Ocean Racing” project’s social networks, Prysmian Group will undertake to give 1m of cable to the Électriciens sans frontières' volunteers, who are working on the renovation of Dominica’s health centres.

14.07Logbook from Kojiro ShiraishiSome news from DMG MORI Global One.14.07Beautiful day on Seaexplorer - Yach…It's warm ! Sunny day, light wind...13.07Dalin is first at the Gallimard Way…Charlie Dalin at the helm of the white a…11.07Issue onboard Seaexplorer - Yacht C…Latest update from Boris Herrmann.11.07Boris Herrmann gives us details abo…10.07Herrmann holding a narrow lead over…Approaching the end of the sixth day at …
All news and videos
News

And so they all wait with bated breath... This 14th July is set to host an incredible finale to the Vendée-Arctique-Les Sables d'Olonne

Some news from DMG MORI Global One.