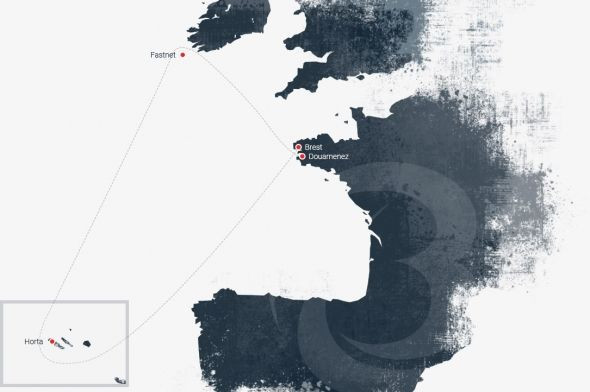 It is in a week from now on Wednesday 8th May that the Bermuda 1000 race will start from Douarnenez (Brittany). It is the first event in the 2019 IMOCA Globe Series and the only solo race of the season. Seventeen sailors representing six nationalities are expected to take part, including three women and seven solo sailing rookies. They will be facing 2000 miles of racing back to Brest, via the emblematic Fastnet lighthouse and the Azores. We take a look today at the line-up.

As in all of the events in the IMOCA class, the Bermuda 1000 Race will be bringing together a large and eclectic fleet with sailors competing on boats launched between 1998 (Alexia Barrier) and 2015 (Fabrice Amedeo and Giancarlo Pedote). While there are huge differences in terms of the technology, we shall also see skippers coming from a wide range of backgrounds with different experiences and various goals.

Seven solo rookies
Among the seventeen registered, seven will be taking part in their first solo IMOCA race. Sébastien Simon (Arkea Paprec) will be advancing once again on the former PRB. He has just spent 35 days aboard her and sailed twice across the Atlantic: firstly between Cadiz and San Salvador (Columbus Route) sailing double-handed with Vincent Riou, and then secondly, between Miami and Port-la-Forêt as if he was sailing alone. Also competing on a foiling IMOCA, the Italian, Giancarlo Pedote (Prysmian Group) has been sailing for two months on his new boat and will be taking advantage of this new 2000-mile race to boost his confidence and see how he measures up against his rivals.
Three other rookies will be setting sail aboard IMOCAs built for the 2008-2009 Vendée Globe: Miranda Merron (Campagne de France), Maxime Sorel (V and B-Sailing Together) and Clément Giraud (Envol). By competing in the Bermuda 1000 Race, they will learn a lot and will certainly enjoy the competitive aspect too, even if their prime goal is to finish the race and grab some precious miles to be selected for the 2020 Vendée Globe. Also discovering his boat, the Belgian skipper, Denis Van Weynbergh (Eyesea.be) will be taking part with the same aims aboard Nandor Fa’s former IMOCA. The countdown has begun too for British sailor, Pip Hare, who has been able to sail on her IMOCA (the legendary Superbigou), but is counting more on the wealth of experience she has acquired sailing solo on other types of boat over the years.
First time on a foiler for Yannick Bestaven and huge appendages for Sam Davies
Yannick Bestaven (Maître CoQ) has moved up a step by swapping his Farr designed boat from 2006 (now in the hands of Clément Giraud) for a much more recent IMOCA with foils, the former Safran. After a good trial period in Cascais (Portugal) with Roland Jourdain, Yannick will be racing for the first time with this boat, which should allow him to fully express himself. After a long refit, Sam Davies (Initiatives Cœur) relaunched her IMOCA last week and unveiled some new foils, which are impressive in terms of their size. The Bermuda 1000 Race will be a good first test, even if she has not had much time to get to grips with the new foils. We should add that last year, Sam came close to victory, finishing just twelve minutes behind Paul Meilhat.
Aiming to confirm their position after the Route du Rhum
Six competitors who completed the 2018 Route du Rhum will be attempting to continue along the same lines and clock up more miles again. Currently fourth in the IMOCA Globe Series, the German sailor, Boris Herrmann (Malizia Yacht Club de Monaco) intends to take advantage of the Bermuda 1000 Race to move up a few places, as the three competitors ahead of him are absent from this event. Both competing on boats designed by Finot-Conq, Damien Seguin (Groupe Apicil) and Stéphane Le Diraison (Time For Oceans) have the means to finish among the frontrunners in the boats with straight daggerboards, and maybe even leave a few foilers behind them... After his eleventh place in the Route du Rhum on what was his first major experience in the IMOCA class, Ari Huusela (Ariel 2) hopes to do equally well in the Bermuda 1000 Race and remain on schedule to become the first Finnish sailor to take part in the Vendée Globe in 2020. Respectively 14th and 15th in the Route du Rhum, Manuel Cousin (Groupe Setin) and Alexia Barrier (4myplanet) are aiming to continue their methodical progression and take advantage of this race to check out the work done during the winter.
Two skippers who completed the 2016-2017 Vendée Globe
We will also be seeing two sailors, who completed the last edition of the non-stop solo round the world race. Automatically selected for the next edition, they nevertheless wish to compete in all of the events in the Globe Series. The only sailor to have completed three Vendée Globe races in a row, along with Armel Le Cléac’h, Arnaud Boissières (La Mie Câline-Artipôle) wants to tackle the 2019 season to step up his performance aboard his IMOCA, which was equipped with foils last season. As for Fabrice Amedeo (Newrest-Art & Fenêtres), who relaunched his boat on Monday 29th April, he will be entering a key phase. “I shall be tackling the Bermuda 1000 Race remaining modest in terms of my ambitions, but it is important to take part. It’s a way to prepare and more importantly, the only solo race of the season,” he explained.
The 17 skippers registered for the Bermuda 1000 Race:
• Fabrice Amedeo (Newrest-Art & Fenêtres)
• Alexia Barrier (4myplanet)
• Yannick Bestaven (Maître CoQ)
• Arnaud Boissières (La Mie Câline-Artipôle)
• Manuel Cousin (Groupe Setin)
• Sam Davies (Initiatives Cœur)
• Clément Giraud (Envol)
• Pip Hare (Superbigou)
• Boris Herrmann (Malizia Yacht Club de Monaco)
• Ari Huusela (Ariel 2)
• Stéphane Le Diraison (Time For Oceans)
• Miranda Merron (Campagne de France)
• Giancarlo Pedote (Prysmian Group)
• Damien Seguin (Groupe Apicil)
• Sébastien Simon (Arkea-Paprec)
• Maxime Sorel (V and B-Sailing Together)
• Denis Van Weynbergh (Eyesea.be)
The programme for the Bermuda 1000 Race:
- Monday 6th May: Course to be announced
- Tuesday 7th May, 1730hrs (Douarnenez): Race briefing
- Wednesday 8th May, 1300hrs (Douarnenez): Start of the Bermuda 1000 Race
- Wednesday 15th May (Brest): First competitors expected to finish
- Saturday 18th May, 1800hrs (Brest): Prize-giving ceremony
More information about the Bermuda 1000 Race https://www.bermudes1000race.com/
Share
Facebook Twitter LinkedIn