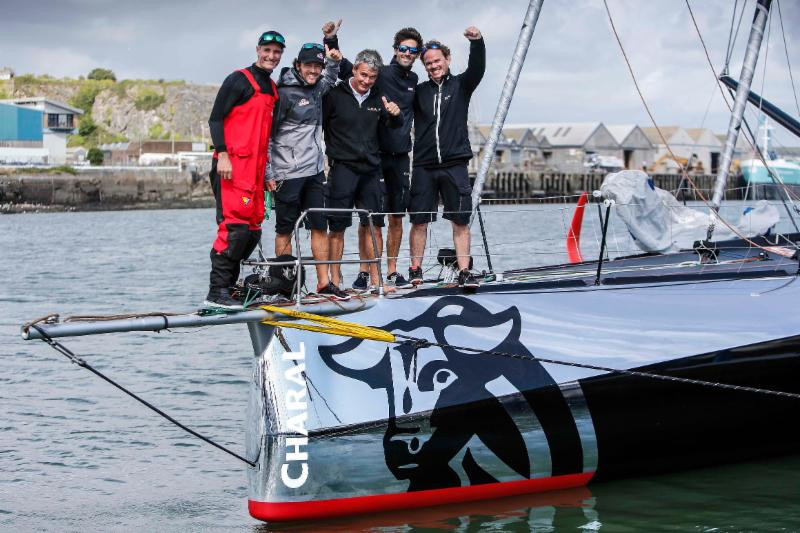 The 48th edition of the Rolex Fastnet Race gave us an extreme race with speed being the key element for the twenty IMOCA monohulls taking part, eleven of which were foilers.

It was a hard fought contest with boats close to each other and was led by Jérémie Beyou and Christopher Pratt on Charal, which was always a notch above the others and managed to keep the lead to the finish. With a time of two days, one hour, 32 minutes and 28 seconds, Charal got close to the IMOCA race record, but did not beat the reference time set by PRB in 2011 with a time of one day, 23 hours, 21 minutes and 27 seconds.

Just eight minutes behind the winner, Kevin Escoffier and Nicolas Lunven on PRB took a well-deserved second place after keeping up a fast pace. Just after them, Banque Populaire X (ex-SMA) sailed by Clarisse Crémer and Armel Le Cléac'h achieved a remarkable result making it to the podium aboard their boat with straight daggerboards.We look at some of the lessons learnt in this 48th edition and hear the first words from the winners.

Jérémie Beyou grabbed his first victory with Charal after being forced to retire from the last Route du Rhum, confirming the performance capability of the boat and his ability to sail her. “It’s great to win with Christopher and with Charal! It was a hard fought contest where you never had time to ease off. Rounding the Fastnet is always a great moment. The tack after the Needles when we managed to get the boat moving and take the lead ahead of everyone else was sheer pleasure.”

For Kevin Escoffier (PRB) whose Fastnet Race was a way to train for the Transat Jacques Vabre, and who was sailing merely for the eighth time on this boat, the race turned into an incredible duel with Banque Populaire, which his PRB finally overcame at the finishing line: “We had to push hard and give it our all. So that is what we did. We caught up on the leg back down from the Fastnet, keeping up the pressure on Banque Populaire that we finally managed to overtake when they messed up a gybe just before the finish...You can learn a lot in these races, as there are so many different conditions. We really enjoyed ourselves too, as it is not every day on a monohull that you sail reaching at more than thirty knots, which was fantastic...”

Clarisse Crémer (Banque Populaire X) also enjoyed her first race alongside Armel Le Cléac'h and was pleased with making it to the podium: “I find it hard to believe... We were focusing on our race and wanted to do our best without spending time looking at where we were in the rankings. I never imagined that we would make it to the podium.” For Armel Le Cléac’h (Banque Populaire): “It was a greatsurprise. At the start we had no idea how we would measure up against our rivals, particularly as we are still discovering the boat. However, we managed to do what was required to get to the podium.”

Six boats over the line in one hour

Six boats crossed the line in one hour and eight in ninety minutes. "The IMOCA fleet is getting closer and closer, and although the boats are very different, they offer similar levels of performance,”observed Guillaume Evrard, in charge of operations for the IMOCA, who followed the race out on the water: “The Rolex Fastnet is known to be an open race and once again it allowed everyone to show what they could do. The 2019 race gave us an exceptional plot with lots of ups and downs. We saw a real battle out on the water, with very little rest for the skippers, who had to work hard throughout and give it their all...We saw a remarkable performance by Banque Populaire (ex SMA) which in spite of her speed disadvantage on the way up to the Fastnet and back, was very quick in the transition phases and managed to keep up with the others, which explains how they got third place.In this year’s race, you needed to be fast and take the right decisions. Speeds were very high and we saw some great performances from people like Louis and Davy (Bureau Vallée 2), as well as Clarisse and Armel (Banque Populaire) who made it to the podium on a boat without foils... There is a big group now of boats that perform well likeMaitre CoQ and Bureau Vallée 2, which come from the same generation and did well. PRB and Initiatives Coeur, which are boats dating back to 2012, have shown us that with their new foils, they are at the same level as the boats from 2016. Prysmian Group had a very good start to the race, but failed to maintain the pace during the second half. Newrest Art & Fenêtres also showed that she was capable of reaching good speeds. And we should also mention Pip Hare, who for practically 24 hours was leading the race with her option around The Lizard...”

As for the incidents during the race, they began with Damien Seguin and Yohann Richomme on Groupe Apicil running aground shortly after the start. They were stuck on a sandbank for an hour before being able to get back in the race. As for the damage to the boats, the major story was Sébastien Simon and Vincent Riou being forced to retire on the new Arkéa-Paprec. After rounding the Fastnet Rock in sixth place and on their way back down towards Plymouth, they suffered from a short circuit and the boat was plunged into darkness, forcing them to retire from the race. We should add that Maxime Sorel also retired after encountering a problem with the mainsail car on his V & B Mayenne.