A race start equal to the difficulty of the Vendée Globe. 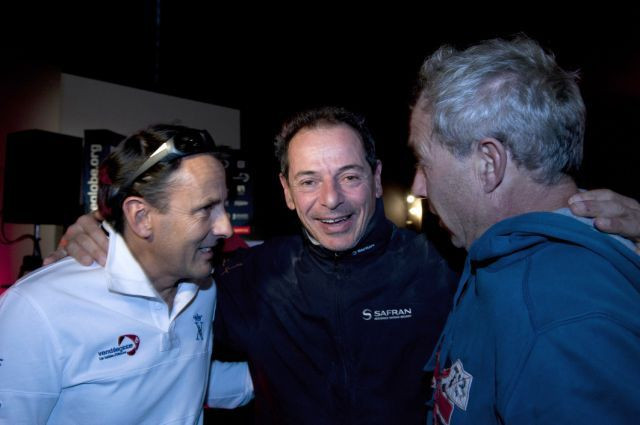 The Vendée Globe is the toughest race on IMOCA’s event schedule, as well as being the toughest race in the world! One skipper, one boat, one circumnavigation of the Globe without stopovers and without assistance.
Zero risk doesn’t exist but this sacred race doesn’t forgive anything at all!

It’s as much an adventure as a race; the race commands performance and the adventure has its share of surprises, not all of which are nice. It’s this combination that makes this extraordinary event so rich and difficult.

The four retirements share a massive sense of disappointment on the part of their skippers, their teams and their partners. After a few hours, a few days, whole months and years of preparation vanish into thin air in the space of a few seconds. Our four skippers will recall Mr Bruno Retailleau’s comment that the first victory in this 2012 edition is making the start line of this exceptional race. We are aware of how difficult this is to achieve. The skippers can be proud of this fact and are sure to be better equipped for the next edition.

What else do they have in common?
Misfortune on the part of Kito de Pavant aboard “Groupe Bel” and Louis Burton aboard “Bureau Vallée”. Both were victims of an accident, which cost them their race. On the road, despite improved road safety each year, accidents haven’t been eradicated and can cost lives; at sea the risk of hitting another boat exists too. Even though the sea is vast, it is increasingly busy and the means of detecting other vessels, which improve year in year out, are not without their faults. The AIS, radar and transponder are all navigation aids, which increase the safety of our boats, without making them infallible.
In Vendée Globe’s history, solely two retirements have been due to collisions; two more have been added to this list today. As always, experience makes you more intelligent; we’ll be studying each case so as to share our findings with all the teams and further improve the safety of our boats.

The other two “perils of the sea” rightly described as ill fortune by Dominique Wavre, relate to Marc Guillemot aboard “Safran” and Samantha Davies aboard “Savéol”.
These two accidents involve the most sensitive parts of our boats, the mast and the keel. They are both linked to performance and benefit from the special attention devoted to them by all the teams. Nobody’s playing God and everyone knows that in order to win, most importantly you have to finish.
At the same time four years ago, we’d suffered three dismastings. In the last Volvo Ocean Race four out of six boats dismasted. Each category of boat is seeking to improve the reliability of the masts by setting rules, which are geared towards this aim, and IMOCA is no exception. Whatever happens, the mast will remain a vulnerable element, be subject to the worst stresses and require constant attention. Within IMOCA the masts are limited in size, the fibres are qualified and the tubes undergo annual structural checks.
At the point where Samantha’s boat dismasted, she was in the thick of the storm, in raging, messy seas, and the elements broke this Achilles’ heel, which must perform well and be absolutely indispensable.
Today we have no explanation about the loss of Safran’s keel. We all appreciated Marc’s candour and transparency during his press conference the day after his boat was damaged. It was a difficult exercise and Marc perfectly embodied the honesty and merit of our skippers. Though the keel is a major element in performance, it’s also a vital safety element and any serious incident must be explained and shared with all the IMOCA skippers. Our rules impose resistance criteria and the control of frequencies, but each skipper remains free to design a keel as s/he intends it to be. The method of calculation is placed in a sealed envelope, which shall only be opened in the event of damage. This is the case for Safran and the resulting analysis will be shared with all the IMOCA architects and designers.
IMOCA doesn’t doubt for a second that the recognised competence of Team Safran will enable us to move forward in the right direction. Though the competition remains merciless, our skippers are responsible people both with regard themselves and others.

All these merits give our Class its great strength and give the Vendée Globe its beauty. The thousands of people following the race, whether they are enthusiasts of sailing, sports or human adventures, don’t lie; we thank them all.

The Race and the Adventure continue.