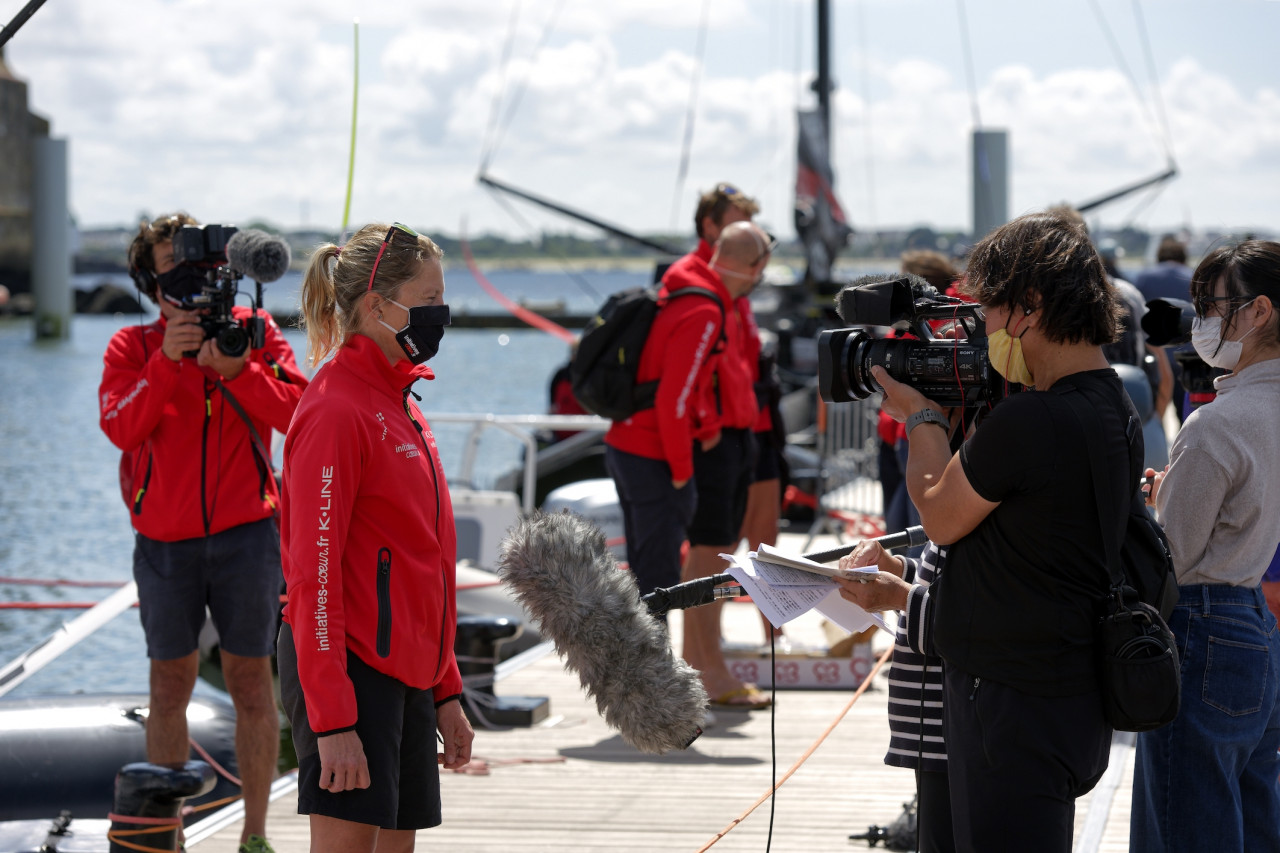 The eve of the start of the Vendée-Arctique-Les Sables d’Olonne has been a rather strange day, punctuated by the health protocol imposed by the organisation and a delivery trip to Les Sables d’Olonne for all the boats in the fleet. An odd situation all in all, but sport is back in the frame!

This Friday 3 July will be remembered as a day unlike any other, during what is an unprecedented period. On the eve of the battle, it feels like a win for freedom thanks to sheer willpower. It has been marked by the cohesion of a Class IMOCA carried along by the urgent need to present a fleet in perfect working order on 8 November 2020, in the channel linking Les Sables d’Olonne with the sea, for the start of the Vendée Globe.

In 24 hours’ time, the fleet will take the start of the Vendée-Arctique-Les Sables d’Olonne yet, on this Friday 3 July, the solo skippers have left the dock of their port of registry in crewed configuration. In Port-la-Forêt, La Trinité-sur-Mer, Lorient, Les Sables d’Olonne and La Rochelle, the same well-oiled ritual took place in accordance with the strict protocol. Indeed, before stepping aboard the boat with two, three or four sailors including the skipper, everyone took a PCR swab test, which in under 24 hours will tell the patient whether or not he or she is a carrier of the Covid-19 virus.

There was a real buzz in Lorient since half the Vendée-Arctique-Les Sables d’Olonne fleet is based there or stopped off there. A shed at the dock housed a temporary medical space (one table, two chairs). Two biologists, one nurse and the official race doctor, Dr Thierry Charland, hosted the skippers and their teams, all of whom had already been tested at the start of the week. “We made this pre-start test compulsory for the skippers and crews who will be making the delivery trip to ensure that everyone has a negative result, explains Thierry Charland (Association Médicale Course au Large). It’s also vital in the event of damage to ensure the preservation of the emergency channels with sailors who are not contaminated.”

No problem, assures Giancarlo Pedote, skipper of Prysmian Group: “It’s important for ourselves and for others that we take these tests. Our sport suffers all kinds of incidents and, should we have to disembark in a port other than our port of registry, we need to be able to say that we are healthy”. The Italian sailor and his fellow skippers will get the results at around noon on Saturday, namely three and a half hours before the start of the race. Everyone hopes that this device will not become a ritual, but it proved to be such a convincing way of ensuring everyone’s safety that French offshore racing has been the first to gain the right to get back down to competition.

Antoine Mermod, President of the Class IMOCA: “The story of this unusual start dates back to 19 March when we had the red carpet leading to the Vendée Globe pulled out from under us. At that point, we had to tread a rather different path and get everything and everyone back on their feet. We witnessed the initial programme crumbling around us, so we rethought things and got things going again. Getting back down to competition was difficult, because we had to secure a great many authorisations, but the level of trust that unites the members of the Class IMOCA enabled us to remove all the barriers surrounding our sport at the moment by getting everyone to agree to these restrictive and necessary health protocols”.

A race with no village

For some sailors, this race with no village means that they have somehow lost their bearings in the carfully drawn up mental protocols. Indeed, for Maxime Sorel (VandB – Mayenne), “it lacks the boost you get from sharing with the public, but I know that I’m going to set sail well rested.”

Nothing surprises Giancarlo Pedote (Prysmian Group): “Our job is a story of constant adaptation, to the weather and to race situations. It’s not too much of a nuisance to have missed out on the usual ‘village’ period to project our minds forward into the race.”

Meantime, Samantha Davies (Initiatives-Cœur), intends to make the most of the hours she has ahead of her, on her boat, awaiting the start procedures: “There will be four of us aboard, including Paul Meilhat, who’s supporting me with the project. I’m happy to have 24 hours to fully concentrate on the race, as my role over the past week has centred on being a mum at home, alone with my son. As such, I’m going to be able to give everything a thorough check, get some rest and get myself in skipper mode”.

Thomas Ruyant (LinkedOut) also has a programme to keep him busy for the next 24 hours: “I’m going to do an in-depth study of the weather and make the most of the time to get some proper rest and eat well. We’re going to test two or three small things on the water and fine-tune the last little details. I feel a mix of excitement and anxiety, so pretty much the same as every start”. Jérémie Beyou (Charal) is never short of good ideas: “The Pôle Finistère Course au large training cluster is preparing a weather briefing for us tomorrow morning. We’re going to moor the boat beside the island of Belle-Île, in a spot where there’s a signal, so we can benefit from the latest analysis from Jean-Yves Bernot (weather guru)”.

In La Trinité-sur-Mer, L’Occitane en Provence was relaunched and is ready to race. Not even two weeks ago, Armel Tripon’s IMOCA hit an unidentified floating object resulting in a massive hole in the bow and a gigantic repair operation to get the skipper from Nantes back out on the water.

In Les Sables, Race Management has also been working in a rather unique atmosphere, “it’s as if the lack of routine has quashed the usual emulation, says Gwen Chapalain, head of the organisation.It’s quite a special intellectual construction”. Local skippers, Arnaud Boissières (La Mie Câline – Artisans Artipôle) and Manuel Cousin (Groupe SÉTIN) had to head out of the channel from Les Sables d’Olonne early this afternoon and wait around offshore in the hope of crossing paths with Yannick Bestaven (Maître-CoQ), who was coming up from La Rochelle. “It certainly is a strange atmosphere, smiles Arnaud Boissières. There aren’t many people about, it’s strangely quiet. We’re certainly getting into race mode later than usual”.

Competition comes in all forms though: the sports event that comes with a thousand challenges; the race that will rally together 130 volunteers eager to ensure the start runs smoothly, both at sea and on land; 20 skippers and their shore teams, logistics and communications teams, all working hard to go into battle alone along a 3,556-mile race that will take them to the south of Iceland before dropping down to the Azores on what promises to be a complex and breathtaking race. Kojiro Shiraishi (DMG Mori), the flamboyant fifty-something, has a very good grasp of the performance: “I hope it will be an important step forward for our sport. It is a real message of hope that the Vendée-Arctique-Les Sables d’Olonne is able to take place”. As was nicely described by another organiser of sports events: “There will be fewer people, yes, but there will be just as many smiles”.