A thriller of a finish! 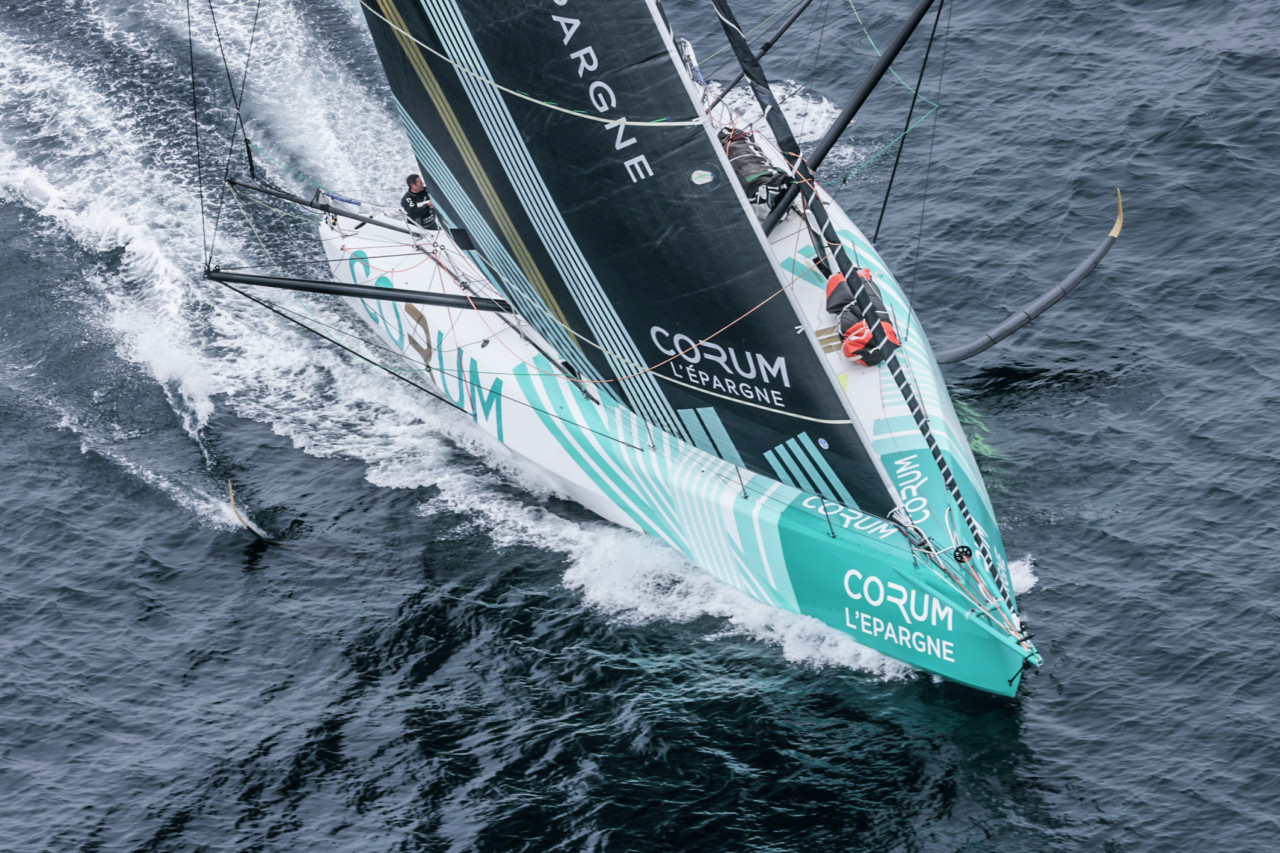 Close racing in the IMOCA Class is nothing new, especially after the last Vendée Globe, but even so the first leg of The Ocean Race Europe produced a thriller of a finish that had fans gripped to their computer screens all over the world.

The glory in this opening stage of the inaugural edition, that featured fully-crewed competition in the IMOCA Class for the first time in many years, went to the veteran French skipper Nicolas Troussel and his team on CORUM L’Épargne who made a late charge in the final stages.

The win was a nice pay-back for Troussel who had to contend with a dismasting in the early stages of the Vendée Globe before he was able to show what his new Juan Kouyoumdjian-designed boat was capable of.

Assisted by The Ocean Race and Vendée Globe veteran Séb Josse, plus French sailors Marie Riou and Ben Schwartz, Troussel said he never gave up even when they were in last place with just 20 miles to go, in a race dominated by a slow-moving weather front that concertinaed the fleet in the closing stages.

“We knew it was possible to catch the leader and we did it,” a delighted Troussel said on the dockside in Cascais. “It was an intense race, but there was a lot of speed differences between the boats depending on the points of sail and we knew that everything could be decided here as well as in Alicante, on the next stage, or in Genoa at the finish. But we are very happy with this victory – we fought until the end and the final stretch was really magical for us. It came down to the last wind…”

Troussel crept across the line just under a minute-and-a-half ahead of Charlie Enright and his crew on 11th Hour Racing Team. They were less than two minutes ahead of Thomas Ruyant and the team on LinkedOut who managed to put their bow through the line just five seconds ahead of the only non-foiler in the class, Offshore Team Germany skippered by Robert Stanjek.

The backmarker at the end of a 1,302-mile leg from Lorient was Louis Burton on the newly-acquired Bureau Vallée 3 who finished 20 minutes after Troussel. The competition had been intense and at the finish the five IMOCAs and seven VO65s, who were racing in a separate category, were all heading for the line at once.

In the end CORUM L’Épargne not only clinched the IMOCA Class win but took line honours, followed by the first three VO65s and then 11th Hour Racing Team in fifth place on the water. If this leg showed us anything about the comparative performance characteristics of the IMOCA class as against the VO65s, it is that in very light winds the old Volvo Ocean Race boats have the advantage with their extra waterline length and because they do not carry drag-inducing foils. In the breeze however, they are no match for the foiling Vendée Globe class.

The stage started with light winds off Lorient and then saw the crews head south towards Cape Finisterre in a building northerly airstream that dominated affairs for the next four days. The sailors enjoyed a fast run out to a turning mark set about 480 miles west of Finisterre where 11th Hour Racing Team and LinkedOut were ahead and match racing each other.

From there to the finish everyone was playing the same game as the navigators and skippers tried to stay in the breeze in a weather system moving slowly west-east. Matters were made more complex by the presence of the Traffic Separation Scheme (TSS) off Cascais and the dwindling wind strength as the boats neared the line.

Ruyant was disappointed to finish third but enjoyed the challenge of racing fully-crewed on his blue and white Vendée Globe boat. “It was a great first leg of the The Ocean Race Europe – we had a lot of fun,” he summarised. “I’m still learning about my boat and that’s great, especially in view of the rest of the season. It was a great leg with lots of different conditions and a lots of twists and turns at the end of course, as we like in the IMOCA Class! I’m a little disappointed with the finish – we would have liked to finish better but that’s the way it is.”

He said the weather situation in the closing stages made for hard work on board for his crew that includes Morgan Lagravière and Clarisse Crémer. “We moved forward with a front that was difficult to pass,” he said. “We were the first to hit this front and the fleet came back together from behind. Then we had a new start with a bit of uncertainty at the end – a suspenseful finish. It’s a real treat to race with a crew in contact with other boats – it’s a great format,” added Ruyant. “We manoeuvred quickly and also we sailed faster with good averages.”

Enright, meanwhile, was delighted with his team’s first competitive outing as it continues its build-up to the Ocean Race around the world next year. The race saw the American boat foiling at over 30 knots on flat water during some parts of the reach to Cascais. There was also a tricky moment earlier in the contest when the crew realised they had picked up some debris on their keel that required a backdown to get it off. Then in the closing stages they had a small collision with one of the VO65s, Ambersail-2, on the edge of the TSS area as a result of which Enright decided to take a penalty.

“It was an intense and difficult leg, the first leg of The Ocean Race Europe,” said Enright. “It saw a lot of lead changes, a lot of close racing and a variety of different conditions. We saw the strengths and weaknesses of every boat – that’s for sure. You know, everybody was fast at times and everybody was slow at times.

“But yeah, it was just amazing how close the racing was, how tense it was – there was not a lot of sleep – having constant position reports was a feature definitely, which I’d say elevates the stress levels. At the end the whole thing could only move at the pace of the (weather) front, so the only way to get ahead was to get behind, which is a tough thing to do at times. But generally I’d say we’re pretty happy with our speed and performance.”

After some well-earned rest, the five IMOCA boats are due to compete in a coastal race off Cascais on Saturday – with points for the top-three finishers –before the start of leg two to Alicante in Spain on Sunday.