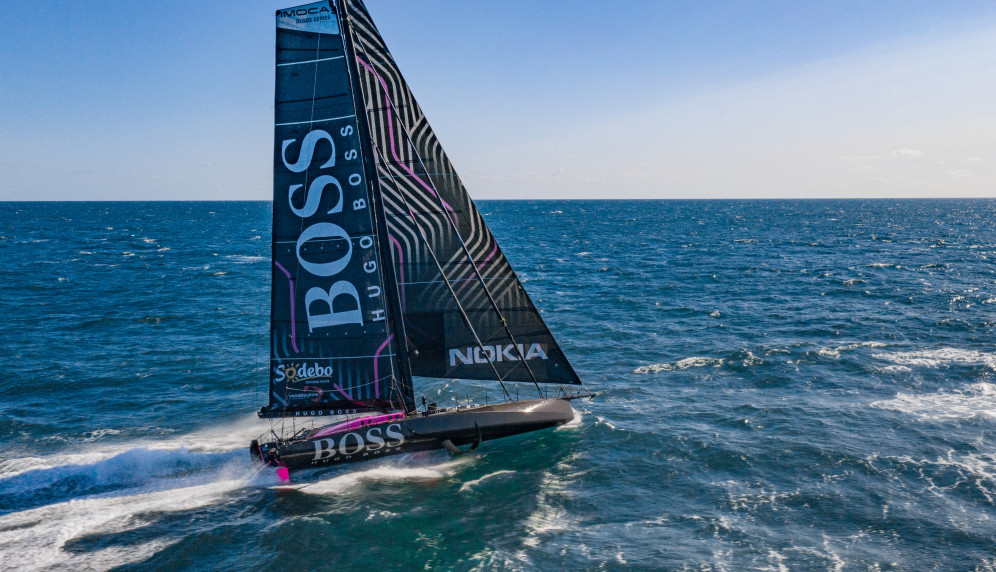 The leader of the 32 boat fleet Alex Thomson on HUGO BOSS crossed the Equator at 1319hrs UTC this Wednesday.

The complicated weather patterns of the first week, not least the high proportion of upwind sailing and multiple frontal systems put paid to any hopes of the Vendée Globe’s 9 days 7 hours and 02 minutes passage record between Les Sables d’Olonne and the Equator being broken.

Nevertheless it was the record holder himself Alex Thomson (HUGO BOSS) who crossed the equator into the South Atlantic at 1319hrs UTC leading the fleet this Wednesday afternoon with around 79 miles in hand over second placed Thomas Ruyant (LinkedOut).

As he passed through the 350 nautical miles convergence zone Thomson experienced shifts and changes in wind pressure and had a notable slow down last night but this morning he was well into the SE’ly tradewinds the bow of his black boat pointing towards Recife, the most easterly corner of Brazil, and today has been making 18 knots of boatspeed with the wind forward of the beam, likely under full main and J2 headsail.

The weather charts offer some promise for the race leader. The Saint Helena high pressure system which dominates the weather systems in the South Atlantic, is displaced to the east slightly with a low pressure to its west thus creating a corridor of SE’ly airstream which -as things stand – would allow the leaders to chart a more direct, fast course to the south east.

The scenario is not dissimilar to the last edition when only three boats were able to cut the corner like this, Thomson leading Armel Le Cléac’h at the time.

Regardless of the medium term prospects the South Atlantic trades usually benefit the leader who is blessed by progressing into the stronger winds first at reaching angles which open and allow the skipper to ease sheets.

“I think that in general all the new boats will be about the same in terms of speed at these tight reaching angles but the gain to the leader is usually from getting south into the better breeze first being able to go progressively faster. Alex has been quiet today, I am sure getting as much rest as he can after the Doldrums which were quite kind to him. He had a bit of a slow down in the night but all is good with him.” Ross Daniel, Technical Director at the Alex Thomson Racing Team commented this afternoon.

The seemingly omnipresent Jean Le Cam (Yes We Cam!) – who, since 2004 until last edition held the record to the Equator was third this morning but dropped to fourth today now 17 miles behind third placed Charlie Dalin (APIVIA).

Le Cam will have been saddened by the retirement of Nicolas Troussel from the race course. They are Finisterian friends who raced the Transat Jacques Vabre together last year while Troussel waited for his new Juan K designed IMOCA CORUM L’Épargne to be finished. Racing Le Cam’s boat in the colours of CORUM, the budget from the French asset and savings management brand paid for new sails for Le Cam’s 2007 Farr design.

Troussel is not expected to reach the Cape Verde islands before Friday. His loss to the race is significant, not least as much was expected from him and his new boat, but at 44 years old this was finally his chance to match the exploits of the close sailing buddies of his youth, Armel Le Cléac’h and Jérémie Beyou. Twenty years ago this talented trio trained and sailed together on Morlaix Bay under the guidance of Hugues Imbert, director of the Carantec club and Bruno Jourdren. Beyou, Le Cléac’h, Troussel, three teenagers who went on to win six from ten La Solitaire du Figaros, two each. Way back, before the 2016 race, Beyou said “It would be fantastic if Nico made it too in 2016, so we would all back together again.” This Vendée Globe should have been Troussel’s time but lady Vendée luck has this time kicked him, and his teenage friend Beyou in the teeth. It will certainly take the Breton sailor some time to get over his disappointment.

The Doldrums have been kind so far. People may remember Charal being stuck here for three days in the 2019 Transat Jacques Vabre, which led to the boat missing out on victory in Brazil. With the Doldrums, you never know what is going to happen and a change may just be a cloud away. The meteorologist, Jean-Yves Bernot, explains the situation very well. “Forecasting where a squall will develop in the Doldrums is a bit like guessing where the first spurt of steam will come out of a saucepan.”The group behind the British HUGO BOSS sailor is speeding into the lion’s den hoping that they will not be swallowed up.

“I’m a few miles from the Doldrums. Things were moving along quickly during the night and I get the feeling the Doldrums won’t be slowing me down that much either. It looks like a simple convergence cloud between the SE’ly and NE’ly trade winds. Looking at it optimistically, I think I may get out of here in a few hours,” said a hopeful Sébastien Simon aboard his foiler, ARKÉA PAPREC, averaging twenty knots this lunchtime.

All in the trade winds

To the SW of the Canaries finally there are smiles as sails have stopped slatting and are full again and the appendages singing nicely. They have finally found some wind. After three days of being stuck in the ridge of high pressure, Armel Tripon, Ari Huusela, Alexia Barrier, Miranda Merron, Clément Giraud and Sébastien Destremau have seen their speedos indicating double-digit speeds. They are finally sailing along in the trade winds taking them downwind in a NE’ly breeze, which although unstable, is enabling them to step up the speed. That has been the case since yesterday for Stéphane Le Diraison, Pip Hare, Arnaud Boissières and Manu Cousin who are on their way towards the Cape Verde Islands.

For Fabrice Amedeo (31st 1760 miles from the race leader) and for Jérémie Beyou (32nd 2830 miles behind the frontrunners), the Vendée Globe is now a completely different event. This is no longer a competition, but rather an opportunity to write and tell a very different story. Fabrice Amedeo: “The Vendée Globe teaches you a lot in life. I am going to have to learn how to be patient and understand that dreams don’t always work out as you would like. I have had to change my goal, but it is still magical to be able to sail around the world on a boat like this.”Jérémie Beyou said during the 5 a.m. link-up, “he wanted to take a look at himself, and sail the way he wanted.”Japanese skipper, Kojiro Shiraishi, has been working hard trying to repair his mainsail. For several days, he has been sailing just with a headsail, with the deck of his boat transformed into a sewing, gluing and sawing workshop. “I don’t feel that upbeat. But I keep telling myself that if I manage to complete this round the world race, it will be an amazing achievement.”