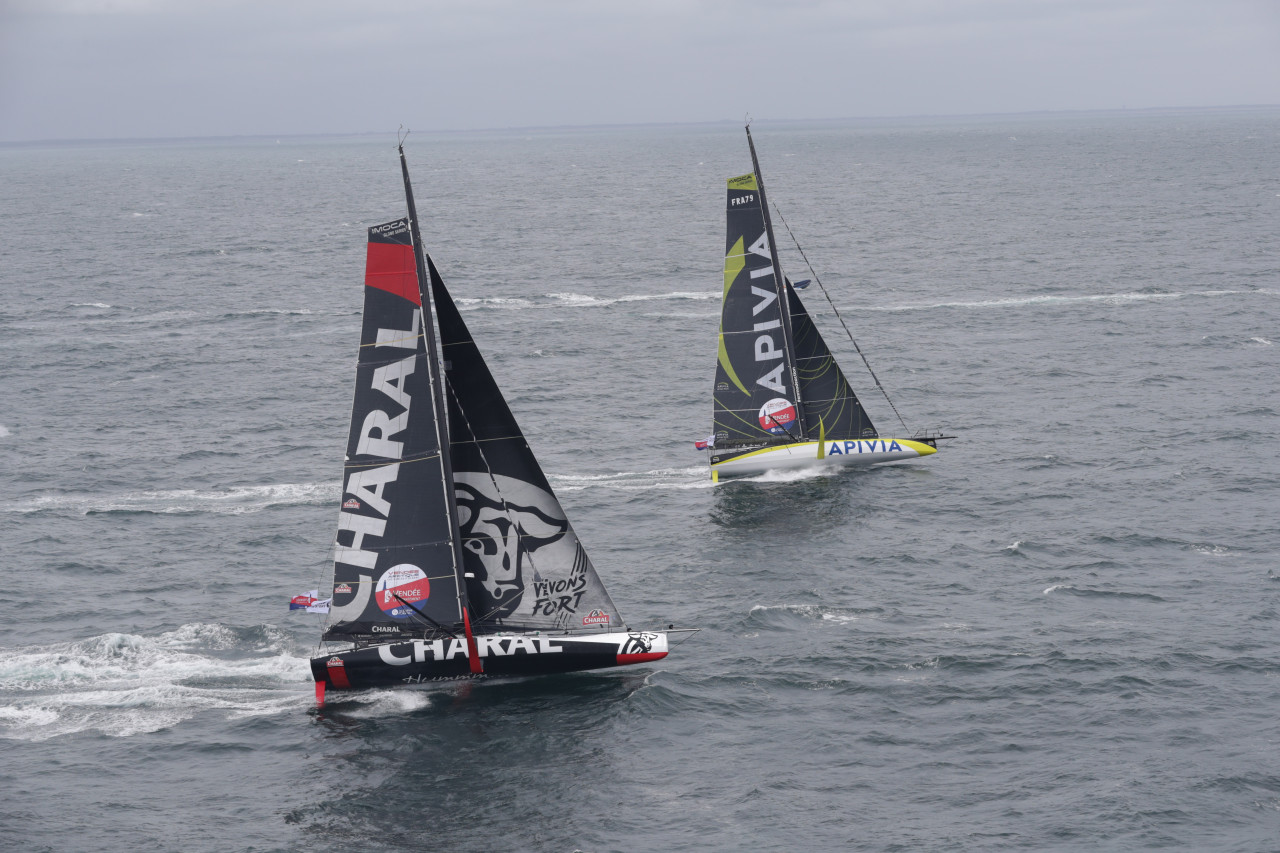 A good dose of light winds, a long lift, a change of leader and another epic battle within the match for 4th place… This fifth day of the Vendée – Arctique – Les Sables d’Olonne has reshuffled the cards once again. As per usual… or almost.

Charlie Dalin (Apivia) and Jérémie Beyou (Charal) are continuing their ascent of the north face, foil against foil. After 98 hours of traversing the weather systems, 0.6 miles separates them tonight. They are now just 230 miles from the ICO-UNESCO waypoint positioned to the south-west of Iceland at 62°N 25°W. This morning, the skipper of Charal had the upper hand by just a handful of miles. Then the duo had to negotiate a ridge of high pressure, which saw Jérémie Beyou fall into a patch of calm airs, giving Charlie Dalin the opportunity to sidestep him and make good his escape.

“To win races, said Jérémie Beyou at this Wednesday’s telephone link-up, you have to be good… and have a bit of luck on your side. I just missed out on the latter… It’s annoying. I was the first to tack, at the front of the pack, and I’m the one who’s done most of the legwork. There’s some logic in it though: when you’re leading, the others see your situation in slow-mo. They’re no idiots, they go round the outside”.

Thomas Ruyant (LinkedOut), the leader until Tuesday morning, before being penalised by his slightly extreme northerly option in the strong winds, has managed to slink back up into third position some 42 miles astern of the leaders at the 18:00 ranking.

18 miles behind him, a four-way battle for fourth place is really where the action is. The 18:00 ranking painted a very different picture from this morning’s play: Kevin Escoffier (PRB) is 4th, further west than the Briton, Samantha Davies (Initiatives-Coeur) who is lying in 5th position. German skipper Boris Herrmann (Seaexplorer – Yacht Club de Monaco) is 6th and Isabelle Joschke (MACSF) 7th. What’s more, there is precious little separating them!

TRAFFIC JAM AT THE MARK?

The leaders, who were trotting along gently this morning, have gradually been lifted over the course of the afternoon, providing the perfect opportunity to give the foils on port tack a bit of exercise. Having had their speed curbed a little in the same ridge of high pressure, the chasing pack should also find a bit more air and with it the benefit of a more direct course. Calm conditions are the order of the day for everyone at the ICO-UNESCO waypoint, resulting in the top 14 boats squeezing back together on the leader board. The situation should also benefit the back runners, whose passage around the northern waypoint should – thanks to the magic of weather – be completed less than 24 hours after the leaders.

Whilst the fleet is busy up north, Race Management for the Vendée – Arctique – Les Sables d’Olonne has repositioned the Gallimard mark, the second waypoint, which was initially set to the north of the Azores. Alas, a zone of high pressure is currently making itself at home over the archipelago and, to prevent the back runners becoming ensnared in the light airs, Jacques Caraës has opted to shorten the course and reposition the Gallimard mark very slightly below the latitude of Les Sables d’Olonne, around 400 miles from the coast of the Vendée department (read below).

For nearly four days now, the IMOCA fleet has been working hard and dealing with a great many different situations and points of sail in a short space of time. In the process, it has spared no expense in terms of human effort or material constraint. The first finishers are due across the line overnight on Tuesday 14 July through into the morning of Wednesday 15 July. These 10 to 12 days at sea are just what was originally scheduled for the winner, so the programme remains virtually the same!

Ranking on Wednesday 8 July (18:00 French time)
17 skippers on the racetrack

QUOTES FROM THE BOATS

Jacques Caraës, Race Director for the Vendée -Arctique -Les Sables d’Olonne
“By repositioning the Gallimard mark, Race Management and the weather cell are simply trying to refine the ETAs (estimated time of arrival). A high pressure system is settling in over the Azores, which the back runners might well have become ensnared in if the initial positioning had been retained. Positioning the mark at 46°20N – 015°W enables us to pretty much stick to the initial format of around 12 days. It is likely there will be a bunching up of the fleet with around thirty hours separating the first and last boats. The skippers in the Class IMOCA have really had their work cut out in the first part of the race. When you sail a course from north to south, you know that you’re going to pass through various weather systems rather than accompanying them: low pressure systems, ridges of high pressure, sustained or light winds, all of which enable you to play around with strategies and work on points of sail. This is evidenced by the fact that the IMOCAs with classic (straight) daggerboards are still in the match and it’s very difficult to predict who will make the podium!”

Jérémie Beyou (Charal)
“There’s still all to play for, but Charlie is in front nonetheless. I’m not really looking too much at what’s going on around me though. I’m focusing on trying to get my bearings and get a feel for being aboard, but I’m still looking at the ranking. I’d managed to make a bit of a clean break, but I don’t have that anymore. It’s a bit disappointing. I’m going to continue doing as I see fit”.

Fabrice Amedeo (Newrest - Art & Fenêtres)
“We have flat seas and it’s very pleasant. It’s very cold though. It’s hard to imagine that it’s summertime in France. Here, the ambiance is two fleece layers and a hat. The oceanographic sensor is working well. It’s not always easy to change the microplastic filters when there’s a lot of breeze and heavy seas, but I’m trying to find the right moment each day according to the weather”.

Samantha Davies (Initiatives-Cœur)
“10 degrees this morning under my cuddy. I’ve got out the clothes I haven’t worn since the Southern Ocean during my previous round the worlds! I haven’t yet resorted to “THE Arctic socks”, as I only have one pair and I really want to make the most of them once I’ve passed 60 degrees North! It was a calmer night in terms of the conditions and motion of the boat, but the shifty wind called for me to work on my trimming and sail choices, so it was impossible to get in any long naps. Fortunately, I have managed to link together a series of siestas (in my bunk, which was moving around a lot less than on previous nights) between the trimming”.