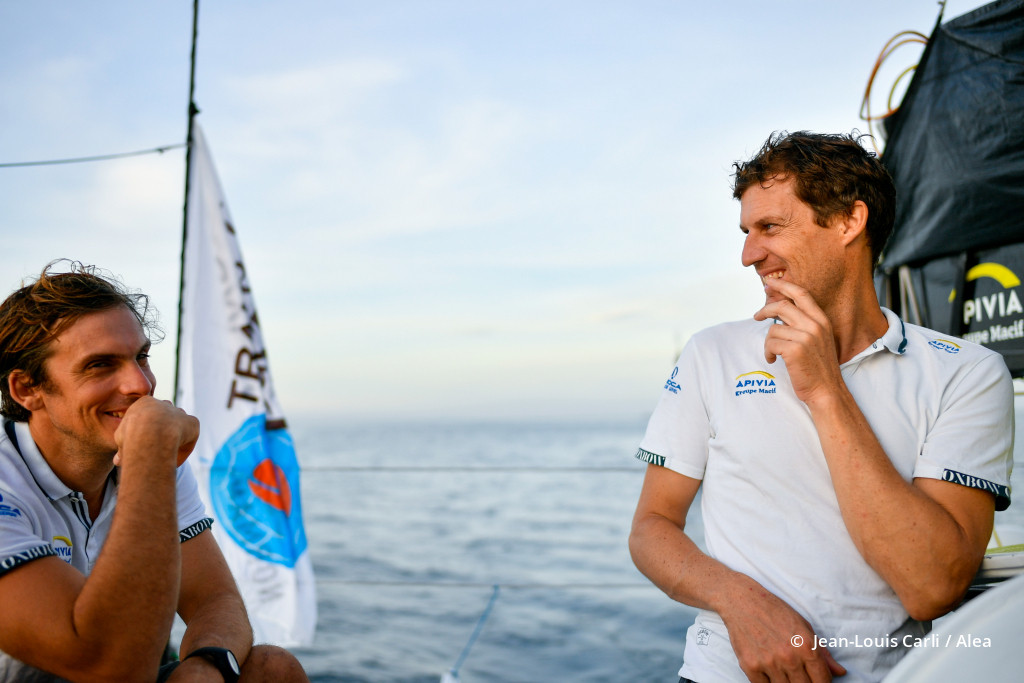 Ending the year on a high with a determining performance from Charlie Dalin and Paul Meilhat. Finesse and feeling played out heavily in their race, allowing the APIVIA pair to cloture a celebratory second place in Martinique.

The skippers’ eyes twinkled as they were warmly welcomed to Fort-de-France. Here are a few chosen extracts from the press conference this morning.

Charlie, did you really say that you weren't setting out to be second?

Charlie Dalin (CD):"It's true that the objective was to go for the double, but we know how transatlantic races work and we set off with a lot of modesty.

To win a race, you need all the ingredients to be leading: a reliable and fast boat, an inspired strategy, good weather...

Fortunately, ocean racing does not have a recipe that works every time! The boats have different performances and aerodynamics depending on the conditions.

We are happy to finish in this position, after a close fight with LinkedOut and Charal. The race was intense."

Which of the two boats did you fear the most?

CD:  "LinkedOut is a boat quite similar to APIVIA, with differences in hull and structure but both boats are Verdier designs.

The sail configurations are different, and it is a fast boat.

With APIVIA, we discovered performances that we didn't know about downwind VMG, a point of sail where we were usually faster than her. In reaching, we are faster than LinkedOut, there was very little reaching compared to "normal" Jacques Vabre conditions. LinkedOut's foils are more suited to these points of sail. They have found the keys to go very fast in these conditions. All their moves went through, they sailed very well."

Paul Meilhat (PM):  "With Charal it was the opposite, when we were in contact, we had that little bit more speed. It's a boat that's typed for downwind sailing.

CD:  "Charal is a good boat and an accomplished boat. I was surprised that it was not mentioned in the podium predictions before the start.

You took the lead very quickly. You were in the lead at every major stage of the race, but there was always competition coming from behind. How did you feel about that?

CD:  "We would have liked to keep this place! It was a bit frustrating.

After the gybe to Madeira, we managed to catch a front, and then everyone got caught up with different wind strengths and directions. We got caught up.

After that, the three boats got together to the south of the Canaries and then it was up to the front along the forbidden zone

You always want to be up front in conditions that allow you to make the break, but it doesn't always work!"

We've talked about great weather conditions, but light airs are part of the race too! Don't we tend to forget that?

CD:  "It's part of racing but it's rare! I've always wanted multi-purpose boats. But these were exceptional conditions. We reefed at the start, then reefed at Cape Finisterre for four hours. And then the mainsail spent its life up, just until the finish!

Between the Canary Islands and Cape Verde, we have seen three different strategies. How did you make your strategic decision?"

The southerly wind that arrived was quite unprecedented. The forecasts were different from what the files showed, and it seemed dangerous to go so far east.

We managed to make up for it at Cape Verde with a good idea from Paul to go and exploit a zone of wind acceleration that didn't appear on the files.

We have a few transatlantic races under our belt with Paul, but this was the first time we left the Canaries! As Nicolas Lunven used to say, "We're crossing the Atlantic via the tourist route!"

What do you think of this double passage of the Doldrums?

PM:  "At the beginning we thought it was good ... The passage through the forbidden zone to go along Brazil was quite long, with a lot of gybes. It was a bit of a shame.

PM:  "The combination of this zone and the fact that we were sailing for more than a week in this intertropical zone was hard. We didn't necessarily realise that with this race close to the Equator, we would be staying in a very hot, unstable zone with squalls.

It's interesting but the start of the race was difficult…"

What is your overall impression of the year 2021?

CD:"It was a pretty good year! The project was launched in 2019 and started with a victory in the Transat Jacques Vabre.

We didn't go lower than second on the podium and didn't experience any retirements.

I have a great team around me and I have been very well accompanied by Paul with whom we have sailed a lot."

Tell us about each other!

PM:  "We've been working together for over six months. What I've learned from Charlie is that his will to win all the time turns into a self-sacrifice to leave nothing to chance. He is very thorough. Even when everything is going well, he goes looking for something to go faster! It's very tiring to sail with Charlie, but we don't sail a transatlantic to take a rest (laughs).

CD:  "With Paul, it's always very positive and it's always fine, he's never unsettled when we miss an option, unlike me."