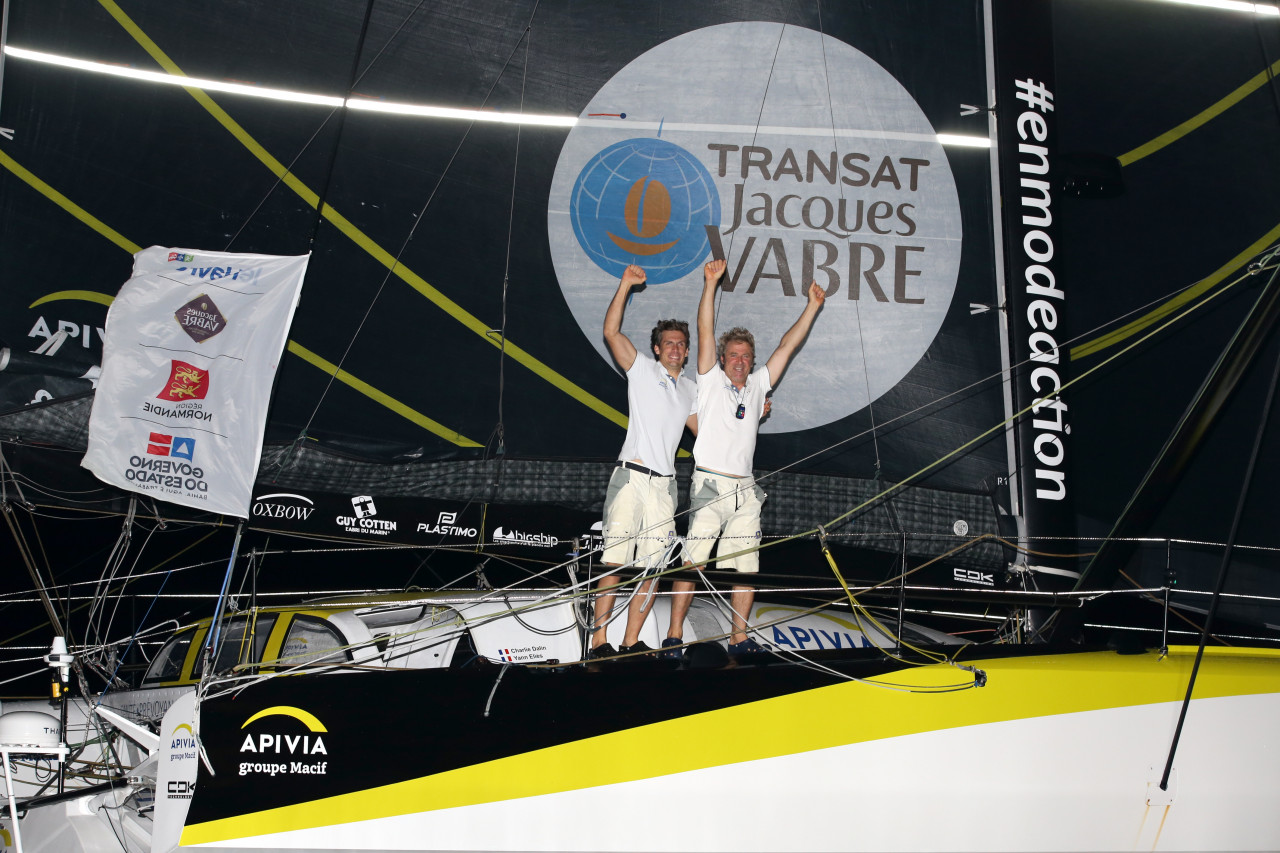 Charlie Dalin and Yann Eliès on their 60ft monohull, Apivia, have won the IMOCA class of the 14th edition of the Transat Jacques Vabre Normandie Le Havre after crossing the line in the Bay of All Saints in Salvador de Bahia on Sunday, November 10, 2019 at 00:23:00 (UTC ), 13 days 12 hours 8 minutes and 0 seconds.

Apivia covered the theoretical course of 4,350 miles at an average speed of 13.42 knots, but actually sailed 5,061.85 miles at an average speed of 15.62 knots.Despite the far less sympathetic conditions for this edition, they were only four hours outside the record set by Jean-Pierre Dick and Dalin’s co-skipper this year, Yann Eliès, (13 days 7 hours 36 minutes and 46 seconds).

Eliès, 45, joins elite company with his third victory in the Transat Jacques Vabre Normandie Le Havre, and retains his title having won the IMOCA in 2017. He won on a different platform, the Multi50 in 2013. It was his sixth edition overall.

For Dalin, the victory will be even sweeter. Born and raised on the waters around Le Havre, it quite possible that one of the thousands of young children introduced to an optimist by the Normandy Sailing League in the ten days before the start will go on to emulate him.

Apivia was not the great favourite, but some smart pundits favoured them pointing out they were a proven team having finished third together in the IMOCA in 2015 - Dalin’s only previous Transat Jacques Vabre. They were quietly confident at the start and they had one of only five latest generation foilers on the start line. The only thing against them was that they launched it in August and Charal had a year more to get to know their knew steed.

After a cautious start, Apivia were part of big pack in the Channel, all pushing hard. As they passed the first depression, they tacked south with a group led by Initiatives-Cœur. Charal took the lead but hesitated and adjusted course at Cape Finisterre, while a group of five IMOCA, including Hugo Boss, invested heavily in the west. The dividend they were looking for was completely lost in the inflation of a ridge of high pressure bubbling up four days later.

On October 30 at 19:00 UTC, Apivia took the lead of the race among the southern group. Upwind, the Verdier-designed boat, seemed to be very fast and dug out a small lead at the approach to the high-pressure ridge around Gibraltar. On November 1, at the end of the morning, Apivia sent an incredible video. It showed the black hunter, Charal, rolling flying over the top of them, apparently three knots faster in the light conditions that the Charal is particularly fond of. It was confident and generous to send the video, but did it show the vulnerability of Apivia at the entry to the northeast trade winds?

Charal had seized the lead and seemed to be remorselessly extending it. Apivia’s position seemed precarious as they entered the Doldrums with 11th Hour Racing having chased them down in the trade winds and drawn almost level.

But the Doldrums changed everything. Charal’s lead peaked at 120 miles on November 5 at 11:00 (UTC). Nobody could imagine at this time the worst-case scenario waiting for the black foiler. Charlie Dalin and Yann Eliès had the intuition and knowledge to shift 50 miles to the east. They were barely stopped as Charal stalled for days. Apivia emerged on November 7, already making 15 knots. The second-placed boat was no longer Charal but Banque Populaire, 225 miles behind. The Doldrums had cost Charal over 400 miles.

After that the only boat that could prevent their victory were the fishing boats off the coast of north-east Brazil. Just 72 miles from the line, Dalin said it was not their style to announce their victory and that they were still in “Transatlantic mode” enjoying beautiful day’s sailing on smooth water. Nothing was being taken for granted but for the last 1,000 miles they were literally coasting to victory.