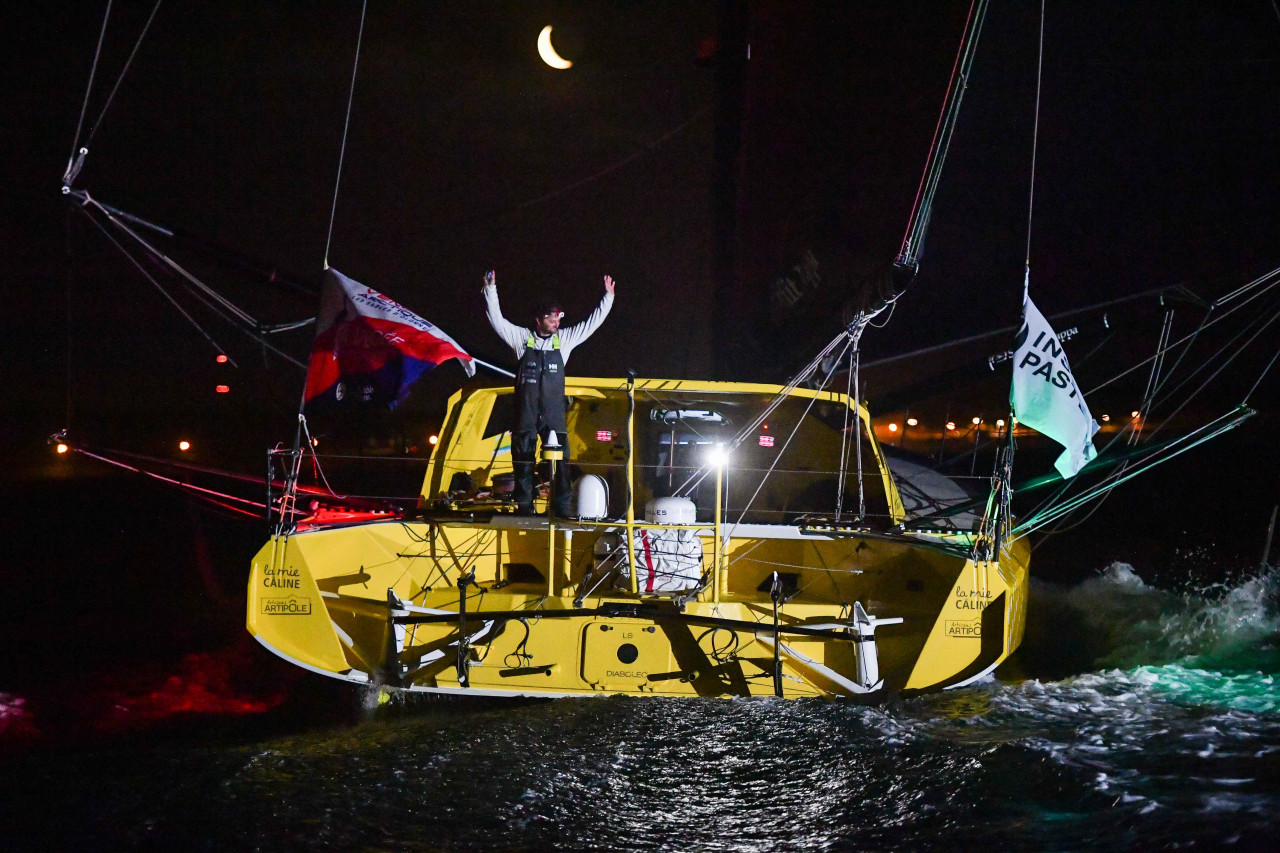 The skipper of La Mie Câline-Artisans Artipôle crossed the finish line in Les Sables d’Olonne this Thursday 16 July at 03h 35’ 31’’ (French time) after 11 days, 12 hours, 05 minutes and 31 seconds of racing.

He covered 3,191.20 miles at an average of 11.56 knots, which equates to 10.17 knots along the theoretical course (2,807.3 miles). Aboard his 2007 Owen Clarke design, with foils added independently by Michel Desjoyeaux’s company, the sailor from the Arcachon, adopted by the people of the Vendée, finishes 14th in the Vendée-Arctique- les Sables d’Olonne, 1 day, 6 hours  51 minutes and  23 seconds behind the winner Jérémie Beyou.

Having devoted his life to the Vendée Globe (three round the worlds) for the past 13 years, he was delighted to get back out on the water in solo format on a modernised and reliable boat. Arnaud would certainly have liked to vie more with the boats of his category (boosted older generation), however, the Vendée-Arctique-Les Sables d’Olonne fulfilled its role as a full-scale test: "Cali" will be ready to go on 8 November 2020 at the start of his 4th Vendée Globe.

“In competitive terms I’m a bit disappointed not to have managed to hook up with the chasing pack, but it was useful in that it enabled me to see the work that needs doing between now and the start of the Vendée Globe. The course was really full-on and intense on every level. I tried out lots of things on the boat and I didn’t break anything other than my jib tack, which I managed to do a temporary fix on. My boat is a safe! She’s sturdy and I can count on her. I tested a number of different sail configurations, which was interesting.

It wasn’t a summer trail! We didn’t have extreme conditions, but we did have some breeze and quite a lot of upwind conditions… a point of sail that doesn’t favour my boat. It reminded me that you get wet sailing an IMOCA!

The key lesson from this: when you have a group of boats in front, you mustn’t let up on the pace! Some sail better than me and at times like that I need to dig deeper than them on my boat if I want to hang onto them, because I’m slower.

However, the overriding sensation is not disappointment, rather it is the hope that I can do better in the Vendée Globe.

My programme over the coming days: a few days with the partners but no refit. We’ll haul the boat out in August to check the hull.

The Vendée-Arctique-Les Sables d’Olonne was a challenge for us. There are only three of us in the team. To be up and running for the start of this race was a mighty feat. However, it’s good to put yourself in the red too and it’s comforting for us and the partners to see that the boat holds the road.”