Beyou: we can’t sail this time but we still love this event 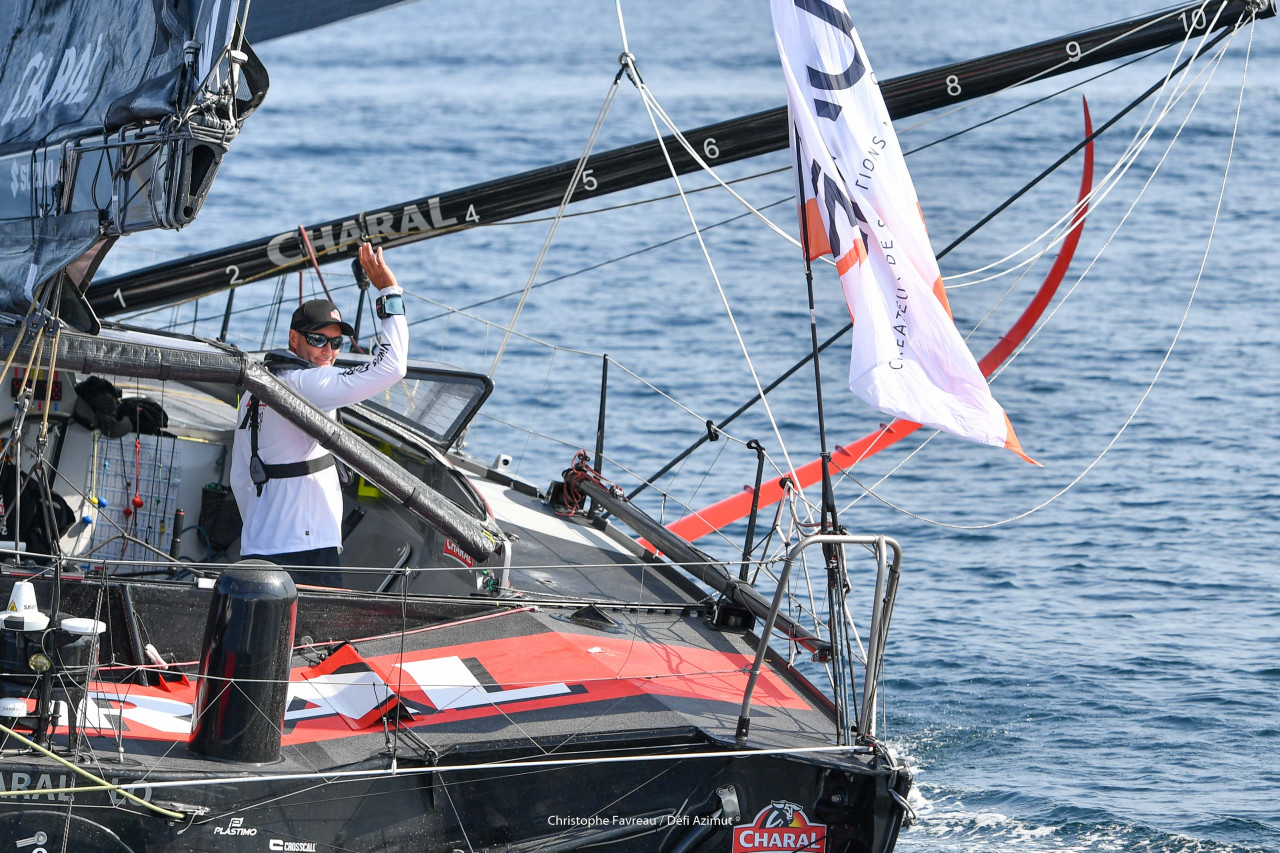 Jérémie Beyou is the defending Défi Azimut-Lorient Agglomération 48-hour race champion, who won the event on Charal alongside Christopher Pratt in 2020, but this year the pair will not be taking part as they await the finish of repairs to their boat.

The team’s IMOCA 60 was damaged as a result of a collision with an object in the water during last month’s Rolex Fastnet Race and will not be re-launched until next week. Beyou is naturally disappointed not to be able to take part in the class’s showcase regatta off Lorient.

“I really like the Défi Azimut so it is a shame we can’t sail here,” he told the Class. “But we didn’t cancel our participation – we are still going to have a big event with our sponsor team, with 100 people from Charal coming, and we will go outside the harbour in ribs and watch the speed runs.”

The skipper from Finistère in northwest France says this celebration of the class and its suppliers and sponsors has developed into a key part of the campaign calendar for IMOCA teams.

“The speed runs are a show,” he said. “They can demonstrate to people what top speed our boats are able to do and that they can fly – hopefully if we have enough wind. So it is a very spectacular moment and it’s unique – this is the only event that is built like this."

“And it takes place over just a few days,”he added. “What is important is it does not take 15 days – it’s not too long, just from Wednesday to Sunday – but it still shows everything that our boats can do.”Beyou also made the point that the race around the Isle de Groix in fully-crewed configuration, which concludes the Défi Azimut on Sunday, now has extra relevance given the participation of the IMOCA Class in the next Ocean Race."

Beyou says the delay to the Charal programme caused by the repairs to the boat has not been as impactful as it might have been because he and Pratt made excellent progress during a month-long training camp in Portugal in June. The pair were able to train in heavy weather and big seas day-after-day and work out how they wanted to sail the boat in the upcoming Transat Jacques Vabre (TJV).

“The camp was really, really good and afterwards we decided the set-up for the TJV and all the orders for sails was done, so the basics are OK,”said Beyou.

In the meantime the Charal team is looking forward to the launch of its new IMOCA in June next year. It will be the second IMOCA from the board of Sam Manuard and may well feature the same scow bow profile that we have seen on Bureau Vallée 3 (formerly L’Occitane En Provence).

Beyou, however, is giving nothing away at this stage. “What I am saying is Sam likes the scow boats,”he said with a smile, when asked if a similar bow profile was likely. “But we simulated everything, our two references – the current Charal and L’Occitane – and the new 11th Hour Racing Team boat, a big scow bow, a small scow and a normal bow.”

Interestingly Beyou is planning to carry out two-boat testing next summer with the new boat being put through its paces alongside the older one (a VPLP design launched in August, 2018). The Charal skipper believes this is likely to be a new trend in the IMOCA class with LinkedOut likely to be doing the same.

“You always have to find the marginal gains in a one-design class or a prototype like we have,”he said. “In prototypes you still have to keep this way of thinking, trying to find 0.1 of a knot of gain, but you have to stay open-minded and try to find radical solutions too.”

For Beyou the TJV is another stepping stone to his major long term goal – his fifth entry into the Vendée Globe. After two retirements, a third and 13th position after re-starting last time out, he is still determined to do himself justice on the toughest racecourse of them all.

He also loves the process and being part of a team dedicated to that single-minded objective. “Every morning I wake up and go to my base here and I see all the people around me working on new stuff and new designs and I feel like I never want it to stop,” he said. “If I could do it all my life, I would do that right now.”