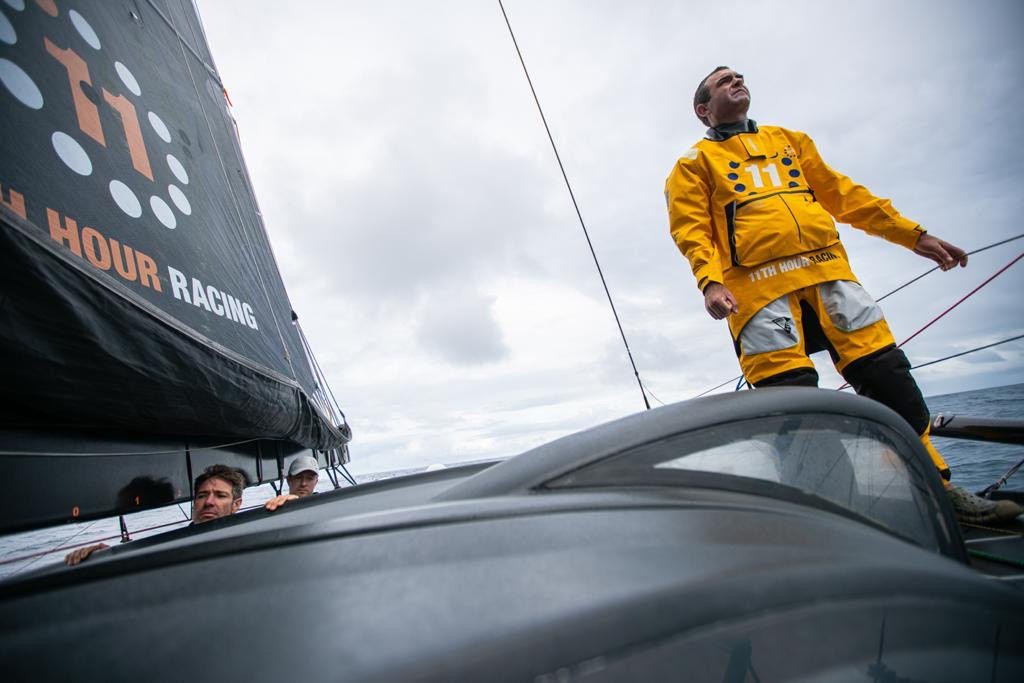 Charlie Enright, the co-skipper of 11th Hour Racing, believes the new schedule for The Ocean Race – with the next race due to start in October 2022 – will give his team and rival IMOCA entrants more time to make the best choices on all aspects of their campaign.

Enright spoke to the IMOCA website on the eve of his departure last week from Concarneau for Newport Rhode Island, leading a crew of six on board the team’s VPLP-designed foiler that it acquired from Alex Thomson’s syndicate last year.

Enright and his crew have been looking forward to getting back on the ocean after the hiatus caused by the Covid-19 pandemic and are using the transatlantic to test out a radical new foil design that the team has developed in partnership with the Mer Concept group.

As a fully-committed entrant into The Ocean Race, Enright and co-skipper Mark Towill have had to re-think their schedule around the new timetable, but they are already eyeing it as an opportunity.

“Some commitments were made, other commitments have since been put off,” said 36-year-old Enright. “Preparing for this campaign was always a balance between getting enough reps under your belt and making sure that you have the latest and greatest design and technology when the race starts up."

“So we have pushed some of the design decisions to the right and in some ways it’s a blessing because we get more sailing days and so our choice can be a little bit more calculated and methodical.”

In the meantime, Enright believes the organisers of The Ocean Race are taking significant steps to make it more attractive to IMOCA teams. “They seem to understand the need to migrate the rule and the documentation more towards that of the existing IMOCA fleet in an effort to get more entries, so that’s a great sign,”  he said.

And he added: “If The Ocean Race is going to re-examine some of the parameters around the race to accommodate the existing IMOCA fleet, then I think it is important that if those changes be made, members of the fleet step up and participate.”

The American two-time Volvo Ocean Race veteran who finished fourth in last year’s Transat Jacques Vabre alongside Pascal Bidégorry, also made the point that the extra year offers teams more time to attract sponsorship funding. He believes there are other teams in the fleet with sponsors who – like 11th Hour Racing – could benefit from the global platform the race offers.

“Certainly,”  he said, “at least 80% of the existing IMOCA teams are sponsored by entities with interests outside France and Europe.”

The 11th Hour Racing squad has been training in fully-crewed configuration and working on pushing their boat harder – as Enright put it “squeezing every ounce”out of it. They have also been developing ways to work on board that make the experience “live-able” in a highly unstable, noisy, wet and cramped environment.

“Yeah, we have made a little bit of progress on that,” said Enright. “We did a little research over the winter to try to make things a little more comfortable when it comes to bunks, and down below, and space and gear, and the galley and all that stuff. I’d be lying if I said it wasn’t crowded but at the same time, the Transat Jacques Vabre was an absolute whipping for me personally, so it is nice to have some extra hands.”

Enright says the new T-foil that the team is testing – a radical design that he describes as pretty “out there” – is an example of how the team has been able to push the boundaries with the extra time it has to focus on development, using the old HUGO BOSS as its platform.

“With the time that we had, the brief for our new foil was ‘make something that maybe you didn’t have the guts to make for a team that had the Vendée Globe right around the corner.’ We are making it known that this is probably not going to be our race foil,” he added. “We could step back from it or it could be the first step in a set of stairs – we’re not quite sure yet.”

Towill and Enright say their collaboration with Mer Concept is going well and is a good example of how the US and French sailing cultures can work together. “We always said that the success of our campaign is going to be getting the balance right between the Franco culture and the Anglo offshore culture – getting them to work symbiotically and efficiently – we think achieving that is our job as leaders of the team,”said Enright.

Once the boat arrives in Newport, Rhode Island – where the crew will make a socially-distanced arrival – it will remain there until at least the end of October. The US schedule includes sea trials, training and on-land initiatives associated with the team’s central mission on sustainability and ocean health.

The plan for later in the autumn has yet to be finalised. “We will take stock of what the world looks like then and go from there,” summarised Enright. The skipper says the team is interested in taking part next June in The Ocean Race Europe as part of the build-up to the round-the-world event.