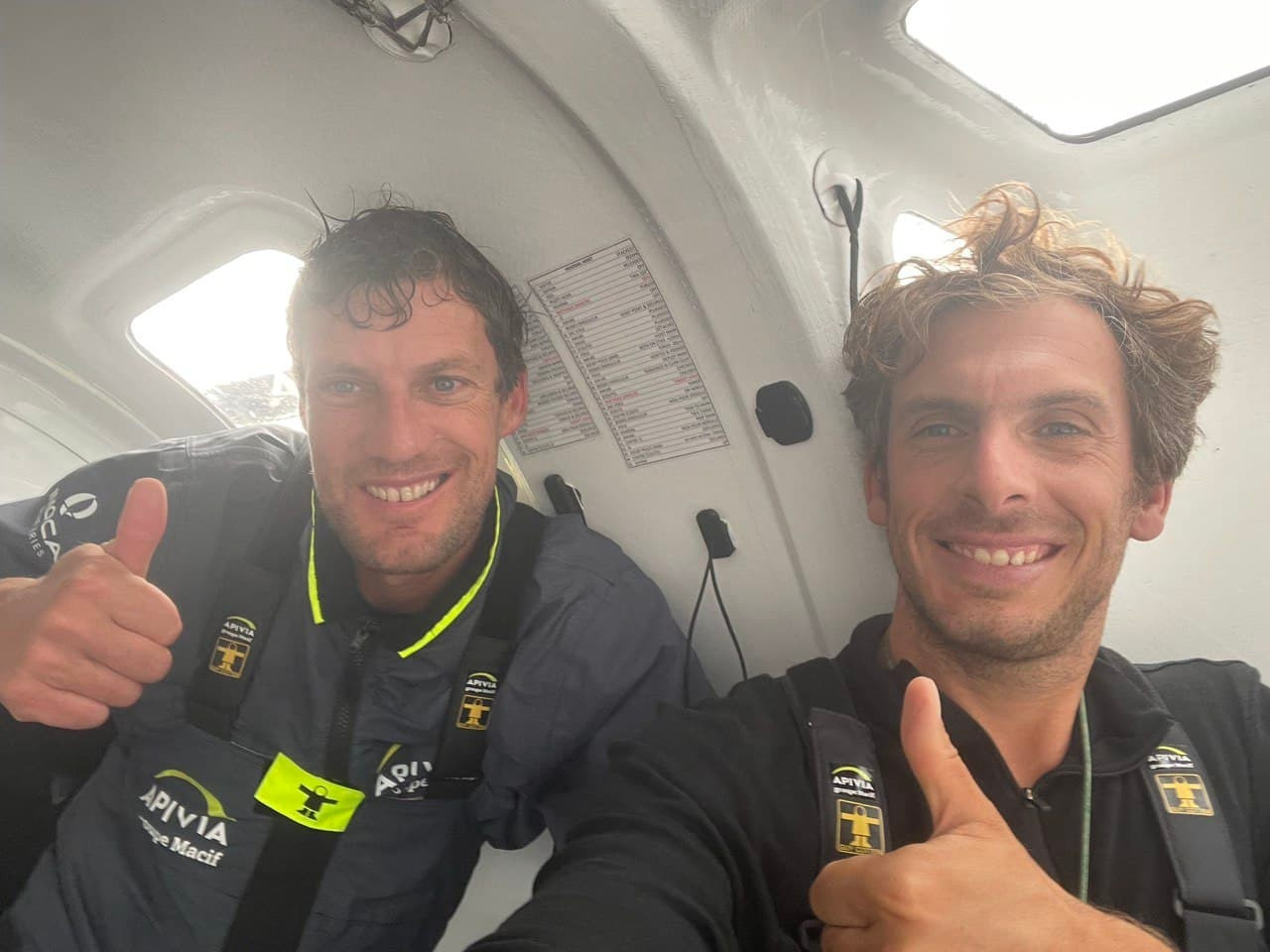 Twenty-four hours into the 49th Rolex Fastnet Race, Charlie Dalin and Paul Meilhat on Apivia were flying towards the iconic Fastnet Rock off the southwest coast of Ireland, with a 40-mile lead over Jérémie Beyou’s Charal.

The yellow and white IMOCA that took line honours under Dalin’s command in the Vendée Globe, has been in the lead from just after the start on Sunday in the now 11-strong IMOCA Class in a race that has featured tough upwind conditions.

Dalin and Meilhat led out of the Solent and then headed southwest, sailing for nine hours on starboard tack to within 30 miles of St Malo before tacking on layline for Land’s End. In their wake all the other IMOCA crews baled out earlier and paid a price for doing so, leaving Apivia well ahead.

“It was a really windy start, and a very windy Solent,”said Dalin from on board, as Apivia flew upwind at 15-17 knots on relatively flat water in the Celtic Sea on a northwesterly heading. “We were able to go pretty fast upwind, but it was pretty intense nonetheless."

“Once we got to the Needles we headed towards the south-west,”he continued. “The idea was to take advantage of a windshift and also the current and that worked out pretty well and now we are in the Irish Sea. It’s been a bumpy ride, but now we are foiling and its enjoyable – we have even had a bit of sun between the clouds, so we’ve got really nice sailing at the moment.”

Dalin said the routing to the south worked out better than he could have anticipated with the boat flying on port tack. Then, as they turned their bow to the northwest, they were able to enjoy the first of the west-going tide. “I don’t think we could have done it better,”he said.

His racing partnership with Meilhat, who won this race on board SMA in 2017, is proving a formidable one. The two Figaro veterans have never raced together before but the training they have done since May is now paying dividends.

“It’s going really well,” summarised Dalin. “The flow of information between us and the way we take turns trimming and stuff – it’s going pretty well and I’m happy with way the team is working.”

Even with a substantial lead over Beyou, and Sébastien Simon sailing with Yann Elies on Arkéa Paprec in third place, who are just a few miles behind Charal, Dalin knows this race is far from over with the possibility of lighter conditions at the finish off Cherbourg. He and Meilhat are taking no chances and keeping an eagle eye on the weather, as they prepare for the run back towards the Isles of Scilly.

“Sure it’s a great gap to have over Charal. Conditions are a bit unstable at the moment, so we are a bit slower than them probably but yeah, we are pretty happy with the lead,” said Dalin.

“But we are still a long way from Cherboug, so we are still focused on making sure Apivia is going as fast as she can and also looking closely at the weather updates and the Grib files. Every time they are updated we spend quite a long time checking what’s going on to make sure we are on the right course and our trajectory is good,”he added.

The 37-year-old skipper who is based at Port La Fôret, said his boat is in prime condition with no issues to report. “She’s all good,” he said adding that the flatter conditions after the rough afternoon and night on Sunday were making it easer to live and sleep on board when off-watch.

The IMOCA class has three boats in the top-10 at this stage of the race in terms of line hours ranking. They are mixing it with the Ultimes and the biggest monohulls in the 337-strong fleet in this edition of the Fastnet classic which, for the first time in its history, will finish at Cherbourg, not Plymouth.

Behind Arkéa Paprec, Simon Fisher and Justine Mettraux were holding fourth place on 11th Hour Racing, with Sam Davies and Nico Lunven in fifth position on Initiatives-Coeur and then Romain Attanasio and Sébastien Marsset on Fortinet-Best Western in sixth. Alex Thomson sailing with Ollie Heer was back in eighth place on HUGO BOSS, just a few miles behind Isabelle Joschke and Fabien Delayahe on MACSF.

Originally 13 IMOCAs were entered in the race but a collision in the pre-start with a cruising boat, which holed Maitre-Coq IV’s bow, meant that Yannick Bestaven and Roland Jourdain were forced to abandon the race and head for repairs in Portsmouth.

“It's sad and unfortunate because this race was the start of the school year, the return to competition. It was the first one for six months and the challenge was to qualify for the Jacques Vabre," said Bestaven shortly after the incident. "No one was hurt; that's the most important thing. The next step is to repair the boat, return to La Rochelle for a refit and then start training and qualifying again. As soon as possible!"