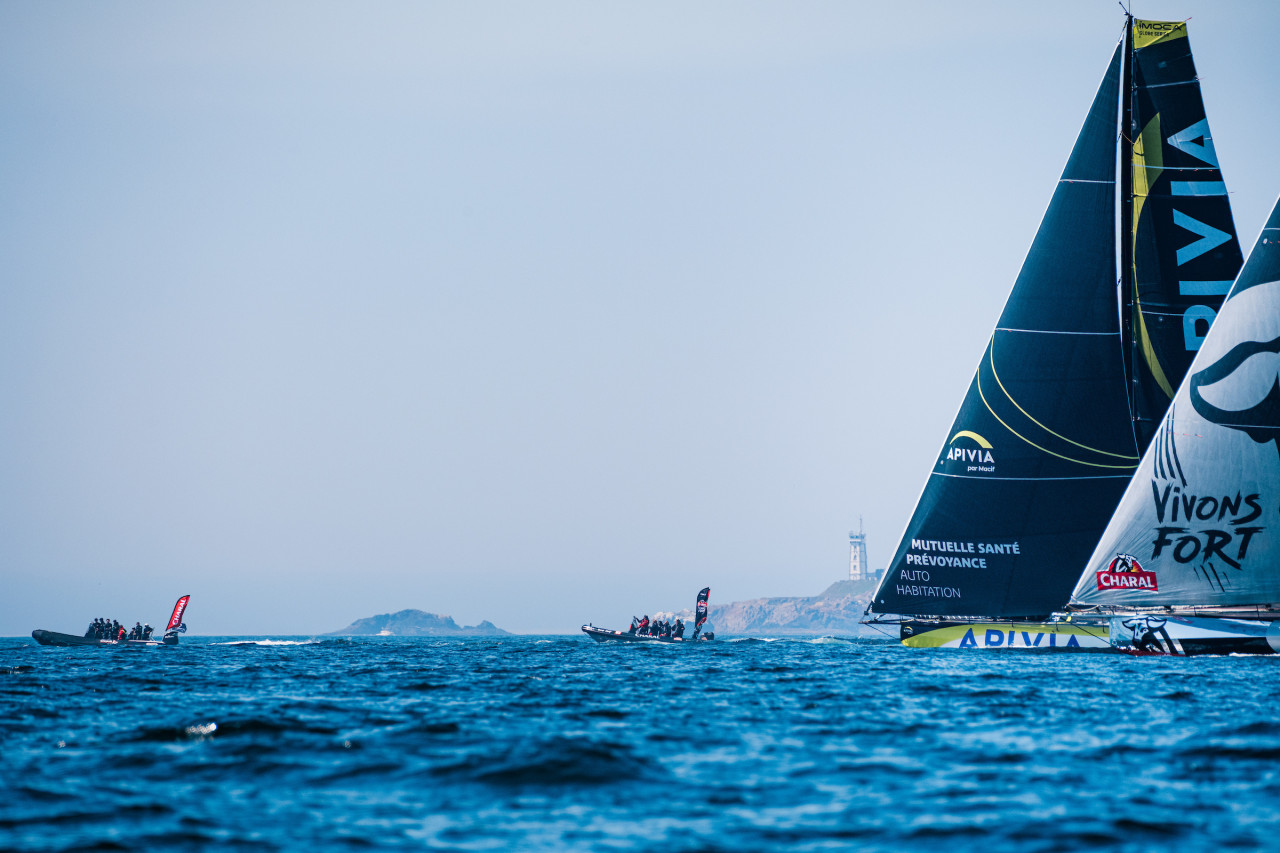 Who to pick out in the Guyader Bermudes 1000 Race? A fascinating early season school for new IMOCA skippers, new boats, new sponsors, new partnerships on a varied course on the western Atlantic ocean and the Bay of Biscay.

With a record-breaking entry of 24 skippers, 21 of whom made it to the finish, this was the best evidence yet of the extraordinary good health of the IMOCA Class as it enters another exciting year dominated by the Vendée Arctique, and then the Route du Rhum-Destination Guadeloupe.

In its simplest terms it was won by the form skipper in the IMOCA Class, the relentless Charlie Dalin on APIVIA who was followed home, more than half a day later, by his compatriot and longtime rival Jérémie Beyou on Charal. The third player in that trio would have been Thomas Ruyant on LinkedOut, but gremlins in the steering system on that boat forced his early retirement.

But it was no surprise to see those three sailors dominating this 1,200-mile race, in proven, competitive, well-funded boats that have been optimised to the limits.  The big question now is how well each of those campaigns will go as they transition to new boats, with Beyou the first to make the step in his new Sam Manuard design in time for the Route du Rhum, and then Dalin and Ruyant following suit early next year.

Behind them a contest that started in light winds, and then saw big breeze at the Fastnet and again at Finisterre, was always going to be a challenge for skippers in new machinery. The first to finish was Louis Burton in Bureau Vallée, securing third place on the former L’Occitane en Provence (also from Manuard’s board) which had dismasted in the Transat Jacques Vabre.

Then came the first standout performer outside the podium places as Nicolas Lunven crossed the line off Brest in fourth place, less than an hour behind Burton on Banque Populaire, the rented former Groupe APICIL, a non-foiler originally launched way back in 2008.

Lunven, who is standing in for Clarisse Crémer who is expecting a baby, had no right to be in the top-four in that boat. But he showed his pure class as a racer with a rich pedigree in the Figaro fleet – he’s won that toughest of competitions twice – as he tackled everything the race threw at him and almost made the podium.

It was an outstanding performance by the 39-year-old originally from Vannes, who had not competed solo in an IMOCA before and had not raced alone for five years. He got the best start of the non-foilers right on Dalin’s tail, and then settled into a strong position inside the top-five which he never relinquished, making smart tactical choices along the way. At the finish he held off Isabelle Joschke who had a good race, finishing fifth on MACSF, and Benjamin Dutreux who was sixth in his first outing on Guyot Environnement-Water Family (the former 11th  Hour Racing Team-Alaka’i).

Lunven came ashore talking about what he still has to learn. “It’s important to know where to place the cursor in terms of risk-taking, performance and commitment,” he said. “This was a point on which I learned a lot. It’s a learning process that takes place both for myself and on the boat. It’s specific to each IMOCA – it depends on each boat. In this race, I felt my way around a bit, so I hope I made progress on that point. After that, it was interesting to play on the water because there were some strategic moves to make. I was not bored!”

Just inside the top-10, the Kiwi/USA skipper Conrad Colman did an impressive job on Imagine, (the former V and B Mayenne) on his first return to the IMOCA class since completing the 2017 Vendée Globe. He finished third in the non-foiling division behind seventh-place Eric Bellion on COMMEUNSEULHOMME powered by Altavia.

Then came another outstanding performer in Benjamin Ferré, the 31-year-old Breton sailor and adventurer who is starting his journey to the Vendée Globe under the tutelage of Jean le Cam. This was his first race in the IMOCA Class on board Benjamin Envoie Le Pépin (the former Banque Populaire X).

The young Frenchman, who was third in the Mini Transat in 2019, was always in the mix and ran as high as seventh at one point before finishing 11th. “I wanted to finish the race for myself and I also wanted to do well because there are a lot of people who have trusted me for the last six months, including Jean le Cam and all his team, Gildas Mahé and Pierre Brasseur and the sponsors,” he said at the finish. “This first race has made me want to find more performance because, even though I don’t know the boat well at all, I can see the potential she has. I tried to do the best I could, to test things. I tried to push it to the limit and bring it home.”

Another newcomer with an adventuring background is Guirec Soudée, who has set his sights on the Vendée Globe after a remarkable career exploring the high seas in both yachts and rowing boats. On debut in the IMOCA Class on Freelance.com (the former OMIA-Water Family), he showed his mettle, finishing 16th, just over an hour behind Swiss sailor Alan Roura on Hublot (the former Hugo Boss).

Soudée was disarmingly honest about what was a steep learning curve on the racecourse when he arrived back in Brest. “There were moments when the boat was working really well and I was even quite surprised to find myself side-by-side with sailors who have a lot of experience,” he said. “And then there were other times when I was making other adjustments, but I didn’t feel like it was working and I didn’t understand why. I don’t have all the keys yet – the main goal was to finish this race.”

Just like Ferré, this had been an auspicious debut for Soudée and we can expect even better things from both of them to come.

Alongside Roura, Britain’s Pip Hare was another skipper in a powerful foiling machine who was finding her way in her first competitive outing – in her case on board Medallia, the former Bureau Vallée 2. After a poor start in light winds, Hare was always playing catch-up and ranked as high as 13th. She was eventually classified in 17th place after incurring a 90-minute penalty for breaking the seal on her engine, something she did by accident while charging her batteries.

“It’s not been my best race,”admitted a disappointed and bruised Hare who had targeted the top-10 on debut in her new boat. “I had a complete disaster in the light stuff and then, in the heavy stuff, the boat was going really well but I got thrown backwards across the cabin. I’ve got big bruises all over my back and have cut my head.” Like the physical battering she took, she described the penalty as “painful.”

Like a lot of the skippers in the Guyader Bermudes 1000 Race, you get the feeling that Hare will be out to make her mark the next time she hits the IMOCA racecourse, when the Class takes on the second edition of the 3,500-mile Vendée Arctique that starts from Les Sables D’Olonne on June 12th