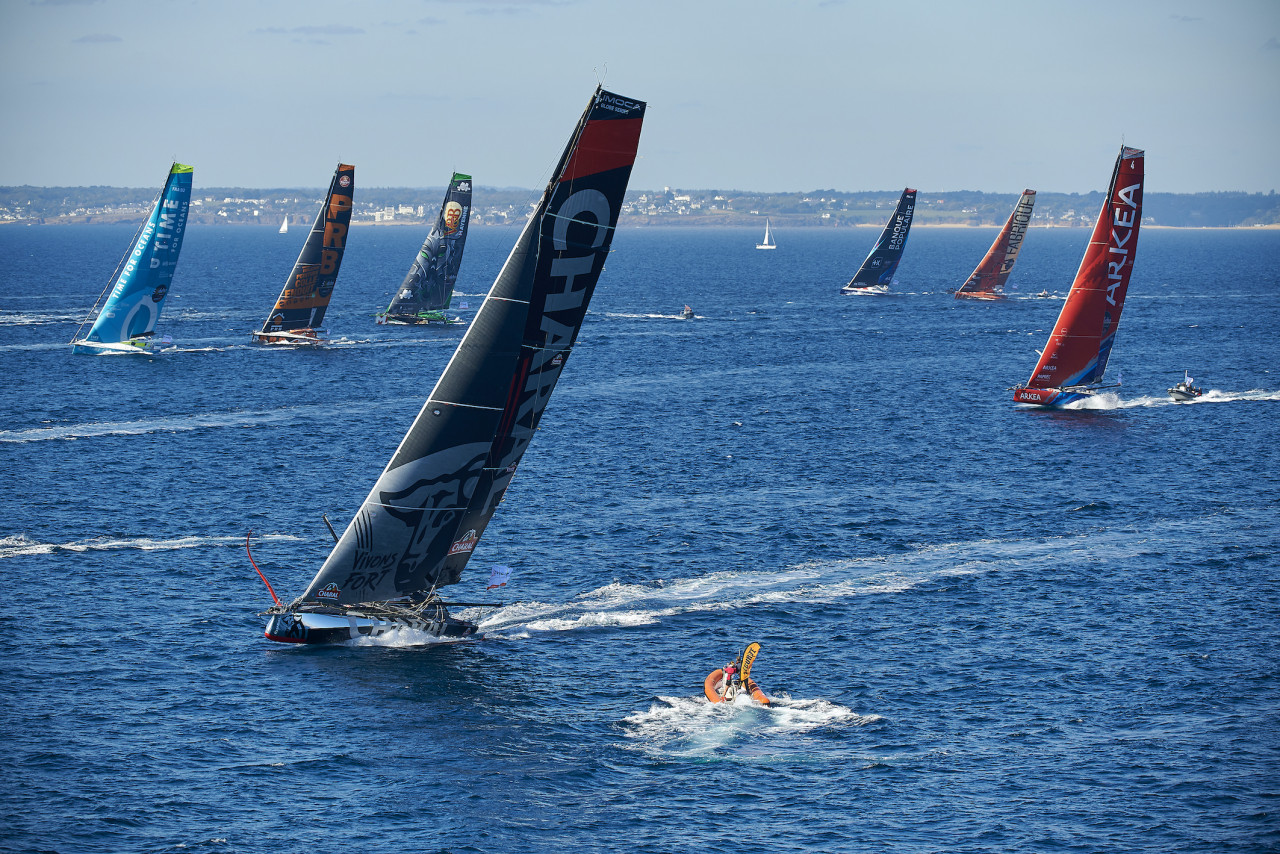 A sports meet and social occasion organised by the Lorient-based company Azimut (digital solutions), the Défi Azimut, the eleventh competition of this name, remains a rather atypical event.

Putting the skippers to the test in three different exercises over five intense days (Speed runs, 48-hour sprints and the Tour de Groix round island sprint), this year the race officially forms part of the IMOCA Globe Series Championship. With the notable support of the Lorient Agglomération and the Brittany Region, the Défi Azimut is once again set to involve some fantastic battles out on the water, as well as some top-level exchanges on land with a number of competition-related themes.

After a fabulous singlehanded edition in 2020, we make way for the double-handed format in 2021, just eight weeks before the start of the Transat Jacques Vabre. The Notice of Race has already been published on the official website www.defi-azimut.net and registration is now open, so the countdown has begun!

This year, Sylvie Viant is taking on the role of Race Director, teamed up with Hubert Lemonnier, both of them highly experienced with a close relationship to the racers. It is this duo who will be monitoring the competition, the high point of which will be the 48H AZIMUT, a course spanning at least 500 miles (and up to 700), contested in double-handed configuration plus an on-board report (media person). It is this race, which will see the participants awarded points that count towards the IMOCA Globe Series Championship.

Around twenty or so duos are expected to take part in the five days of top-class races from 14 September. The duo of Jérémie Beyou and Christopher Pratt will be defending the title that Jérémie secured back in 2020 on Charal and they’re sure to have their work cut out against an armada of foilers, several of which have changed hands since the Vendée Globe. For the latter group, the Défi Azimut will be a highly instructive experience over a variety of formats conducive to performance comparisons. For those who have held onto their round the world steed with a view to optimising them, as is the case for skippers like Charlie Dalin who’s pairing with Paul Meilhat on APIVIA and Thomas Ruyant supported by Morgan Lagravière on LinkedOut, they’ll clearly be targeting the gold medal in this competition. Finally, among the IMOCAs with classic daggerboards, skippers Damien Seguin and Benjamin Dutreux on Groupe APICIL will certainly be the men to beat given their excellent track records in this category.

For one week, La Sellor, manager of Lorient La Base, will host the teams with a range of high-quality facilities, with the invitation being extended to the media and an organisation team of 60 people.

With the Pays de Lorient and Brittany placing their strategic chips on offshore racing, as evidenced by the redevelopment of the submarine base, a sector of excellence with worldwide recognition has been able to be developed there. Synonymous with innovation, jobs and events, the benefits of top-rank sailing in the region extend far beyond the sports domain. Indeed, it is a favourable context for coming together to consider the many environmental and societal challenges during a series of conferences and round table events organised at the very heart of the event.

As such, the Défi Azimut is the perfect annual platform for shining a spotlight on the amazing energy drummed up by offshore racing in Lorient on Brittany’s Atlantic seaboard.

“Sport, innovation and human and collective engagement make offshore racing a real asset in Lorient and in Brittany. Put plainly, it is utterly unique. Bringing together the authors of this success, both on land and at sea, is what drives us at Azimut. This year, we’re offering you the chance to travel from Lorient to the Orient, in a journey filled with cultural surprises, as well as a series of exchanges along the exemplary themes of regional dynamism: architecture, composites and inclusion... For the sailors, it will be another refined competition and we’re very proud to now be an official event in the IMOCA Globe Series Championship, which is the best possible form of recognition of the event’s sporting quality,” Jean-Marie Corteville, creator of the  Défi Azimut and President of Azimut.

“We’re delighted to be playing host to the Défi Azimut in the Pays de Lorient. It’s an offshore race on a sea of possibilities, a major sporting, human and technological challenge, which also showcases the multiple fields of excellence in our region, its ability to organise and innovate, along with its vitality and its expertise,” Fabrice Loher, President of Lorient Agglomération, Mayor of Lorient.

“Brittany is passionate about sailing. The Défi Azimut is one of the many races which liven up our coastline. The Brittany Region is proud to partner an event, which brings our taste for innovation, sport and the desire to be together to the fore,” Loïg Chesnais-Girard, President of the Brittany Region.

The key topics of the 2021 edition, developed in the form of round table events and meetings

3 – Committed IMOCA skippers and athletes – “Racing at the top-level for oneself and for others, they tell us why commitment is a driver too,” with various athletes.

4 - Lorient La Base - "From reconversions to the future of the bases in the 21st century, what place for heritage?" with the University of Southern Brittany - UMR CNRS TEMOS and the City of Lorient (Heritage Department)

Highlights of the 2021 edition

14:00 hrs: ‘Boat Building Innovation Workshop’ The Ocean Race
17:00 hrs: Compulsory presence of all the IMOCAs in the port of Lorient La Base
18:00 hrs: Evening opening of the Défi Azimut with the skippers (invite only)

AZIMUT RUNS – TIMED FOR CREWS
11:30 hrs: HIT round table “Turning a handicap into an asset for one’s region” with Damien Seguin
15:00 hrs: Availability of the Race Committee, 4 attempts maximum per competitor
19:00 hrs: Prize-giving for the AZIMUT RUNS