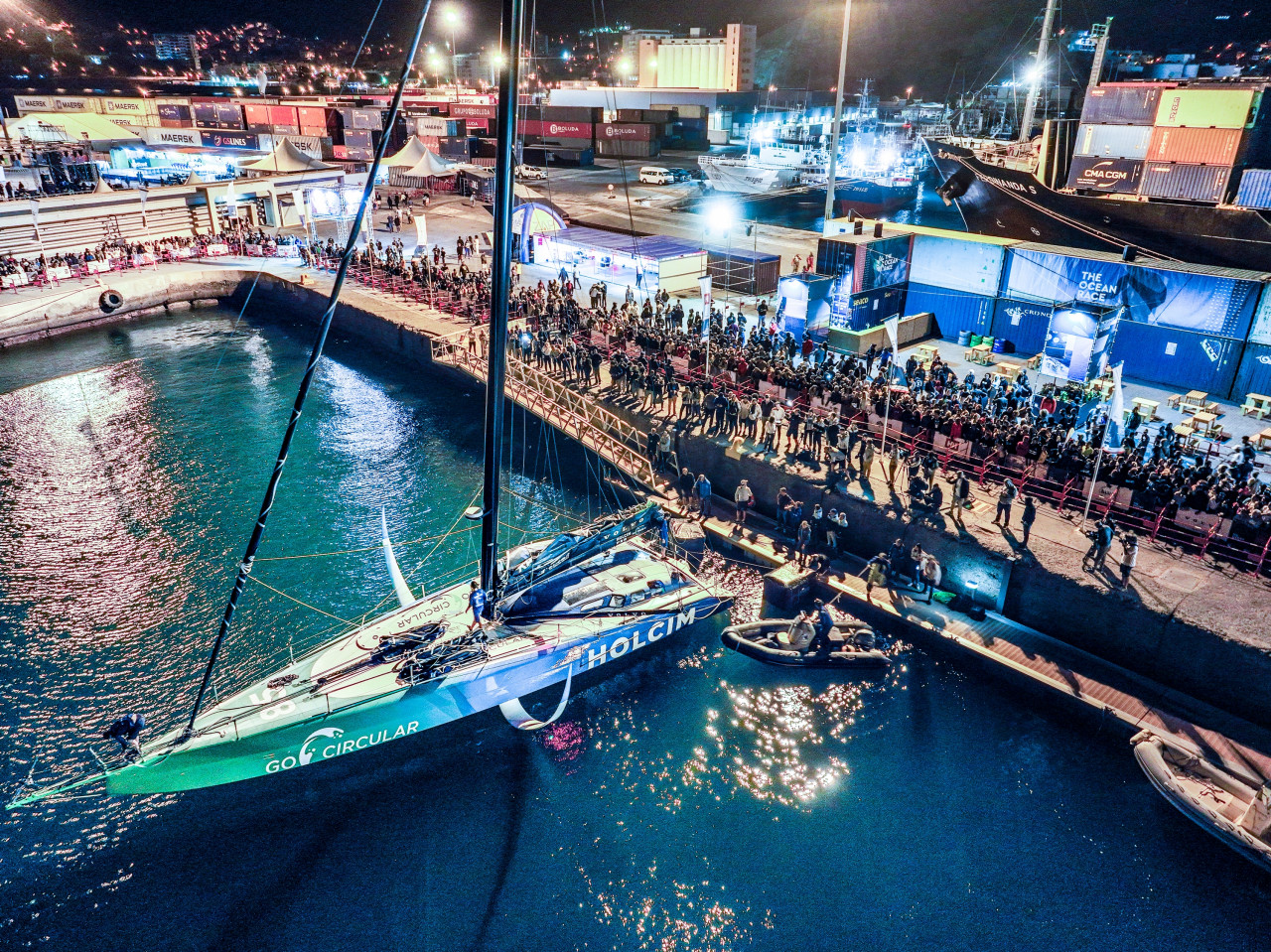 Fully-crewed racing in IMOCAs in The Ocean Race has been on the Class’s horizon for months – if not the last couple of years. In the team bases and bars on the Brittany coast, the chat has been about how the boats would perform, how the crews would cope and whether the hardware would be up to the test.

Now we have our first answers, after a thrilling first leg of the race, won in convincing style by Kevin Escoffier and his team on Holcim-PRB. They reached the finish at Mindelo on the northwest corner of the Cape Verde archipelago in the early hours of this morning, followed just under three hours later by Charlie Enright and his crew on 11th Hour Racing Team.

Then – another two hours and 45 minutes later – came Boris Herrmann on Team Malizia, while Paul Meilhat on Biotherm and Benjamin Dutreux on Guyot Environnement-Team Europe looked set to complete the order, in fourth and fifth places respectively.

This was a serious test of men and women and machines. The 1,900-mile leg from Alicante saw everything from light winds to storm-force headwinds, and then power-reaching and running conditions out on the Atlantic. And in general the boats and the sailors pioneering this new venture have come through it pretty well. The crews coped with horrible conditions early in the leg, and then the boats displayed spectacular speed once released on the Atlantic.

There was sea-sickness and people could not eat or sleep during the first two days, but the top-three crews have arrived in Mindelo still talking to each other – in fact, they all seem happy enough, if relieved to have arrived. Far from falling apart under this sort of pressure, they appear to be growing stronger as team units.

The boats, meanwhile, have accumulated long “to-do” lists for the sailing teams to work on during this short stopover. But, so far, there is no sign of any damage that could stop a boat from continuing in the race on leg two to Cape Town, which starts on Wednesday. On Team Malizia, crew member Will Harris gave us a bit more detail about a jobs list running to about 40 items.

He said most of them were small things to do with the running rigging or hardware that were “performance issues”– so not critical infrastructure. But there are one or two more important issues that they have to get sorted. They include the propeller shaft gasket, which leaks when the boat sails at more than 15 knots. It means one crew has had bail out that area of the boat every 20 minutes, which is a major distraction.

At Mindelo, the Team Malizia sailors are going to try to fashion a cover to stop the leak spreading that they hope will work until the boat reaches Cape Town. A matter of concern is that the water ingress may have damaged one of the two water-makers on board and that could put it out of action, cutting their water-making capacity by half. The other major issue on Malizia is the mainsheet constrictor in the cockpit, which has broken. This is a device which allows the crew to lock the mainsheet off and free its winch for other duties. With the constrictor out of action, the sheet has had to sit on a winch the whole time, reducing crew flexibility through manoeuvres. Harris will be trying to affect repairs at Mindelo.

Despite the impressive high speeds going downwind past the Canaries, the watchword on board the top-three boats, seemed to have been about trying to sail conservatively. In his comments on the dockside, Escoffier mentioned that his crew were not sailing the boat at 100% of its full potential, most of the time. “I don’t want the others to think that they can catch up with us at certain speeds,”he said. “When the others (accelerated), we speeded up twice as much, to show that we still had some speed left.”

On Mãlama, Jack Bouttell, indicated the same over-riding principle of caution was the order of the day. “Obviously, sailing solo on IMOCAs, you hit the limits a lot earlier than sailing with a crew,” he said. “But the boats are quite fragile, so it’s managing the speed versus the fragility of the boat and not going too crazy. We are still trying to find that limit because, at times during the leg, we saw little things break which weren’t worth it for the gain in speed. So yeah, it’s a learning game at the moment – how hard we can push the boat while still being in the race.”

On Team Malizia, the focus was always on the new foils and the loading they could take, as Harris explained. “We were sailing very conservatively on this leg with the foils,” he said. “We were having to be very careful with them. We seem to have a good few alarms during the leg. So far, so good, they are not broken and they seem to be performing very well. But we are having to sail at 70% of their full capability and we have really got to get them to Brazil or else we will be in trouble.”

“It was crazy,”added Harris, “because every time we had an alarm go off on the boat, it was like ‘I hope it’s not the foils – the one that’s going to break it.’ You have to be so on it – ready with the autopilot the whole time, ready to bear away to stop it from overloading.”

Escoffier knows from past experience, as a member of Dongfeng Race Team in the last Volvo Ocean Race, just how long this race is and how the fortunes of a crew can change during 32,000 miles of competitive action. Naturally, he was not drawing too many conclusions about the relative performance of each boat from what happened on this leg.

“The boat is great,” he summarised. “Both upwind and downwind and reaching, we have always been fast. It’s a first victory on this new boat after a very nice Route du Rhum. It doesn’t mean anything about the final result, there’s still a lot of work to be done.”

However, this leg does suggest that 11th Hour Racing Team is on the pace – something we all expected but could not be sure of – while Team Malizia’s nervousness about being slow in light conditions was not born out in practice. Harris says it was a tactical error in the transition zone off Cabo de Gata, not a lack of boatspeed, that saw them fall out of the leading places at that stage.

The Englishman said the weakspot in their boat is more likely to be in medium conditions than light ones – 10-20 knots and during take-off. But, he said, once the breeze ramps up, the VPLP-designed flying machine is phenomenal. “As soon as the wind is blowing more than 20 knots, it just lights up and takes off. I think we’ve got a real advantage there because the first half of the race is going to be in those big conditions, so we will start the next leg with good confidence,” said Harris.

Let’s leave the last word to a newcomer to the Class, the hugely talented Tom Leperche, a key player on Escoffier’s crew. How did he find his first go at fully-crewed ocean racing on an IMOCA, which was also his first sail in a race in an IMOCA in any kind of crew configuration?

“It was really interesting for me to find out what it was like, and learn how to operate the boat,”said the 25-year-old winner of the 2022 Solitaire du Figaro. “The boat has a lot of potential, she goes pretty fast, but we still need to improve. With the foils, they are difficult to keep up at high speeds. They can go very fast, but it requires very fine tuning so, when you are sailing solo, you can’t stay at 100% of your potential for long. With a crew,” he added, “there is always someone on hand to regulate the flight trim, the balance of the boat and the balance of the sails, so it’s certainly more efficient.”