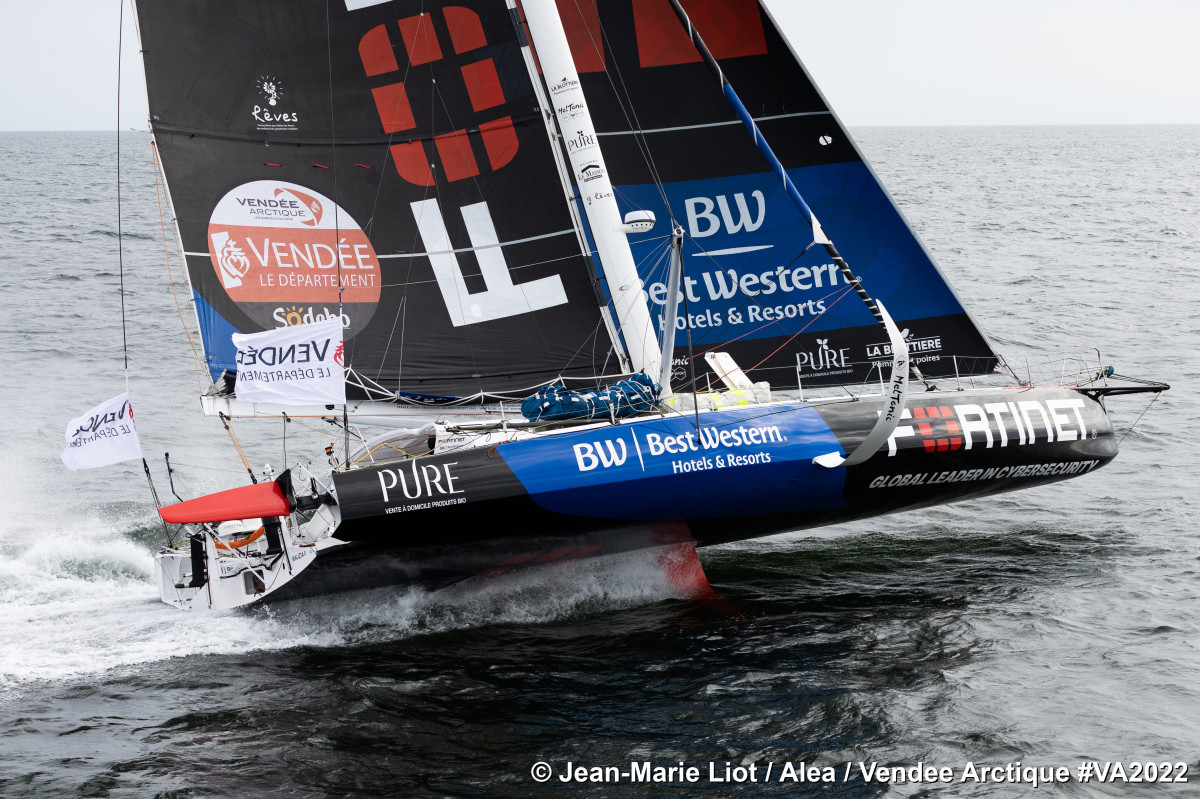 A fast first night of the Vendée Arctique Les Sables d’Olonne has seen the skippers on the latest generation, fast foiling IMOCAs sustain average speeds of over 25 knots in ideal conditions as they charge westwards towards a ridge of high pressure 150-200 miles wide which will see speeds plummet later today.

Separating slightly to the north of his closest rivals Romain Attanasio (Fortinet-Best Western) is judged to be this morning’s early leader – being closer to the theoretical direct, ideal course to the next waypoint of the course – whilst Charlie Dalin (Apivia) is furthest to the west and has been quickest overnight.

The winner of last month’s Guyader-Bermudes 1000 race Dalin was just over half a nautical mile ahead of nearest rival Jérémie Beyou (Charal) who won the first edition of this race back in July 2020.
In the NNE’ly breeze of between 17 and 20kts Attanasio is sailing a higher angle but was making about 1.5-2kts slower than the faster foursome Dalin, Beyou, Thomas Ruyant (LinkedOut) and Louis Burton (Bureau Vallée).

The skippers are monitoring the evolution of this high pressure ridge which runs SW-NE blocking their course. As they unfold their strategies – seeking to cross at the narrowest point and emerge into the stronger, favourable SW’ly wind on the other side – their courses will curve more northwards today.

Speeds will slow towards midday as they get into the light airs. Tonight promises to be complicated in very light airs whilst the leaders should escape tomorrow morning. "The best average speed over 15 minutes last night was 29.4 knots," reported Yann Chateau, assistant race director this morning, "The boat was going very hard last night,"said Swiss skipper Alan Roura (Hublot). "It's a bit difficult to find a rhythm. I snacked on carrots because heating water is complicated. On the sleep side, I just managed to grab 20 minutes.”

Japanese racer Kojiro Shiraishi (DMG MORI GLOBAL ONE) is in tenth this morning whilst Kiwi Conrad Colman (Imagine) is well positioned in 12th.

Hungarian skipper Szabolcs Weores arrived back at the Vendée Globe pontoon in Les Sables d’Olonne at about 0200hrs HF and reported, “Before the start we realised we had some issues with the keel. My technical crew was on board and had started to work on it. We realised that on the port side the keel was at the wrong angle and then we could not cant the keel to port. And so we don’t know what the solution is right now, we can see what is happening and we cannot cant the keel. I hope we can get it repaired. We have no fixed plan yet but are working on it.”

Updates direct from the skippers this morning

Louis Burton:  “The start of the race on Bureau Vallée was fast as it was for the rest of the fleet I think on a with a very fast reaching leg. I saw peaks at 35 knots! You have to get into the rhythm straight away there is no choice. I slept three times 20 minutes. I'm going to attack the high ridge quite south, where I wanted to go. »

Antoine Cornic (EBAC Literie): “ It was an emotional start a bit of a foretaste of the Vendée Globe perhaps. I haven’t had too much trouble getting into the rhythm of the race but I have I had two or three problems on the boat, including a complete blackout of electricity but I got it back quickly. I had a little diesel leak which has left a  bad smell. It was windy last night, things have progressed well, I haven't slept much, I'm going to take a little nap before the sun rises and the conditions really change. The strategy for approaching the ridge seems clear to me, I am the most northerly competitor in the fleet. The ridge looks less thick up there, which is why I made the decision to “climb” to try to cross it to the north."

Sébastien Marsset (Cap Agir Ensemble #SponsorsBienvenus): “My first night went well with a beautiful moon in windy conditions. The reaching  course was fast. We had to stay on it all the time as it was gusty. The wind has eased a bit at daybreak. Everything is going well on board. It was a bit emotional leaving land and it takes a little time to recover from that. Now we will have to think about strategy this morning depending on the position of my rivals and the next weather files. The one thing that worries me is that I was cold already last night, how am I going to be in the north, up there?”