First idea of the pecking order at the Fastnet Roc 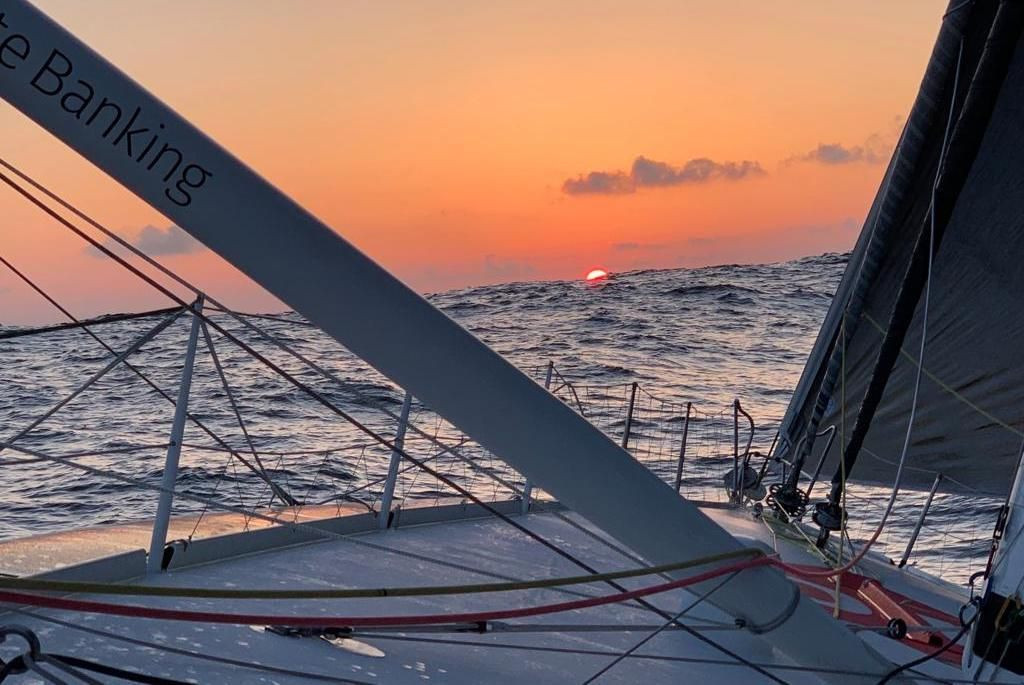 At 0715hrs (UTC) on Saturday 11th May, Sébastien Simon was the first to round the Fastnet rock to the south of Ireland, the first waymark in the Bermudes 1000 Race between Douarnenez and Brest.

At 0715hrs (UTC) on Saturday 11th May, Sébastien Simon was the first to round the Fastnet rock to the south of Ireland, the first waymark in the Bermudes 1000 Race between Douarnenez and Brest. Sam Davies, Boris Herrmann, Yannick Bestaven and Maxime Sorel followed him. On Saturday at noon, all seventeen solo sailors that set off in this first event of the IMOCA Globe Series were still racing with some significant gaps after less than two days of racing.

There is still a long way to go, as the competitors have to round a virtual mark off the Azores before heading back up to Brest and the finish of this very tactical 2000-mile race.

The first leg of the Bermudes 1000 Race, between Douarnenez and the Fastnet rock (290 miles) was demanding for the 17 sailors, with several transition phases to deal with. However, the 14 men and three women were able to find their feet without pushing too hard. That is good news as the event is taking place fairly early in the season, and some of the IMOCA boats were relaunched late with six sailors discovering solo sailing in this maiden event in the 2019 Globe Series.
Four foilers leading the way and Sorel surprising everyone
Since the start in Douarnenez on Thursday at 1500hrs UTC, the competitors have had a lot of manoeuvres to carry out and have not had much sleep. Rounding the Fastnet Rock to port has given them an idea of the pecking order and the difference s between the boats. Sébastien Simon was the first to round the rock at 0715hrs UTC. Just an hour later at 0815hrs Sam Davies was next followed by Boris Herrmann (at 0900hrs) and Yannick Bestaven (at 0915hrs). Conditions remain perfect with the sun out, ten knots of wind and some nice photos. The favourites are performing well but the big surprise is Maxime Sorel who in his first IMOCA solo race rounded the Fastnet in fifth place at 0930hrs.

A tightly packed group and some big gaps
At noon today (Saturday), Damien Seguin was approaching the Rock followed by a tightly packed group including Stéphane Le Diraison, Fabrice Amedeo and Clément Giraud. The fleet of 17 IMOCAs is stretching out with at noon, 84 miles between Sébastien Simon and Alexia Barrier, bringing up the rear.
The next waypoint off the Azores
After rounding the Fastnet, the skippers are heading for a waypoint 820 miles off the Azores. For the leaders, there is a patch of light airs to deal with, before the wind builds from the SE and strengthens further tomorrow. The skippers should achieve some good speed sailing upwind. Based on the latest simulations by the Race Directors, the leaders should reach this waypoint off the Azores on Tuesday evening. That is when we’ll see the state of play again.
Order of rounding the Fastnet Rock (in UTC):
1. Sébastien Simon (ARKEA PAPREC): at 0715hrs
2. Sam Davies (Initiatives-Cœur): at 0815hrs
3. Boris Herrmann (Malizia Yacht Club de Monaco): at 0900hrs
4. Yannick Bestaven (Maître CoQ): at 0915hrs
5. Maxime Sorel (V&B-Sailing Together): at 0930hrs
The next competitors expected at the Fastnet:
6. Damien Seguin (Groupe Apicil)
7. Stéphane Le Diraison (Time For Oceans)
8. Fabrice Amedeo (Newrest-Art & Fenêtres)
9. Clément Giraud (Envol by Fortil)…
Share
Facebook Twitter LinkedIn