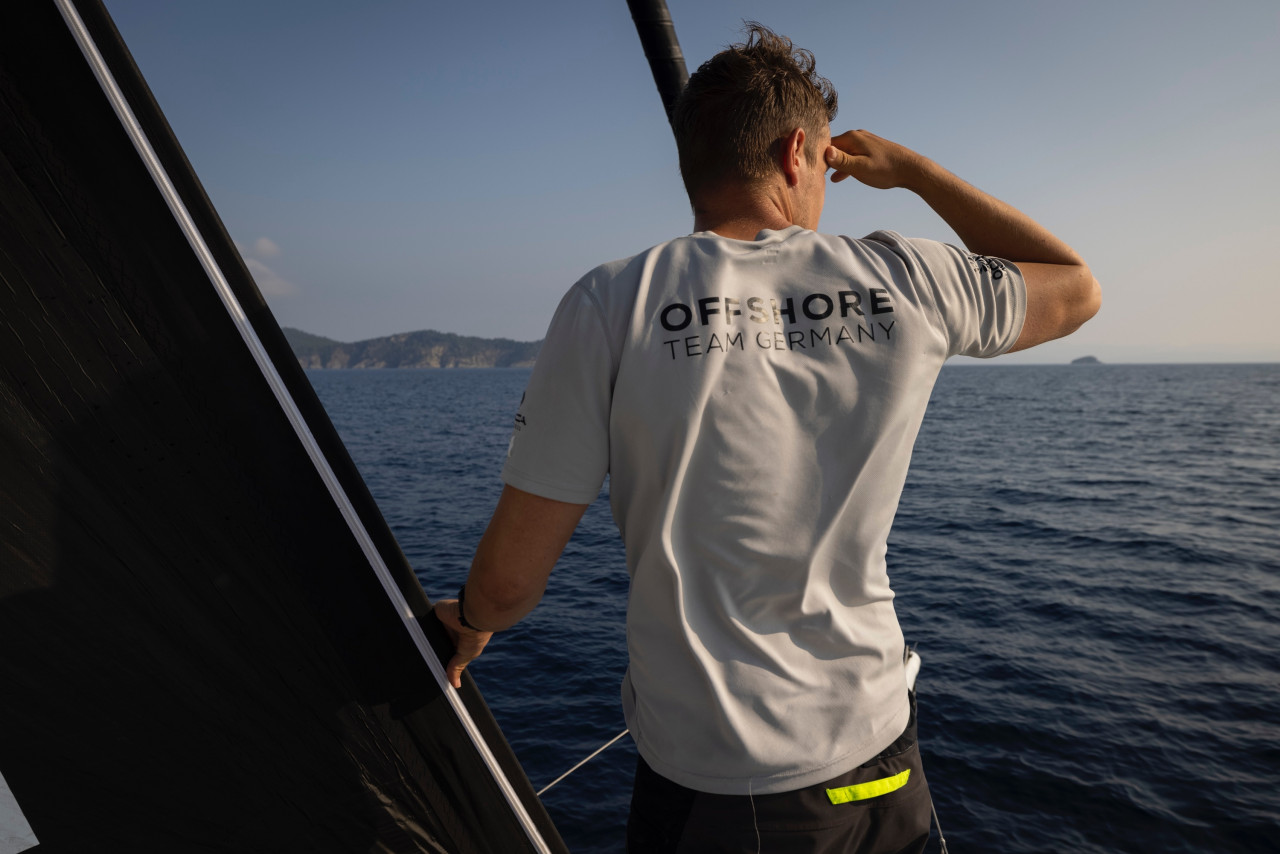 It’s a tense time for the sailors in The Ocean Race Europe as they close in on the finish line with final hurdles ahead.

Another 24 hours of light wind racing out on the Mediterranean on the third and final leg of The Ocean Race Europe has seen both the VO65 and IMOCA 60 fleets compress significantly as they push towards the finish line in Genova, Italy.

There has been compression in the five boat IMOCA 60 class with the trailing group of four foilers – 11th Hour Racing Team, LinkedOut, Bureau Vallée 3, CORUM L’Épargne – all starting to make better progress in new breeze and eating considerably into the leg-long lead established by the non-foiling Offshore Team Germany skippered by Robert Stanjek.

At 0000 UTC / 0200 this morning Stanjek and his crew – navigator Benjamin Dutreux, Annie Lush, Phillip Kasüske, and their onboard reporter, Felix Diemer – were 97nm/180km ahead of the pack.

This afternoon at 1300 UTC/1500 CEST that lead had nearly been halved, to 58nm/107km as the American-flagged 11th Hour Racing Team – made up of skipper Charlie Enright, past winners of The Ocean Race Pascal Bidégorry and Simon Fisher, Swiss round the world sailor Justine Mettraux, and OBR Amory Ross – leads a charge from the foilers in new breeze that has seen the yachts accelerate to consistent double-digit speeds for the first time in 48 hours.

“We’re trying to push hard for sure,” said Stanjek from on board the German boat. “But it's just very tricky on this coastline. Overall, I'm very happy with the sailing on a big lead over the rest of the fleet. We just have to sail our race and bring it home safe. But we have to stay focussed – it’s not a given.”

“Well, we're sailing these ocean-going machines inside the Mediterranean Sea, so it's very complicated,”said 11th Hour Racing Team’s Charlie Enright. “There's not a lot of wind and they don't go well in not a lot of wind. So you need to squeeze every ounce of performance out of them or you may never get started again if you stop. And we've done more manoeuvres in this leg probably than we have in the rest of the race combined already. So it's really tricky. And you got to stay on your game.”

There’s more of that to come, with another night of light winds and calm areas forecast before the IMOCA fleet finds its way to Genova on Thursday.

But further ahead, the seven VO65s continue to make the best of light to moderate conditions with the entire fleet of identical one-design yachts now within 100 nautical miles (nm) / 185 kilometres (km) of Genova.

Sailing Team Poland VO65 was still in front on Wednesday afternoon, albeit with a dramatically reduced lead over their nearest rivals, second placed Team Childhood I (NED) and Mirpuri Foundation racing Team (POR) in third.

The Polish-flagged yacht skippered by Dutch serial around-the-world racer Bouwe Bekking has led the VO65 class for the majority of this third leg from Alicante, Spain and at one point was 27nm/50km ahead of the pack. Since yesterday that advantage has been pegged back to under five nautical miles / nine kilometres.

With under 60nm/111km still to race to Genova, just 26nm/48km separated the VO65 leader Sailing Team Poland from seventh placed The Austrian Ocean Race Project (AUT). The Polish team’s nearest rivals – Childhood I skippered by Simeon Tienpont (NED), and the Yoann Richomme (FRA)-skippered Mirpuri Foundation Ocean Racing – are respectively four and six nautical miles behind and ready to pounce on any mistake. But with the chances high of a breeze shutdown tonight on the approach to Genova, at this stage none of the chasing fleet can be ruled out of a leg three podium position.

Latest estimates predict that the earliest arrivals in Genova would be near midnight tonight, but there is significant uncertainty in that ETA. If the wind holds as it is, the leading VO65s could arrive over two hours earlier. But if the wind dies out as forecast, the boats could be drifting, becalmed, within just miles of the finishing line well into the morning hours.

There will be live coverage of the finishes in Genoa on The Ocean Race YouTube and Facebook platforms as well as www.theoceanrace.com

You can follow the progress of the fleets on the race tracker and through updates at www.theoceanrace.com and www.twitter.com/theoceanrace