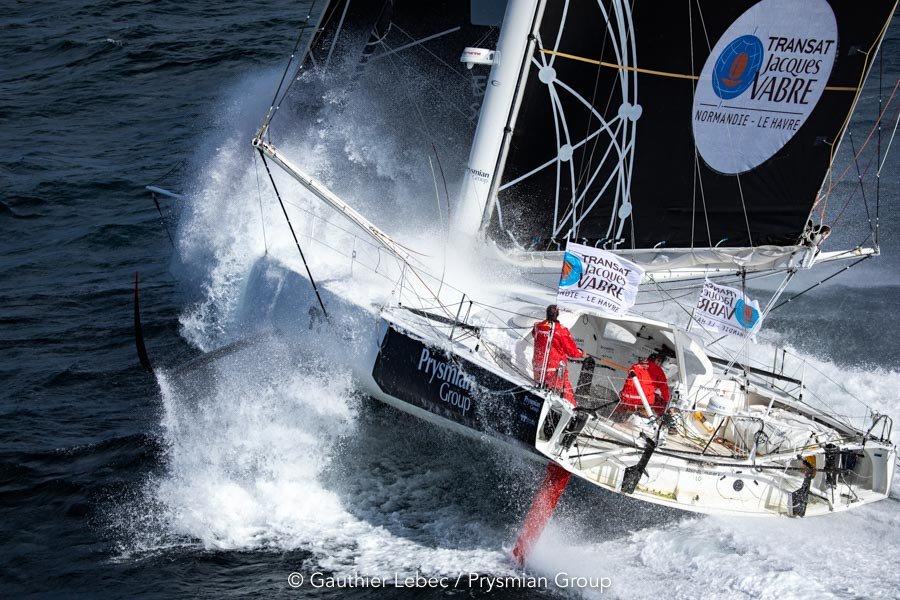 With the start of the Transat Jacques Vabre Normandie Le Havre fast approaching, Giancarlo Pedote and Martin Le Pape have arrived on the port of Le Havre yesterday to spend the next days before setting sail for Fort-de-France on 7 November 2021.

The duo on Prysmian Group is completing its final preparations on a purely technical level, as well as on a scientific level, the team having agreed to contribute to a project coordinated by Météo France for releasing weather buoys within the context of the European E-Surfmar programme.
The countdown is on. In less than ten days, the fleet participating in the 15th edition of the Transat Jacques Vabre Normandie Le Havre will set sail across the Atlantic.

“We’ve managed to make the most of the time we’ve had together to raise our game. Martin has adapted to the boat very quickly. We’ve managed to deal with the tasks efficiently and we’ve found an interesting way of operating in the process. He concentrates on the navigation and the routing, whilst I focus on the various on-board systems and manœuvres. During the training sessions in Port-la-Forêt, where we were pitted against our adversaries, we noticed that we had some fairly quick phases and that we were capable in certain situations or on certain points of sail of keeping pace with the new foilers. That’s given us a confidence boost and is an indication of how hard we’ve been working, even though we’re obviously not in the same league as the latest additions to the class. Our asset today has to be the reliability of our boat and that’s key, because our primary goal is to make it to the other side. Racking up the miles is always invaluable”, points out the Italian sailor.

A transatlantic passage with a scientific vocation

Completing the race and doing the best they can with the weapons at their disposal will naturally be the main objectives for Giancarlo Pedote and Martin Le Pape, though the pair are also one of the seven teams who have agreed to contribute to a project coordinated by Météo France to release weather buoys within the context of the European E-Surfmar programme. One of the main challenges of the programme is to permanently maintain the 150 buoys operating in the North Atlantic and the Arctic. The aim of this project? To improve on the quality of weather forecasts. The delivery of these buoys is scheduled for 3 November in the Coffee Route’s race village. The latter will then be released during the race at every 1° of latitude, between 10° and 16° North.