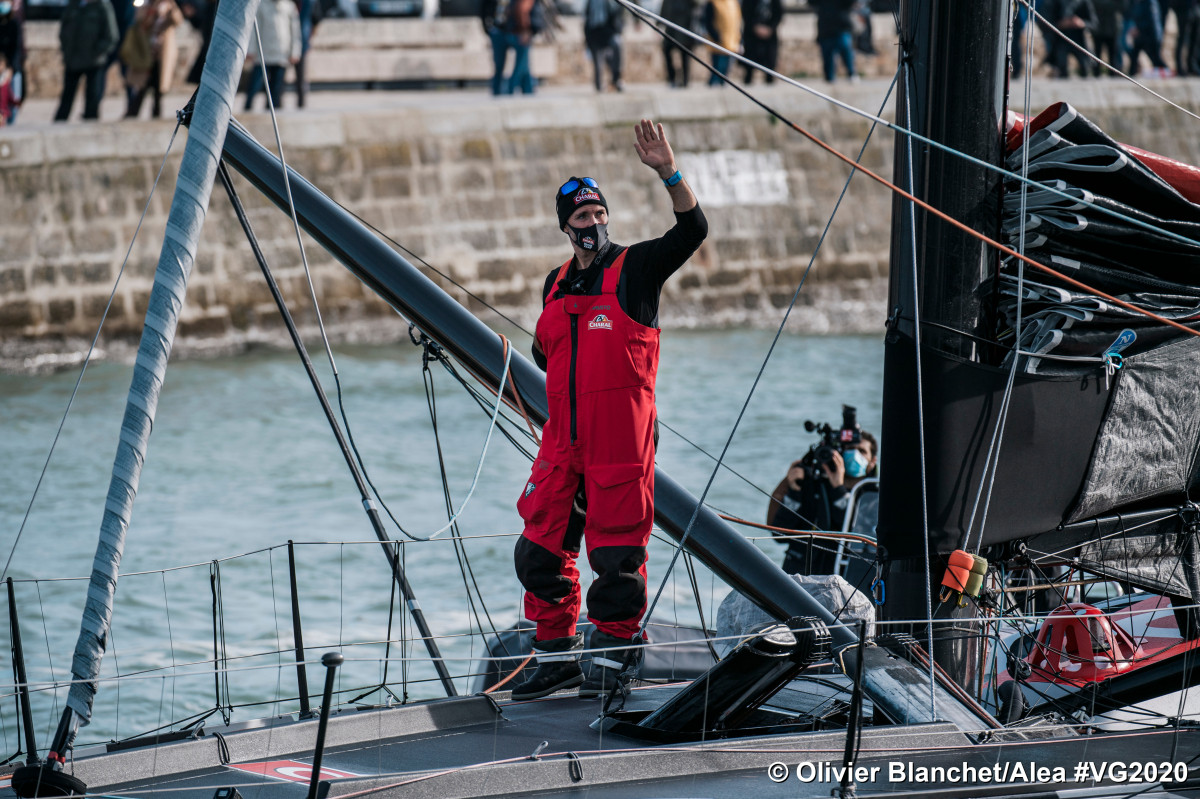 While the race continues to the Doldrums, with Alex Thomson on HUGO BOSS still leading the fleet, the focus today is back on Les Sables d’Olonne where pre-race favourite Jérémie Beyou will re-start on his repaired flying machine Charal.

The 44-year-old Frenchman from Côtes d'Armor, could easily have decided to throw in the towel after having to turn back when his boat was battered in the first frontal system of the race, but he has concluded that this Vendée Globe is not over for him.

Jérémie Beyou’s shore team has been working around the clock to get Charal back in one piece while their skipper has been self-isolating again and trying to come to terms with the psychological challenge that lies ahead.

“We will see what happens back on the sea,” he said yesterday when announcing his decision. “I really prefer to have no expectations, I don't want to set any goals. I don't know what we will discover. So we will see.”

His determination to complete his circumnavigation has impressed amateur sailors around the world and his fellow competitors, among them Boris Herrmann, the skipper of SeaExplorer-Yacht Club de Monaco, who summed up his feeling in this text message: “The Vendée Globe seems to be more than everything (else) a test of stamina, resilience and persistence. Love Jérémie’s courage. Must be so hard…so, so, so hard. After all they have done, you cannot imagine what they went through to prepare. Deep existential experience. Hope he will talk about it a bit to the outside world.”

Someone else who has been watching this drama unfold is Mike Golding, the British veteran of four Vendée Globe campaigns who finished the race in third place in 2008-09. Golding knows exactly what it feels like to re-start long after the fleet has departed and with all hope of winning gone.

In his first Vendee Globe in 2000-01, his Team Group 4 dismasted just seven hours after the start. But Golding resolved to continue and set sail again with a new rig and some new sails seven days later, eventually finishing seventh.

Golding applauds Beyou’s resolve to complete the course on his fourth attempt at this race (he finished third last time out). He told the IMOCA website: “It is the right choice for all sorts of reasons. It brings closure. If you walk away from it, you’ll never close the book on it – it’s a Vendée gone."

“Even though Jérémie is in the envious position of having done multiple Vendée campaigns, you don’t want to squander those opportunities. He’s got a great boat, a great sponsor, a great team – they’ve all worked very hard. To some extent, if you don’t do for itself, you are doing for everyone whose put you there.”

Golding believes Beyou’s story will become an intrinsic part of this race, much as his own adventure did 20 years ago when the Briton endured one of the scariest moment of his career when climbing the rig at Possession Island in the Roaring Forties.

“He’s still got a story to tell,” explained Golding. “He has still got people who are following him and want to see him and they will applaud him all the more for getting back out there and getting back on the bike, rather than just recoiling and saying ‘Oh no, I can’t win so I’m not going to do it.’

“I think it’s the right thing for him to do, for himself and for everyone else, I am sure. And he’ll make a good story in a Vendée Globe that’s got a lot of interesting stories, but he’ll be one of the stories of this race by doing this.”

Even though Beyou will be 3,000 miles behind the leading boats, Golding says he can still aim for the outright solo monohull record, that currently stands at 74 days and is held by the 2016/17 race winner Armel le C’leach. And Beyou could enjoy a fast start to that attempt with the meteorological situation in the north Atlantic currently favourable enough for a Jules Verne record attempt to start by the Gitana crew tomorrow.

Golding kept himself going by never conceding that he might even still win the race – a dream he nursed until Michel Desjoyeaux actually crossed the finish line, 17 days ahead of him. “I’m quite good at this, no matter how far I have fallen back in races I’ve seldom given up in my head. There is always a way; there is always a possibility and even in that race, when Desjoyeaux finished, I remember feeling very deflated because, even though I was still a long way back, I still imagined the miracle that I could get through.”

In the meantime Golding says Beyou will start to recapture his enthusiasm once he begins catching the backmarkers and ticking them off as he climbs up the rankings.

At the front of the fleet 900 miles north-northeast of Recife, Thomas Ruyant on LinkedOut has been showing excellent speed as he has narrowed the deficit on Thomson to just over 100 miles. Ruyant is now in second place, 107 miles behind Thomson, with Jean Le Cam on Yes We Cam! in third place just under 130 miles behind the lead.

Catching Le Cam in the fast foiling conditions is Charlie Dalin whose APIVIA is just over 20 miles behind him. But the squalls and holes of the Doldrums are not far away and Le Cam will be looking to hold position until they enter the transition zone.

23.01Log from Sam Davies: Cape Horn cond…Hello, I’m writing this from my bunk whe…22.012021 Two-Boat Racing Schedule Unvei…NEWPORT, Rhode Island (January 21, 2021)…22.01Casiraghi: Boris will push hard to …One of the most interesting and impressi…18.01Log from Sam Davies: 55 degrees Sou…Ok so I can confirm true Southern Ocean …18.01Servane Escoffier: "We can’t wait t…You don’t hear a lot about the home fron…12.01Yannick Bestaven's disappointmentJust a few days ago, Yannick Bestaven wa…
All news and videos
News