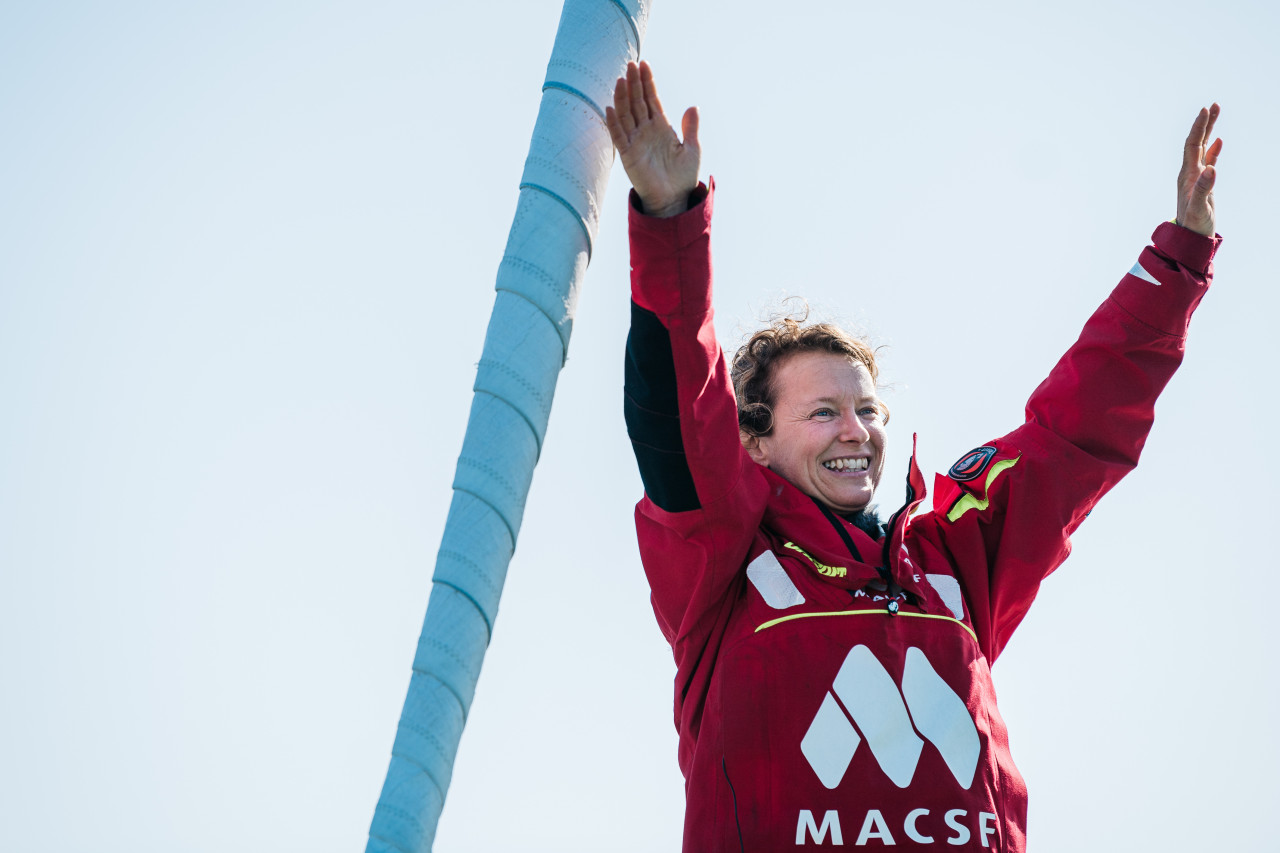 Isabelle Joschke who was forced out of the Vendée Globe on January 9th due to a keel ram failure on her IMOCA 60 has completed her round the world passage today out of the race when she sailed back into Les Sables d’Olonne today 107 days 21 hours after the race start on November 8th.

Until she was forced to abandon her Vendée Globe Joschke was sailing a great race, comfortably inside the top ten and seemingly with the potential to climb higher and higher up the rankings.

To finish in the top 10 was the original sporting goal for Isabelle Joschke who joined the IMOCA class in 2017 and she was well within that goal when she was forced to retire.

Answering the question ‘what might prevent you from reaching your goal?’ in a pre-start interview she responded: "not sailing at my own pace, chasing the pace of others and so making mistakes".

And it was with that belief at the front of her mind that Joschke started her first Vendée Globe and so she starts very prudently and trying to avoid the worst of the first front she makes multiple tacks and loses places, coming down the Atlantic in the last third of the fleet.

"My prudence cost me dearly" she admitted on November 17th. "But now I'm giving it my everything and I'm on the lookout for any opportunity to get back into the game.”

After that period when she was clearly torn between performance and safety, accepting this difficult compromise as best she can, she soon starts to press harder and harder, releasing the hard-bitten racer in herself.  And in the South Atlantic high pressure she sails smartly and gets herself back in touch with the leading pack to be 12th at the Cape of Good Hope.

Her first time in the Southern Ocean is a real voyage of self-discovery. Toughest of all moments mentally was experiencing the rescue of Kevin Escoffier from his liferaft after his PRB – a boat very similar to her MACSF – broke in two. Project manager Alain Gautier revealed that they came close to calling Joschke to stop into Cape Town because of their concerns.

But Joschke gradually increased her attack and became more comfortable to push herself and her boat hard. Despite her suffering with the cold in the south she impressed race watchers with her smooth trajectories and high average speeds. But on 3rd January just 48 hours before rounding Cape Horn for her first time, she suffers a failure of her keel ram. Employing an emergency ram to centre the keel she races on with her keel fixed in the middle. But five days later in the middle of a big depression east of Argentina the system fails and she is left with her keel swinging in its axis. She abandons immediately to be helped with the safest routing out of the system. It takes her 16 days of careful sailing at reduced speeds to reach Salvador de Bahia, Brasil. After her technical stopover of about ten days she set sail again on February 5th agreeing to sail in company with her friend and rival Sam Davies to return to Les Sables d’Olonne.

Joschke, who came to sailing quite later, won the first leg of the MiniTransat in 2007, is blessed with an extraordinary strength of character and human intelligence. "I would like to be proud of the way I endure everything I encounter. I know it won't be easy," she said before the start.

Finishing with her head held high and deeply proud of her achievement today, ranked on the final classifications or not she has lived up to that personal and today completes a remarkable adventure which will serve her well for the future.