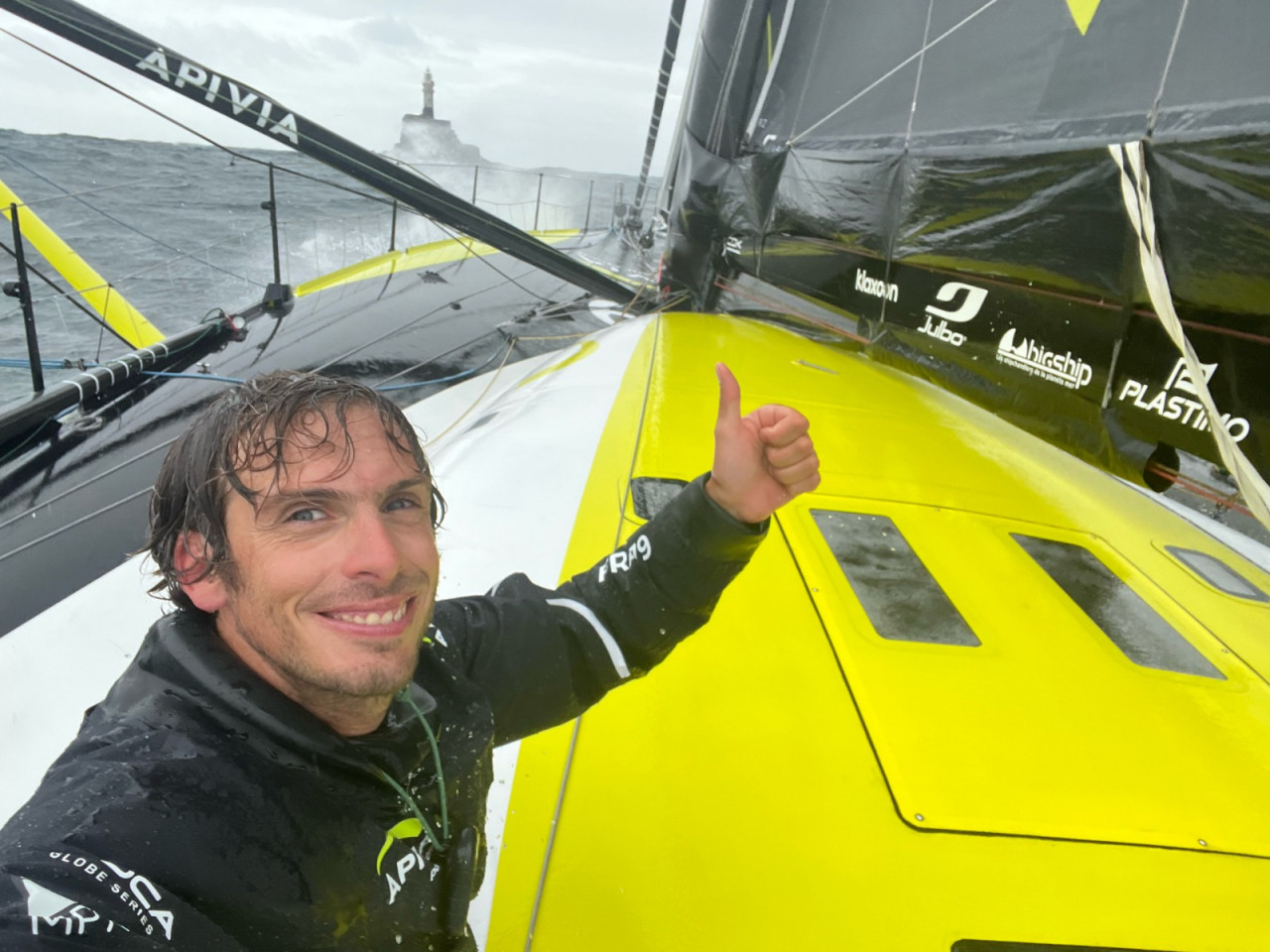 After two days at sea in the Guyader Bermudes 1000 Race, the IMOCA fleet is now heading south-southwest on a starboard reach towards the Gallimard Waypoint situated about 250 nautical miles west-northwest of Cape Finisterre.

Not for the first time in recent races, the leader, who has dominated from the start off Brest on Sunday, is the APIVIA skipper Charlie Dalin. The Frenchman from Le Havre has been fighting hard to stay ahead of his old rivals and fellow countrymen Jérémie Beyou on Charal and Thomas Ruyant on LinkedOut.

The 38-year-old Dalin was in great from when contacted by the IMOCA Class today, joking that the “usual suspects” were back in front of this early season 1,200-mile sprint race – a reference to the tight competition he is enjoying with Beyou and Ruyant.

“With Thomas and Jérémie, it’s like the ‘usual suspects’, I would say,”he said from the cockpit of APIVIA, as she surfed south-southwest, at a position about 225 miles north-northwest of the Gallimard turning mark. “We’ve been battling together since the Vendée Arctique in 2020; it was a three-way battle in that race, the same in the Transat Jacques Vabre last year and here we go again this year."

“The three of us have competitive boats so we know them well, it being the fourth year that we are sailing these boats for each of us,” he added. “We have boats that are performing well allied with our experience sailing on them, so it makes sense.”

One of the hallmarks of Dalin’s dominance in the IMOCA fleet has been his excellent race starts and this race has been no exception, as he dominated from the beginning in light airs on Sunday. “I am happy with my start because it’s important to have clear air at the beginning in order to be in the leading group at the first waypoint. Afterwards we sailed in new pressure which did not really move towards us, so it was important to be where I was to extend the lead. In this new breeze we kept on extending and gaining into new pressure,” he explained.

Dalin said conditions deteriorated as he approached the Fastnet Rock close to the Irish coast in big breeze and rough seas. “It was pretty brutal arriving at the Fastnet. I saw close to 30 knots of wind and big gusts,” he said. “It was not very comfortable on board, but I kept pushing because I know it’s the only way to keep the lead and I tried to keep as much sail area as possible for the longest time.”

Behind APIVIA the fleet is spread over 250 miles of ocean. Beyou and Ruyant have dropped back but are now locked in a thrilling battle for second place, just a couple of miles apart and about 40 miles behind the leader. Then there is a gap of around another 40 miles to Louis Burton in Bureau Vallée in fourth place, who has posted some good video of his boat powered up in big breeze on the way to the Fastnet.

In fifth place, but very closely followed by Benjamin Dutreux on GUYOT Environment-Water Family and Isabelle Joschke on MACSF, is one of the standout performers of the race so far – Nicolas Lunven on Banque Populaire, the first non-foiling boat in the ranking. Lunven, who has taken up the role in place of Clarisse Crémer who is expecting a baby, had been holding fourth position throughout the early stages.

Another strong non-foiling performer has been the American/New Zealand skipper Conrad Colman who has produced an excellent showing so far on his return to the class, in tenth place on board Imagine, the former V and B-Mayenne. This display will no doubt help him in his search for a title sponsor as he aims for the next Vendée Globe.

Just ahead of Colman is the Italian skipper Giancarlo Pedote on his newly-modified Prysmian Group, a 2015 Verdier design that now has a re-modelled bow section. “The race is going pretty well for us – we made a great start,”said 46-year-old Pedote, who is originally from Florence. “And it was nice to stay in the front of the group for the first part, until the Fastnet. Then the boats with the big foils took advantage as we expected.”

Pedote is pleased with the way his yacht is performing. “I’m happy with my bow and with the work we did in the winter to make progress, to have a boat with more performance,” he said. “Everything is good on board and it is nice to race again in the Bermudes 1000.”

So far two skippers among the record 24 starters have dropped out. Weöres Szabolcs retired early on Szabi Racing and, today, Nicolas Troussel is heading back to the French coast with keel problems on board CORUM L’Épargne.