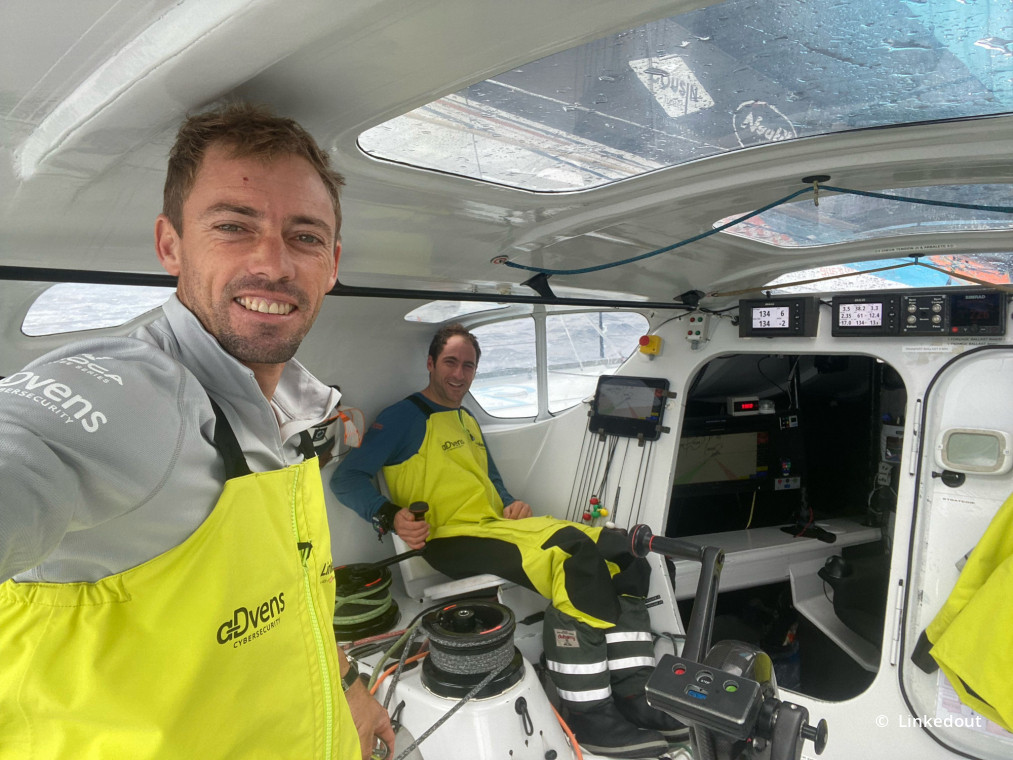 After the very slow early phases off the Brittany coast, the pace has quickened as the leaders rounded Cape Finisterre and then swept down the Portuguese coast, running before fresh northerly/northeasterly winds.

This morning the leader, LinkedOut co-skippered by Thomas Ruyant and Morgan Lagravière, is just 75 nautical miles north of Madeira, surfing downwind at about 12 knots in a moderate north-northeasterly breeze and with a mere 4,485 miles still to sail to the finish at Martinique.

Behind the blue and white IMOCA, the fleet is spread out over 500 miles on a northeast-southwest axis with the backmarker, EBAC, skippered by Antoine Cornic and Jean-Charles Luro, currently about 130 miles southwest of Cape Finisterre.

While the pace has quickened, the fleet has lost a second boat to a dismasting in the last couple of days with Simon Fisher and Justine Mettraux on 11th Hour Racing Team-Alaka’i having to retire into La Coruna on the northwest corner of Spain. The loss of their rig – a bitter blow after a strong start to the race – followed the earlier dismasting of Louis Burton’s Bureau Vallée.

This has already been a fascinating race as the fleet tackled a lottery of light airs and then took off, a notable early casualty being Nicolas Troussel and Sébastien Josse on CORUM L’Épargne who became marooned offshore and are now back in 11th place, nearly 230 miles behind the leader.

Up at the front, the next big decision is what to do about the Canaries after the leaders pass to windward of Madeira. Six hundred miles to the south of LinkedOut, the leading Ocean Fifty trimaran – Koesio skippered by Erwan Le Roux and Xavier Macaire and benefitting from onshore routing – is heading through the islands, east of Tenerife, while the chasing group seems to be keeping to the west.

Overall the gameplan for navigators is all about staying in the breeze which at the moment means keeping more to the east side of the course but trying hard not to fall into light patches. Much further down the track will come the decisive moment on when to start heading further west as the co-skippers target their crossing point of the Doldrums.

The battle at the front was being led for much of the last few days by Charlie Dalin and Paul Meilhat on APIVIA. But a move to the east and a couple of gybes back has seen them surrender the initiative to Ruyant and Lagravière and then also being overtaken by Jérémie Beyou and Christopher Pratt on Charal. The three front-running crews are within less than 20 miles of each other and it’s game-on between them as they look to stamp their authority on this race.

Beyou is relishing being back on the racecourse in the much-modified Charal and said, in a message from the boat today, that he and his co-skipper Pratt are working hard to stay in the breeze. “We are trying to stay in the wind zone, to progress downwind,” he said. “The strength of the wind is quite variable and remains quite random. It's kind of up to each of us to make fast progress.

You have to manoeuvre a lot, make a lot of adjustments and change sails. It's easier on port tack because of the direction of the waves. On starboard, the boat is much more complicated to move forward, so you really have to be on top of it, and then there are a lot of gybes, so it's a little bit of a sport each time.”

Beyou was a little coy about his plans as the recourse opens up in front of Charal with the rock fortress of Madeira and its wind shadow to deal with, then the Canaries and then the Cape Verde Islands. “The strategy is to move south and we are really playing the short-term,”he explained. “We have an idea of the long-term strategy, but we'll keep that to ourselves. Let’s say that all the options are open; we're starting to have a precise idea and yes, we're looking at the general situation and looking at the situation in the Doldrums. We can see that it's very tight and that there's a lot of uncertainty that will remain for a long time.”

The Charal skipper said the early stages in the calm patch off Brest was tough to deal with as he and Pratt teased every knot out of their foiler and he admitted that luck played a role in who got out when and in what order. “It was a bit hard, but we fought to get out of the ridge and managed to get out in the right pack,” he said. “But we saw, for example, what happened to Corum L’Épargne – those poor guys who were far behind. It makes you realise that there was a big element of random fortune which was quite painful for some. But since we got some wind, the boat has been moving fast and morale is good, so everything is fine.”

In the front half of the fleet, Britain’s Sam Davies and Frenchman Nicolas Lunven have been having an excellent race on their 2010-vintage IMOCA, Initiatives-Coeur, which is lying in fourth place, just over 40 miles behind LinkedOut and 20 miles ahead of the brand new 11th Hour Racing Team-Mālama, skippered by Charlie Enright and Pascal Bidégorry.

In a message from on board, the irrepressible Davies said she and Lunven were frustrated to lose a few miles in an unforecasted calm patch late on Thursday. “As the night fell the wind filled back in, more and more, until we had a bit too much for our spinnaker,”she reported. “As we need that sail for a lot of the race, we chose not to take any risks and so we changed to the A3 (gennaker) and at the same time it was time to gybe to head south.

“So now we are sending it fast,”she added, “there’s water cascading down the decks of Initiatives-Coeur and we are happy ‘hooning’ along under a starry night. We’re in a sandwich between Charal (now APIVIA) and 11th Hour 2 (Mālama), so we’re not sure to be able to hold their pace but we’re trying our best.”