LinkedOut is the pace-setter as a fascinating challenge unfolds 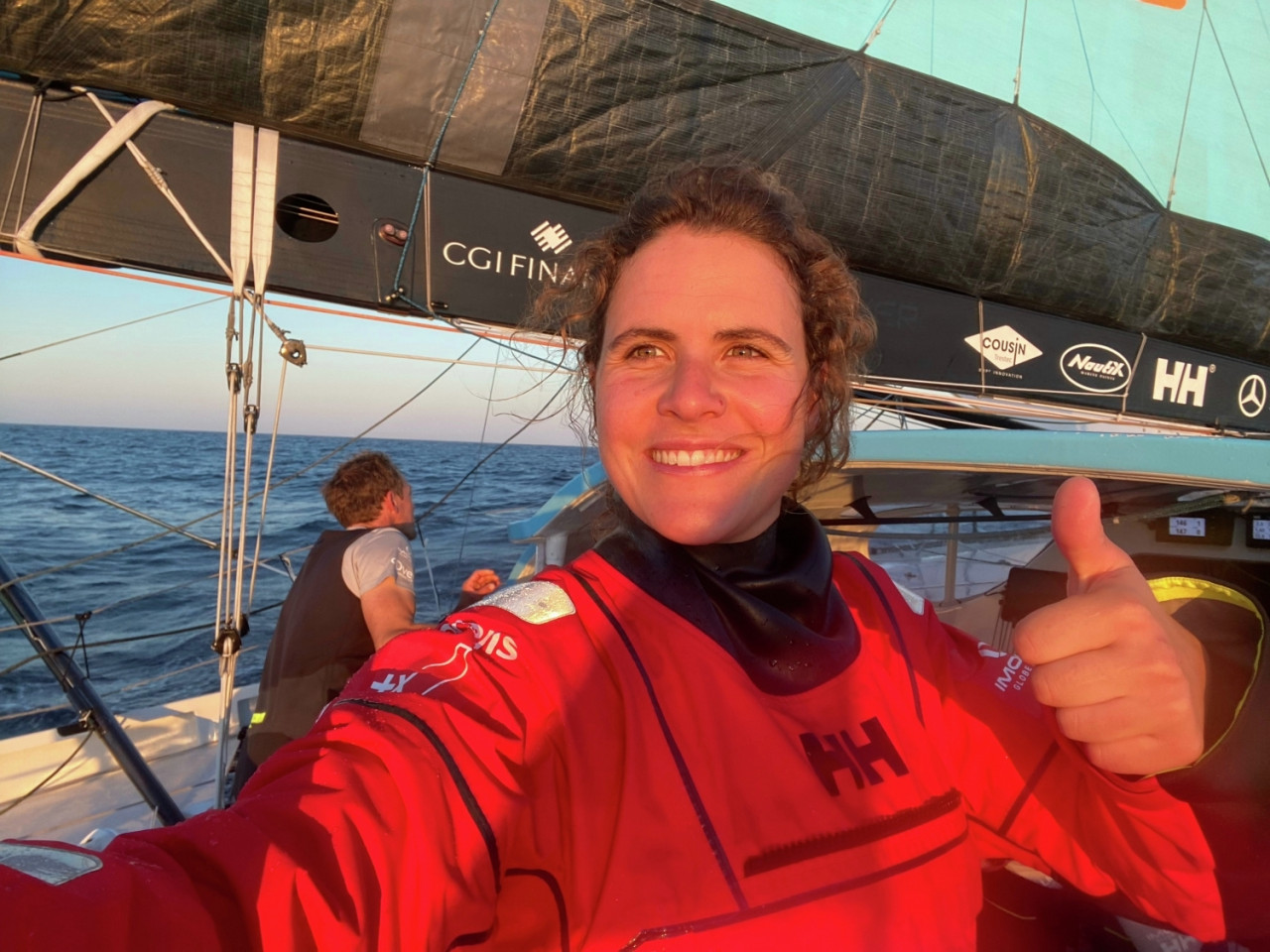 Leg two of The Ocean Race Europe is proving to be fascinating challenge for navigators and skippers in the IMOCA Class, as they transition from strong downwind to upwind conditions and then what is expected to be a lightwind finale.

This leg may be short at just under 600 miles, but it is complex and full of opportunities and potential pitfalls with coastlines ever-present, continuously varied tidal conditions and the breeze influenced by land.

After almost 24 hours at sea, we caught up with Clarisse Crémer on board LinkedOut, the leading IMOCA and the leading boat in the combined IMOCA and VO65 fleets.

At that stage the blue and white Guillaume Verdier-designed thoroughbred was tackling 35-knot headwinds, with wind against current, just a few miles off the Moroccan coast, north of Tangier.

Crémer explained that all five of the crew on board Thomas Ruyant’s flyer were required on deck to execute tacks as the boat continued eastwards under single-reefed main and J2 headsail.

“The swell is quite short but not with too big waves,” she said. “They are quite small but there is 30-35 knots of wind, so it is quite windy and the tacks are a bit difficult. We have to concentrate to make sure the boat doesn’t stop and go backwards during the tack, so we are all on deck to do them as fast as we can.”

Crémer added that once they have got through the Strait of Gibraltar, they will be in completely different conditions with flat water and light headwinds. She and her crewmates were wondering whether another re-start could happen before the final stages into Alicante.

“We know that anything can happen,”she said. “If you look at the weather for the next few days in the Med and close to Alicante, there might be a re-start like in leg one, so there is still a long way to go yet.”

Christian Dumard, the official weather consultant to the race organisers for The Ocean Race Europe, says the key after the Strait is to get the balance right between using the best of the favourable tide to the north but not getting too close to the Spanish coast where the wind will be very light.

Dumard says there will be light winds during Tuesday night and early Wednesday before the leading boats pick up a sea breeze for the final run into the finish.

“I think it will be a little different from leg one because the boats were still moving in leg one but the wind was lighter ahead of them and the system was moving with the fleet,”he explained. “In this case the wind is just going to get lighter for most of the competitors and then the sea breeze will fill in, so the boats will probably be more spread out when the wind dies. I’m not sure there will be a re-start – but there could be different options, with better options close to the coast or offshore.”

Dumard is expecting the navigators to get close to Cabo de Gata, east of the Spanish resort of Almeria, to benefit from wind effects off the land. “It’s quite light along the shore, but the wind is bending around Cabo de Gata,” he said. “So they will probably want to go quite close to the Spanish coast on Tuesday to get this left shift. Then the wind is bending to the right in the east and they will probably tack and go towards the east to get the next shift.”

All of this is not exactly what IMOCA’s were designed for, but the sailors and race fans around the world are loving the challenge of the inaugural staging of The Ocean Race Europe. Dumard says even 11th Hour Racing Team, skippered by Charlie Enright, could still be a potential winner. Enright’s crew are currently 35 miles off the pace after having re-started without their port-side foil which was damaged in a collision shortly after the start on Sunday.

“This course is a good challenge and the route for the first boat might not be the best one for the second ones because, for some of the wind effects, it depends on the timing,” said Dumard. “So we will see what happens with 11th Hour Racing Team which may have more favourable conditions from behind.”

Back on LinkedOut, Ruyant’s team has been relishing the competition as they hunt for their first victory in this race. To start with they enjoyed a boisterous run in big winds going south from Cascais, alongside the team on Bureau Vallée 3 skippered by Louis Burton.

“They were quite fast downwind and quite fast during the night. It seems it was a bit more difficult for them as soon as we started going upwind,” said Crémer. “But yeah, were were happy to have this tight competition with Bureau Vallée.”

She said they were also keeping a close eye on Robert Stanjek and his crew on Offshore Team Germany, the only boat in the IMOCA division with no foils, which could benefit in the light upwind conditions that will dominate the second half of this leg.

Stanjek and his crew have impressed their rivals with their consistently fast sailing and Crémer is well aware that they could be a real threat over the next 48 hours. “We keep a very close eye on this team because they sail very well and very fast,” she said of the white IMOCA then just over eight miles behind them.

“The weather conditions could be quite profitable for their boat – upwind is OK for them and light winds is very nice for them, so they could win this leg. So we are keeping a close eye on them but the competition is with every boat in this race,”she added.

Ruyant and his team, that also includes Morgan Lagravière, Quentin Ponroy and François Pernelle, are pushing hard for the top of the podium in Alicante, having set the pace almost continuously from the start in Cascais. When we suggested to Crémer that they were out there to win this leg, she laughed.

“Exactly!”she replied. “We need this and we want it…!”