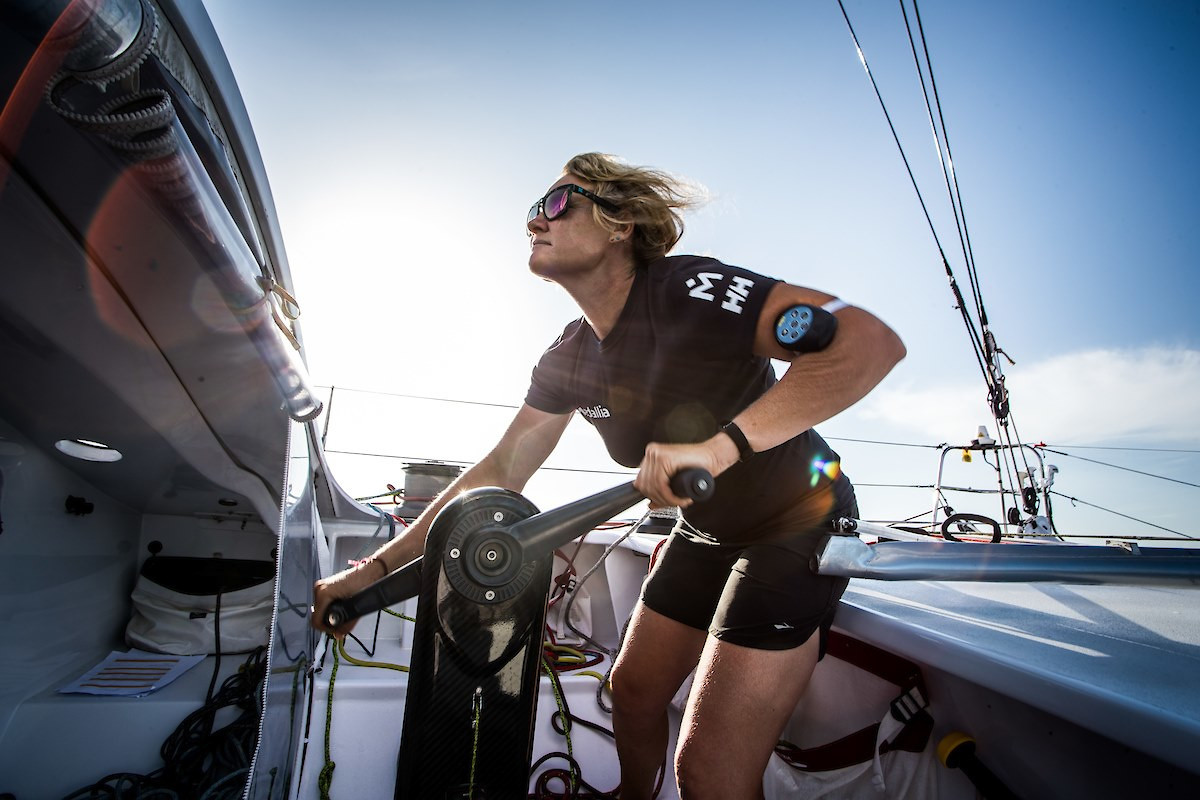 Medallia is heading south with a purposeful stride this evening and all is well.

Yesterday I took a deep breath and split tacks with my Spanish running mate of the last few days to gain some miles to the west. It ended up being quite a tense day. I set my big spinnaker (big bertha) first thing, and after a couple of hours had reached its max wind limit - way quicker than I was expecting. For pretty much the rest of the day I was in a quandary about taking the thing down again.

The average wind strength was hovering just half a not under my max limit. Sometimes more, sometimes less. It's excruciating to be teased like this. The big kite fulfills a couple of key roles, firstly giving me the sail area in lighter airs to keep moving, but secondly in the moderate breeze it allows me to head further downwind that the flatter furling sails, so though my speed may not be more with the extra sail area, my downwind course can be significantly better. I only intended to head West during the daylight hours yesterday and having the big kite up during those miles west was definitely allowing me to sail a better course. The boat was not overpowered by it..... it's always the getting it down that is a problem.

Eventually at 1600 I saw 25 knots and it was time to call time on big bertha and get her out of the sky. This was one of those manoeuvres that could go so badly wrong and it is wrestling this sail in wind when I feel my most ineffectual as a human being. The forces acting on the spinnaker are immense, and it wants to fly, or to fall in the water and go under the boat - either way one 73kg woman is not going to stand in this sails way if it wants to break free. These drops are about having a plan, good preparation and making sure you understand everything that could go wrong. I spent 15 minutes setting it all up. Snatch blocks on the foredeck to take my snuffer lines to the winch, tack lines ready to ease just the right amount, pilot steering to as deep a heading as I dared. my heart rate was already up before I started the drop then off we went. Bertha came down with only a minor tussle, though having worked me to the bone. Maybe the anticipation was worse than the reality but It's the most wind I have ever taken that sail down in alone, and it could have gone so badly wrong.

It took me 1.5 hours from end to end to get bertha down, replace it with the down wind code zero (no name for this one... not yet) bag the spinnaker and get it tied into the stack on the back of the boat. I had put on my waterproof bottoms to protect my legs is something did go wrong and I got dragged across the deck and the extra layer made it hot work. I am doing everything steadily, rushing nothing. A mistake could loose me so much more than the couple of miles I would gain trying to do everything in half the time. Even with the care I lost a sheet down the back of the boat, which wrapped around a rudder and took me 15 minutes to unwind. This is a favourite thing on my boat, an sheet that is given the opportunity makes a beeline straight under the boat for the rudders. I definitely aspire to have flip up rudders one day, at least then I would only have half the problem.

Now I have gybed back and am flying south through the night towards the equator. Ahead of me according to the forecast should be about 1000 miles of sailing in a straight line... I will believe it when it happens but am excited to feel like we are finally eating up some ocean.

All being well tomorrow will be a great sailing day with very little human interaction required, which means a bow to stern boat check and some time to get messy with epoxy trying to rebuild my engine water cooling sub tank.