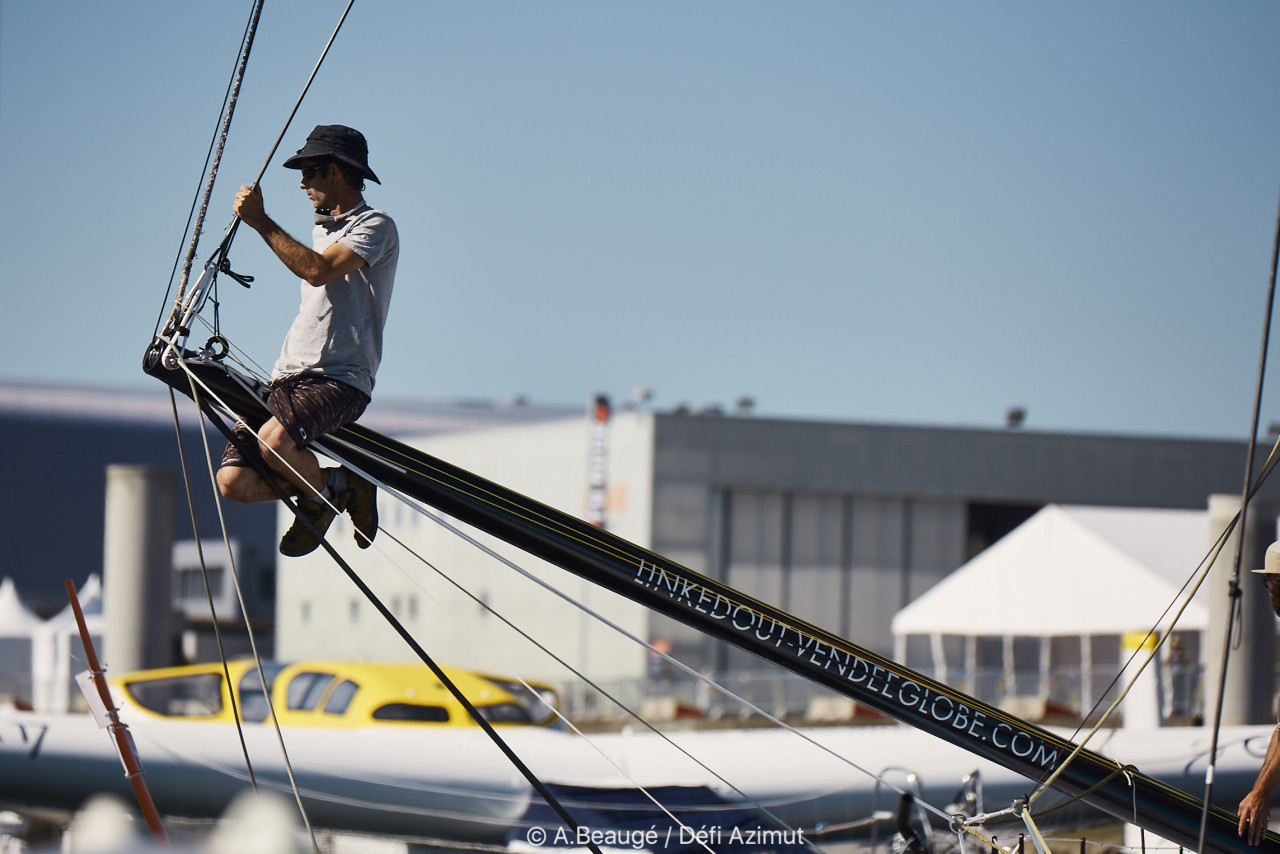 The centre of the solo and short-handed offshore racing world is most definitely La Base marina on the waterfront in Lorient on the French Brittany coast for the next few days, as the IMOCA Class puts on its showcase regatta for sponsors and partners.

The old World War II German base with its massive concrete submarine pens is a hive of activity as 14 IMOCA teams get together for the unique three-part Défi Azimut-Lorient Agglomoration celebration of the world’s most radical and fastest offshore monohulls.

With spectacular speed runs on Wednesday to get things underway – (assuming that is, that the weather plays ball) – there is then a two-handed 48-hour offshore race starting on Thursday, before the event ends with a race around the nearby Isle de Groix on Sunday.

Every year the Défi Azimut takes place in the build up to the class’s big race in the autumn. Last year it was the Vendée Globe solo round the world race – this time it is the two-handed Transat Jacques Vabre that sets sail from Le Havre on November 7 bound for Martinique.

Among those most looking forward to that test is Romain Attanasio, who was dockside at La Base this morning after bringing his new boat Fortinet-Best Western – the former Malizia II – into the marina. Attanasio says the Défi Azimut is a great chance to share the excitement of his new foiling racing machine with his four sponsors.

“We are making a big thing for our sponsors this week,”Attanasio said. “We are probably full tomorrow and on Sunday for the round the island race. I have all the bosses of my different sponsors here, so it is important that they meet everybody – it is a great opportunity to do something exciting.”

Down on the pontoons the IMOCA’s share space with the Ultim trimarans that are permanently based here. Opposite the giant Sodebo Ultim3, Louis Burton and Davy Beaudart’s Bureau Vallée 3, with its mean-looking scow bow, sits alongside Manuel Cousin and Alexia Barrier’s Groupe Sétin-4MyPlanet.

Then further along the pontoon, opposite the giant trimarans Gitana and Banque Populaire, are to be found the unusual lines of Juan Kouyoumdjian’s CORUM L’Epargne, entered in the Transat Jacques Vabre by Nicolas Troussel and Sébastien Josse, and then Sam Davies’s Initiatives-Coeur and Isabelle Joschke’s MACSF.

Chatting with his team next to his boat, the CORUM L’Epargne co-skipper Josse said this year’s Défi Azimut was more important than usual because Covid-19 restrictions had prevented the team from doing much sponsor liaison in the build-up to the Vendée Globe.

“With the Corona virus before the Vendée Globe it was really tricky to bring clients on board, so it is the first time that people from CORUM L'Epargne can come on board and see the boat and we can share the boat using this week,”he said.

Josse added that the week is also an important warm-up for the Transat Jacques Vabre. “We haven’t made so many starts with this boat, especially with a short-handed crew, so it is always good to race against each other. And having 15 boats sailing together does not happen very often,” he said.

The chat on the dockside is all about the imminent arrival of the two 11th Hour Racing Team IMOCAs which are on their way to Lorient from Concarneau. This week will see the racing debut of the brand new 11th Hour IMOCA 60, the first in the Class built especially for fully-crewed racing in The Ocean Race.

Irishman Damian Foxall, the sustainability programme manager for the team, was part of the advance party getting ready for the boats’ arrival. “For us it is a big moment because we have just launched the new boat and we are currently on a two-boat programme, having used Alex Thomson’s old boat to prep and spec our new boat,” he explained. “And both boats are getting ready for a double-handed transatlantic race so this is a key period.”

Like their rivals, 11th Hour Racing Team will be using this event to showcase their programme to their sponsors. “We’ve been working up to this for a couple of years and we have sponsors here and hopefully they will get out on the boats,”added Foxall.

Over on the most seaward of the pontoons, in front of submarine pen “K3,” are to be found Campagnie du Lit-Jiliti skippered by Clément Giraud and Erik Nigon and then Attanasio’s new boat, then La Mie Câline-Artisan Artipôle skippered by Arnaud Boissières and Rodophe Sépho, Groupe APICIL skippered by Damien Seguin and Benjamin Dutreux and finally LinkedOut raced by Thomas Ruyant and Morgan Lagraviere.

Marcus Hutchinson, team manager of the LinkedOut syndicate, said this week is the last “check-in” for the skippers and teams before the TJV. “It is also a really important time for the commercial model for the IMOCA Class because a lot of partners, sponsors and prospective commercial partners are coming to sail on the boats, which is a vital part of keeping the whole IMOCA machine going for future events,” he said.