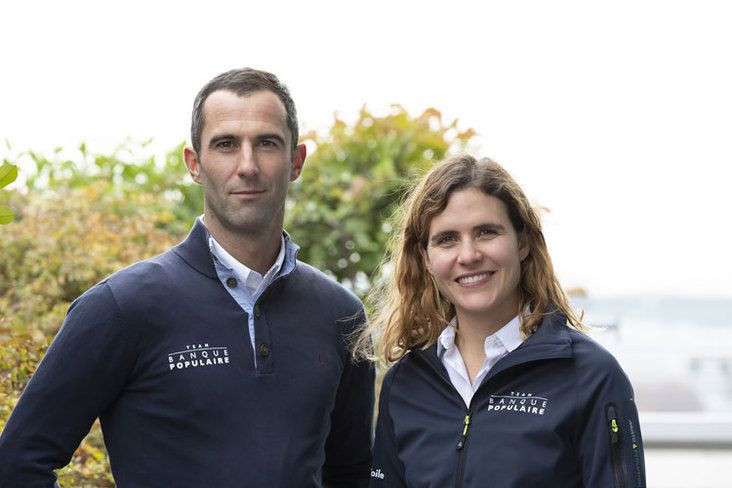 On Tuesday 22nd January, Banque Populaire announced its return to the IMOCA circuit by handing over the helm of Paul Meilhat’s former SMA to the young skipper, Clarisse Crémer with the 2020 Vendée Globe in mind. To get used to her 60-foot boat, Clarisse will be able to count on advice from Armel Le Cléac’h with whom she will compete in the 2019 Transat Jacques Vabre.

A few days earlier, Yannick Bestaven made the purchase of Morgan Lagravière’s former Safran official. The boat will now display the colours of Maître CoQ. In these exciting times, the IMOCA also announced the return of a race for the 2019 calendar – the Bermuda 1000, a 2000-mile solo race which will set sail on 8th May from Douarnenez in Brittany.

The rumours have been doing the rounds for a while, so Banque Populaire’s return to the IMOCA circuit was not really a mystery. We still needed to find out who would be taking the helm of Paul Meilhat’s former SMA. The lucky skipper to be chosen is Clarisse Crémer, 2nd in the 2016 Mini Transat. She will be getting her hands on Banque Populaire X in July after the conclusion of the Solitaire URGO - Le Figaro in which she is racing with a different partner. For her major new challenge, the young woman will be able to rely on the expertise of the Banque Populaire team and the support of Armel Le Cléac’h, the last winner of the Vendée Globe, with whom she will at the end of the year be competing in the Transat Jacques Vabre. “My role in Clarisse’s Vendée Globe project is to offer her some of my experience of the race after sailing for ten years on IMOCAs. Your first Vendée Globe is always a moment when you feel apprehension of the unknown. I shall be trying to give her as much help as possible to allow her to line up at the start of this race in the best condition,” explainedArmel.

A determined competitor and excellent communicator, Clarisse Crémer is well aware of the enormity of the task ahead and realises how lucky she is to be so well supported: “This project is both full of excitement and a certain amount of apprehension, as there are so many unknown factors.I have never been in such a big team as this and have a lot to learn. I am tackling this project aware of where I am. It is also going to be part of the challenge to go through an accelerated learning process. I told myself that by joining the Banque Populaire team, I was at the best school with the best people around me that I could find to tackle an adventure like this. I will do my best to live up to that and keep up the pace set by Armel when we are on board. I am very pleased to be able to learn alongside him, but I feel slightly intimidated too.”

Yannick Bestaven moves up a gear

Yannick Bestaven is another happy sailor, as he will have the privilege of sailing on a foiler, Morgan Lagravière’s former Safran, a VPLP-Verdier designed boat launched in 2015. The skipper from La Rochelle is moving up a gear and will be able to compete in races in the IMOCA Globe Series while aiming much higher. “I’m really pleased, as after a learning phase, I am going to have the opportunity of aiming for the podium on a boat that performs well,” declared a pleased Bestaven.Meanwhile, he is going to have to get used to his new boat now in the colours of Maître CoQ, which is highly technical, fast but demanding. With this in mind, the skipper from La Rochelle will be saving a lot of precious time, as he will have the support of Kaïros, the company owned by Roland Jourdain, who previously owned this IMOCA. This will mean a lot of time will be saved for Yannick. “The programme ahead is packed with the final adjustments and a delivery trip soon to Cascais inPortugal for some busy training sessions over the next two months,” he added. “The foiling IMOCAs are very complicated,” stressed Roland Jourdain. “There are a lot of details to get to know and it is always interesting to rely on those who know about these things.”

The former Maître CoQ (a Farr design from 2006) has been purchased by Clément Giraud, a 38-year old, who has previously clocked up experience in the mini circuit. He is due to relaunch the boat some time in February and will shortly reveal the name of his partner.

This solo IMOCA race, the BERMUDA 1000, will be on the 2019 Globe Series calendar this year with a coefficient of 2. The race offers a 2000-mile race course starting from Douarnenez, going via the Fastnet Rock and then the Azores before heading for a major port in Brittany, which will be announced shortly by the organiser. So far, around fifteen skippers have expressed their interest. This race will be the first major solo test for some like the Belgian skipper, Denis Van Weynbergh, the Italian, Giancarlo Pedote and the skipper from Saint-Malo Maxime Sorel. For others, like Samantha Davies, Yannick Bestaven, Manu Cousin and Damien Seguin, it will be an opportunity to clock up the miles and to fine tune their boats. We should add that after his fine performance in the Route du Rhum, Destination Guadeloupe, Boris Herrmann, if he wins, may take the lead in the IMOCA Globe Series World Championship. For Gwen Chapalain, the organiser of the BERMUDA 1000, "This race will be a special addition to the Guyader Grand Prix event in Douarnenez, which will be celebrating its twentieth anniversary this year. For fifteen years now, Douarnenez has been host to the IMOCAs. This race will be a fantastic event in the spring illustrating our continued interest in and close links with the IMOCA class.”