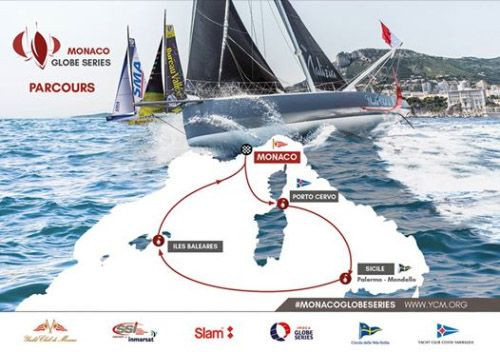 On Sunday 3rd June, nine double-handed crews will set sail at the start of the Monaco Globe Series, a brand new 1300-mile race in the Mediterranean

On Sunday 3rd June, nine double-handed crews will set sail at the start of the Monaco Globe Series, a brand new 1300-mile race in the Mediterranean. In this magnificent setting, the battle looks like being exciting and instructive with a lot to play for. This new event will be the first leg of the Globe Series, the new IMOCA world championship for the 2018-2020 period.

It’s been six years since the skippers in the IMOCA class last took part in a race in the Mediterranean with the 2012 Europa Warm Up. With the Monaco Globe Series, they will be competing in a non-stop double-handed for the first time in these fantastic waters, which often prove to be complicated. After two days of exhibition races on Friday 1st June and Saturday 2nd June, the duos will set sail from Monaco at the start of the 1300 mile race at 1p.m. precisely on Sunday 3rd June. The fleet will sail along the Western coast of Corsica before entering the Strait of Bonifacio between Corsica and Sardinia to head for Sicily. The fleet will then point their bows towards the Balearics before sailing back to the Principality of Monaco. “On one of the world’s most beautiful seas, the IMOCAskippers will certainly enjoy themselves and we will be seeing some great pictures. They will be able to make the most of an enthusiastic welcome at the Monaco Yacht Club, whose know-how is well established,” declared Antoine Mermod, President of the IMOCA class. It is HRH Prince Albert II who will signal the start of the Monaco Globe Series. A nod to the fact that he also launched the 2016-2017 Vendée Globe.

A mixed line-up with some women and sailors from abroad

The first edition of theMonaco Globe Series will bring together some of the best performing IMOCAs and some top class sailors. Out of the nine boats lining up, three will be magnificent foilers: Bureau Vallée 2 (Louis Burton/Anna-Maria Renken), Newrest-Art & Fenêtres (Fabrice Amedeo/Eric Péron) and the local IMOCA, supported by the Monaco Yacht Club, Malizia II (Boris Herrmann/Pierre Casiraghi). Without foils, but with a strong crew, Paul Meilhat and Gwénolé Gahinet on SMA will be serious contenders for victory.
Three IMOCAs will be sailed by women. Aboard Monin, Isabelle Joschke will be taking a preestigious sailor with her, Alain Gautier, the winner of the 1992-1993 Vendée Globe. On Kilcullen Team Ireland, Joan Mulloy will have a lot of help from Thomas Ruyant, who will be back on the boat aboard which he took part in the last Vendée Globe. For her first IMOCA race, Alexia Barrier will be joined by Pierre Quiroga on 4MyPlanet2.

Manu Cousin, another newcomer to the IMOCA class, is continuing to get to grips with Groupe Setin. He will compete in the Monaco Globe Series with a sailor who is now well known in the class, Alan Roura. For his return to IMOCA racing, Stéphane Le Diraison has chosen Stan Maslard to sail with him on a boat decked out in the colours of Boulogne-Billancourt.

“The line-up for theMonaco Globe Series is very interesting with women being well represented and sailors from four countries (France, Germany, Ireland and Switzerland),” declared Antoine Mermod. “This event will be an opportunity to se some old names, but also to discover some new talent, who will give us  a lot of excitement in the  new period taking us up to the 2020 VendéeGlobe 2020.”

The first race in the IMOCA world championship

This new event will count a lot, as it is the first race on the calendar in the new IMOCA world championship, the Globe Series. Leading up to the 2020-2021 Vendée Globe (at the end of which we will discover the name of the IMOCA world champion), two races will take place each year with solo racing and double-handed racing. For 2018, the second race in the Globe Series will be the prestigious Route du Rhum. In 2019, there will be one event in the spring (which will be announced shortly) and then the Transat Jacques Vabre. In 2020, the skippers will take part in The Transat and then in the New York-Vendée. We should add that these events in the Globe Series will also count as qualifiers for the Vendée Globe, taking into account the number of miles raced by the skippers.

The line-up for the 2018 Monaco Globe Series