Over 30 IMOCAs duos at the start of the Transat Jacques Vabre 2019, a record! 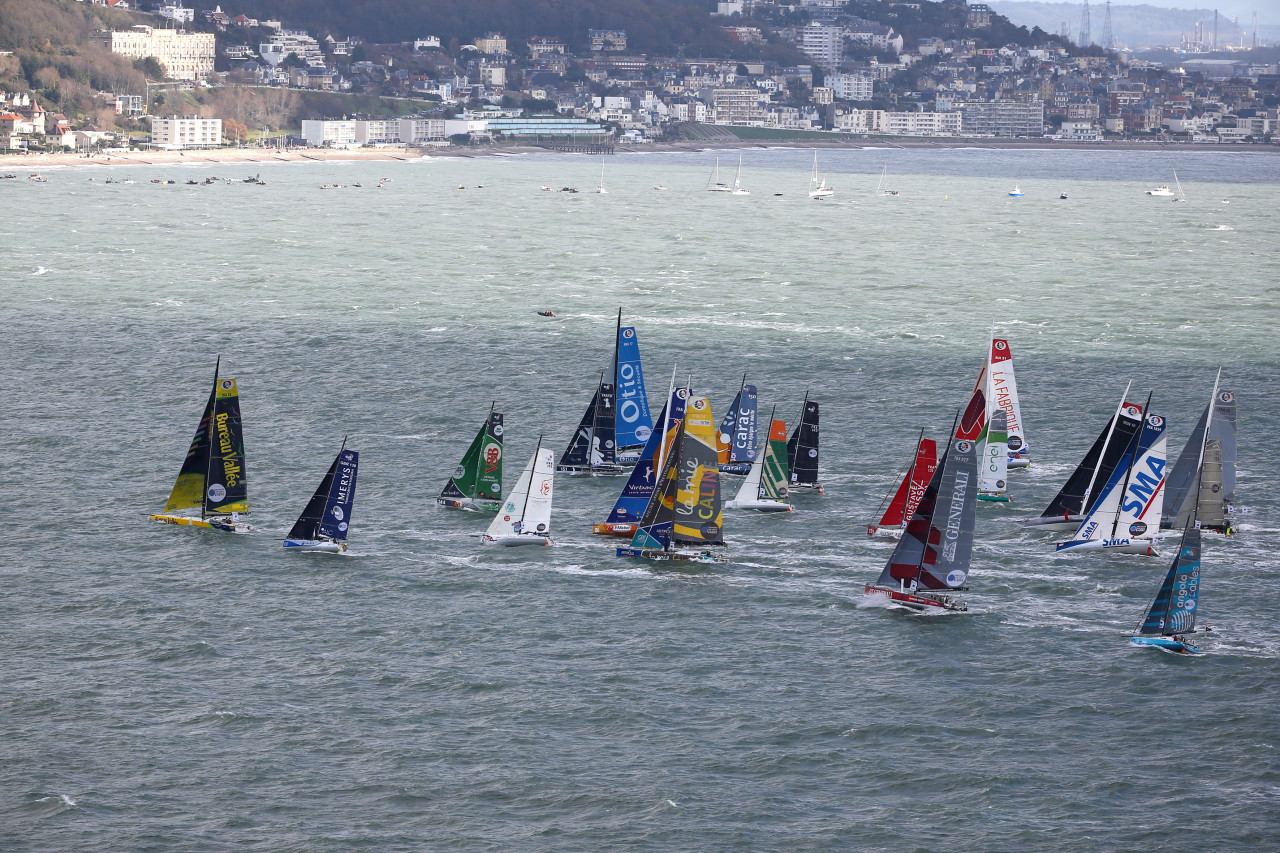 Whilst Alan Roura (La Fabrique) hurtles across the Atlantic in a bid to secure the singlehanded North Atlantic record, the list of duos signed up for the Transat Jacques Vabre 2019 was revealed yesterday as its organiser unveiled over 30 monohulls at the race start. As a result, IMOCA will be the main class represented in this latest edition of the Transat Jacques Vabre.

Jean-Pierre Dick, four-time winner and reigning champion in the IMOCA category, together with Maxime Sorel, winner of the last edition in Class40' and a newcomer to IMOCA circles, give us the low-down on the upcoming edition and recall some of their memories of the race over a coffee.

It’s historic. Never before has there been an IMOCA line-up quite like this for the start of the Transat Jacques Vabre. We’ve gone from 13 monohulls in 2017 to over 30 in 2019. The Vendée Globe effect is playing to full effect, but let’s not forget that there were 20 of them in the pré-Vendée Globe edition in 2015, which was a record participation at the time.

Among 60 of the best sailors

Prudence for the latest generation IMOCAs

At least five spanking new IMOCAs are set to take the start of the Transat Jacques Vabre, a genuine test match before the next Vendée Globe. Though Jérémie Beyou’s Charal will hit centre stage with a slight edge over her rivals in terms of preparation, the other 4 monohulls, Charlie Dalin’s Apivia, Sébastien Simon’s Arkéa-Paprec, Alex Thomson’s Hugo Boss and Thomas Ruyant’s new monohull, will have barely had two months to carry out their first sea trials. It’s worth pointing out that the sea and wind conditions were very rough during the previous pré-Vendée Globe edition in 2015, during which 11 of the 20 IMOCAs had to retire and of the 6 latest generation monohulls competing, solely Banque Populaire VIII helmed by Armel Le Cléac'h and Erwan Tabarly made the finish in Itajaí, after an epic duel, which ultimately saw Vincent Riou and Sébastien Col take the win on PRB. Jean-Pierre Dick is IMOCA’s reigning champion and the only skipper to have won the Transat Jacques Vabre 4 times (in 2017 with Yann Eliès, 2011 with Jérémie Beyou, 2005 with Loïck Peyron and 2003 with Nicolas Abiven). As such, his take on things gives us an interesting insight into the next Jacques Vabre, along with that of Maxime Sorel (V&B), a newcomer to the IMOCA circuit, albeit a reigning champion in Class40. We have a two-way interview!

What’s your take on the exceptional line-up in IMOCA for the next Transat Jacques Vabre?

Jean-Pierre Dick: "There were 13 of us at the start just two years ago, so the line-up is exceptional as it’s benefiting from the Vendée Globe effect as it does every 4 years. However, beyond that aspect, it’s fair to say that IMOCA has become the leading series in offshore racing. The fact that the 60-foot IMOCA is the boat selected to compete in The Ocean Race (Ex Volvo Ocean Race) will only accentuate this phenomenon. The first clash between the new boats will be intriguing, even though not all of them will be in full race mode by then. The most reliable boat will have the edge, which was the case for us in 2017 with StMichel-Virbac."

Maxime Sorel: "Yes, the line-up is great with some fine matches on the cards. The hunt for miles for the Vendée Globe remains wide open... This edition will be thrilling, with a very mixed line-up, comprising a fair few new boats as well as some very high-performance boats from the previous generation." What do you remember from your victory in 2017?

JP Dick: "Inevitably I have lots of fond memories of this race, which I’ve been lucky enough to win four times. I particularly recall our victory in 2017 where we took the lead thanks to a slightly daring option around the Raz Blanchard in a SW’ly wind punching into 10 knots of current and hence very heavy seas. Contrary to the advice of the weather gurus, we took the risk of going there and by the early hours of the next day we had a 15-mile lead over SMA and Safran. The race was an almighty battle, especially pitted against Paul Meilhat and Gwénolé Gahinet. Together with Yann, in whom I had complete trust, we were constantly on the attack, carrying the maximum sail area and constantly piling on the pressure and accelerating. The race was a great moment for me, culminating with my fourth victory, passing the baton to Yann, the magical finish in Salvador de Bahia, the Caïpirinhas and all the delights synonymous with Brazil".

Maxime Sorel: "I was under real pressure in 2017 as my sponsor (V&B) was under the impression that I was bound to win… I’d finished 2nd in 2015 so inevitably I could only finish 1st in 2017! My campaign got off to a bad start though as I broke some bulkheads in the boat, but Antoine (Carpentier) and I worked like crazy, breaking the 24hr-record in Class40 and taking victory with just a 17-minute lead over Aymeric Chappellier and Arthur Le Vaillant. It was just fantastic." 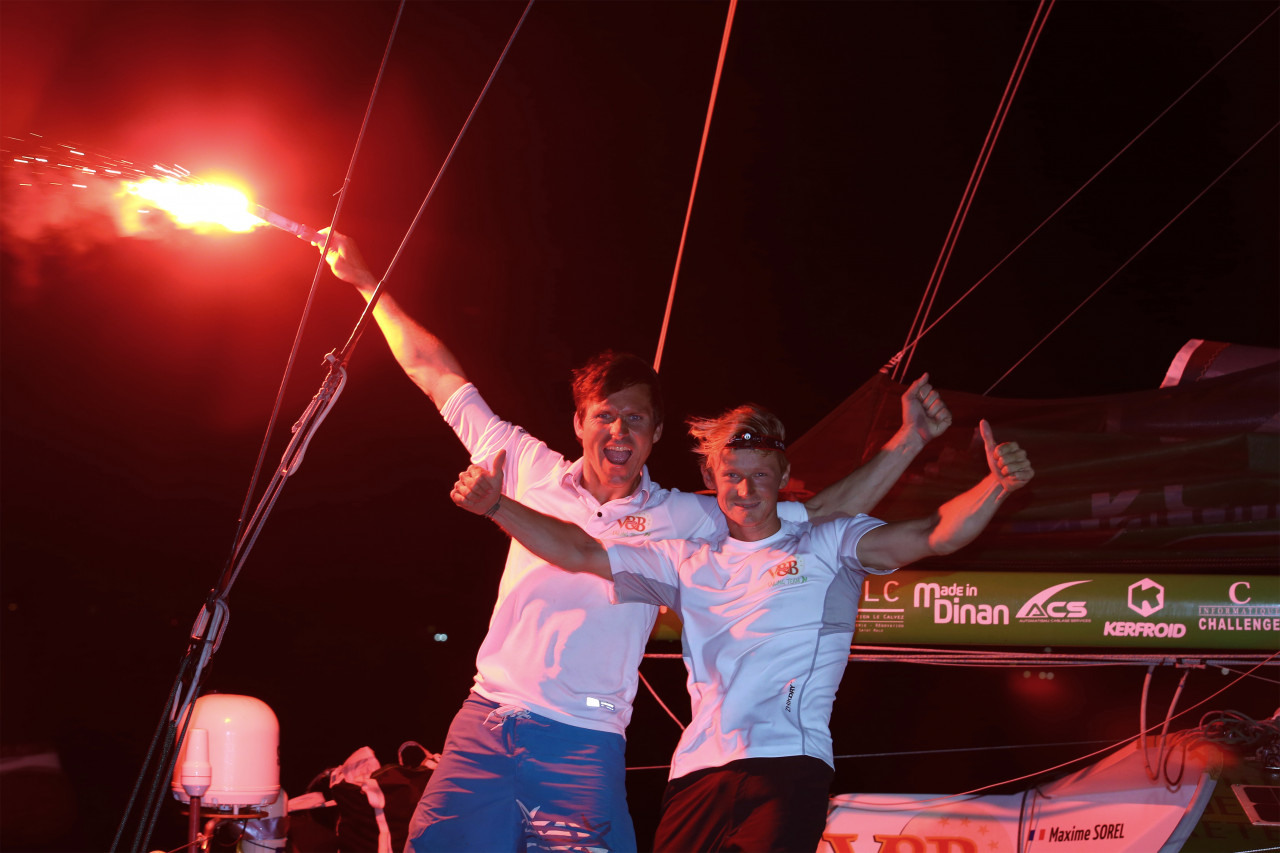 What are the main difficulties and the winning recipe for the Jacques Vabre?

JP Dick: "The Transat Jacques Vabre is a very tough race and you need to be on the attack the whole time. The calibre of the pairing is crucial, as you need to get along well and have complimentary skill sets. You also have to be able to cope with the permanent stress, because you have to maintain some very high average speeds, keep up the stamina and constantly keep your foot down".

Maxime Sorel: "To my mind, the Jacques Vabre is a much tougher race than the Route du Rhum. In essence, there are two races in one. The first is the race to the Doldrums (inter-tropical convergence zone) then the drop down to Bahia, with a fair amount of downwind conditions and high speed. I consider myself to still be learning the ropes in IMOCA, so the difficulty for me is combining a longer race and a very physical machine".

A prediction for the 2019 edition in IMOCA?

JP Dick: "That’s very difficult as we don’t know a lot about the new boats. I think Charal will be the odds-on favourite, but we mustn’t forget some of the highly optimised boats with top-flight pairings like Kevin Escoffier and Nicolas Lunven on PRB or Sam Davies and Paul Meilhat on Initiatives Coeur. Clarisse Crémer and Armel Le Cléac'h may also cause some damage..."

Maxime Sorel: "Charlie and Yann will be formidable on the new Apivia, as will Jérémie Beyou and Christopher Pratt on Charal. We’ll also have to keep an eye on Initiatives Coeur (Sam Davies-Paul Meilhat), Malizia, PRB and why not Maitre CoQ with Yannick Bestaven and Roland Jourdain, who’ve got in a fair amount of training".