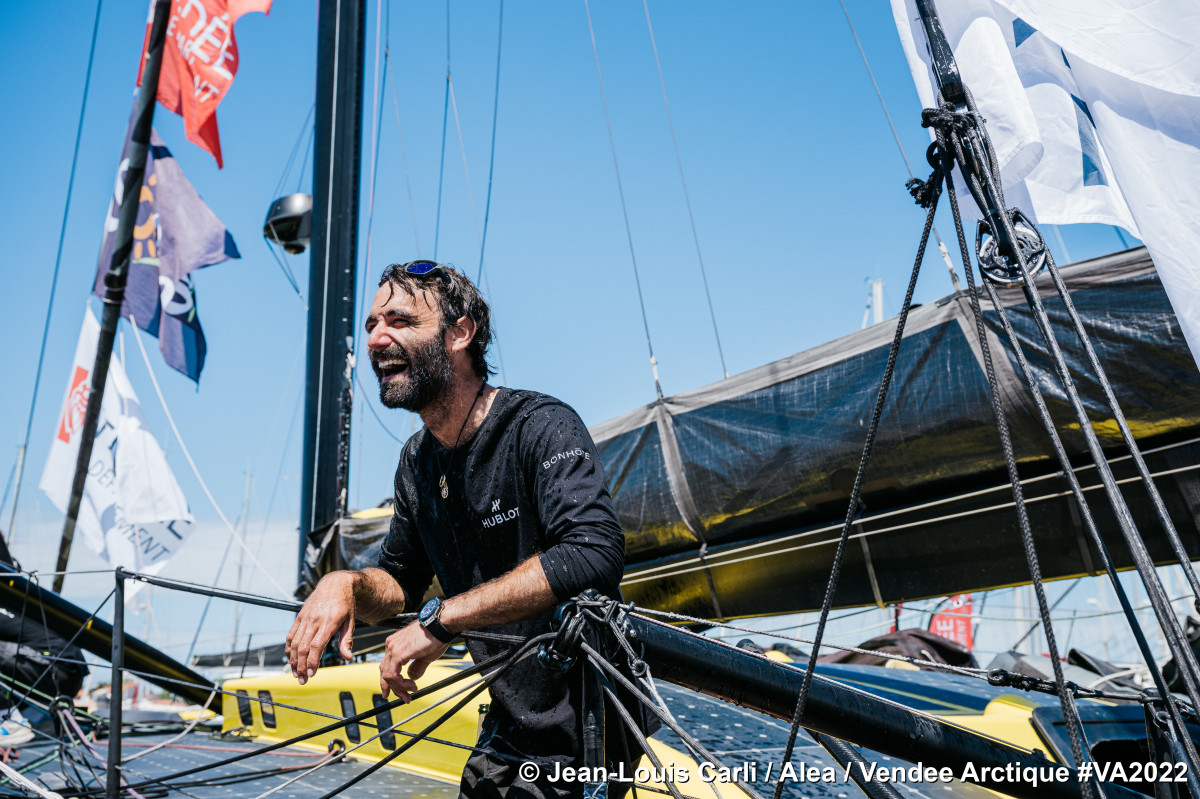 Stories were shared of hard lessons learned, decisive moments and personal triumphs, closing out the second running of the event.

Hugues Aufray’s sullen Santiano flowed from an accordion and over the crowded docks as the IMOCAs reversed gingerly, one by one, into their spots, cameras snapping and crowds applauding, champaign misting through the rows of well wishers. The sailors are home.

The reception emanated relief. And the most stunning perspectives from this Vendee Arctique were surprisingly not the spray slashed images of the foiling IMOCAs and their skippers ripping through the gray North Atlantic. It was the drone footage looking down on the vast, green-covered mountain scape of an Iceland fjord and two 60-foot race boats dwarfed by the epic scenery that drew the breath of observers and skippers alike.

The sailors in this Vendee-Arctique, as with the first, failed to make it around this great, snow-capped rock in the high latitudes. The race was shortened due to a deep depression that packed an even bigger punch than expected with the dense, cold air. But despite five retirements, all are arriving in port relatively unscathed, boats, rigs and bodies in one piece and all have been sharing their memorable moments.
“The first 24 hours I was still in race mode and waiting for the re-start,”said winner Charlie Dalin (APIVIA) who rested, attached tenuously to a large, yellow mooring buoy, in a deep fjord surrounded by snow-dusted mountains and green shores. “I didn’t have much info. I was worried breaking free and drifting into the mooring behind me. I was trying not to lose my boat.”

The second 24 hours was a big change for Dalin.

“After they announced the finish, I decided to fly my drone to celebrate,”said Dalin. “It was so beautiful. If it took 30 minutes more before I could go to sleep it didn’t matter at that point.”

Outside the fjord where Dalin and third place Thomas Ruyant (LinkedOut) hung quietly from their moorings, the other finishers were getting pasted by the erratic, gale-force gusts and rugged seas.

“The sea was quite rough and there were cross waves everywhere,”said third place Jeremie Beyou (Charal). “I had to adjust every second. I put three reefs in the main but the sea state and tide was difficult,” he said, shaking his head. “I had a bit of traveler down and pushed the rudder all the way over and tied it. We’d go upwind a bit and then backwards and sometimes it would do spins.”

Beyou, like many of the sailors, was fearful of approaching the jagged coastline. “The first night and first morning I was ok,”he said. “I was staying outside since I was expecting the race to go on. I wanted to stay ready for the start.”

Struggle and beauty are part and parcel in the high latitudes of the Northern Hemisphere. This race sought the struggle and some of the sailors saw both. In these challenging conditions, the sailors got what they had wanted: a test.

Louis Burton (Bureau Vallee) went deep into learning mode, exploring the potential of his boat that had some of the fastest 24-hour runs in the last Vendee Globe in the hands of Armel Tripon.

“It is very fast but complicated downwind,” Burton said of his Sam Manuard-designed IMOCA. “This boat is too fast with the apparent wind to sail with a spinnaker and it’s complicated with a gennaker, so I am learning and trying to figure out a solution.”

Many observers believe the boat, with reversing curves on Its bright yellow foils that uniquely exit the hull near the deck, has the greatest speed potential of any current IMOCA.

Alan Roura’s (HUBLOT) ex-Hugo Boss boat is seen in the same inquisitive light as Burton’s, an as-yet untamed beast. And the young Swiss sailor said faith in his boat and himself rose in this race.

“If you had a question in your head at all your were screwed,”said Roura. “I was stuck with Benjamin (Dutreux, Guyot Environnement - Water Family). We were close to last for eighty percent of the race. People were saying it was impossible and I kept saying, ‘Don’t worry about it. Don’t worry.’”

Roura trusted his ideas without question and used the last stretch of the race to vault into seventh and the top international slot. His reward was on his more relaxed ride back to Les Sables d’Olonne. Along with the rest, he floated between concentration, reflection and joy.

“Yesterday it was beautiful,” he said. “We were reaching and racing but really enjoying it. Two boats, two miles apart. Just flying along.”

[The remaining competitors will be arriving in Port Olona throughout Thursday and into Friday.]