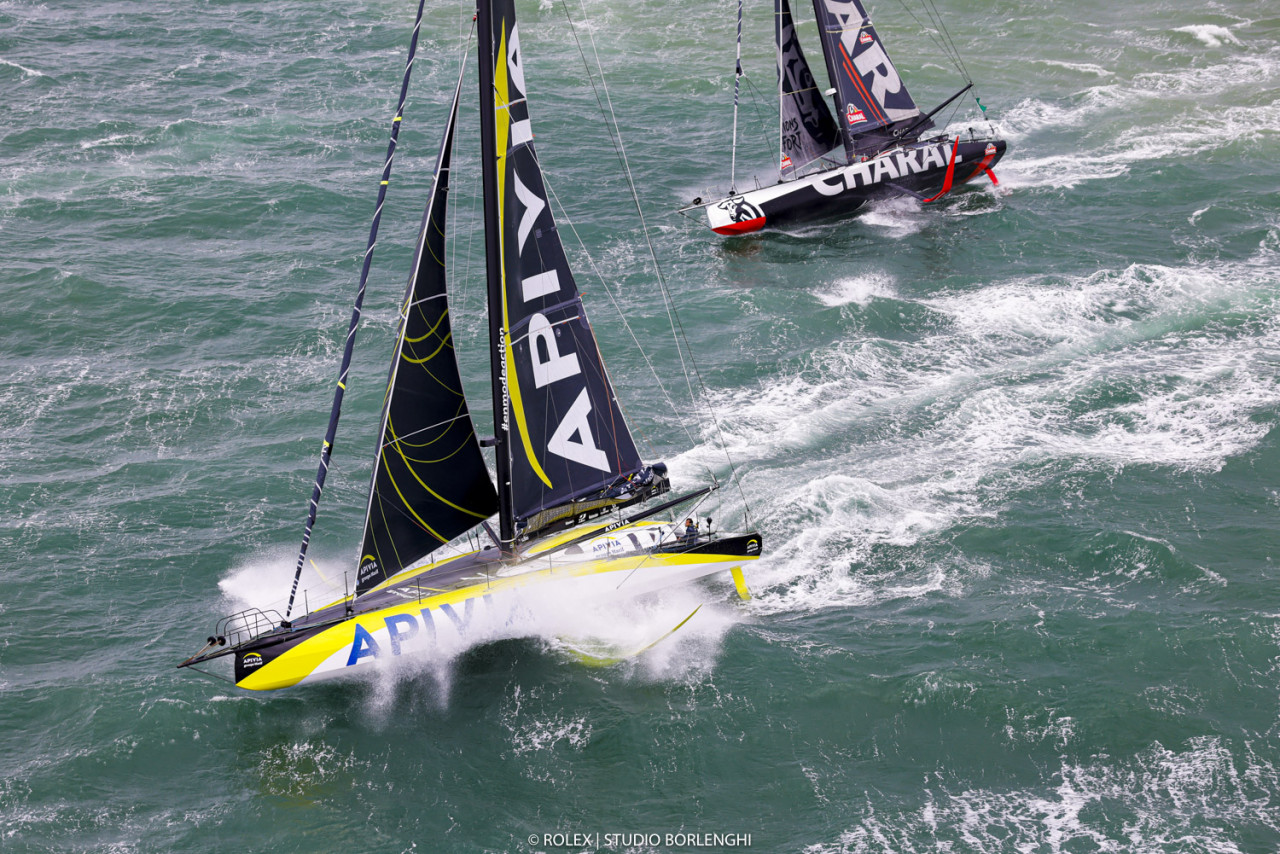 The Frenchmen on the white and yellow IMOCA led from the very early stages as the fleet smashed its way out of the Solent and they never looked back.

After nine hours on starboard tack, they hit the southwest corner of the racecourse north of Paimpol and reached the southern Irish coast due south of Skibbereen, having tacked three times since the Needles Channel.

On the way back from the Fastnet Rock, tracing the race’s new course to Cherbourg, the Dalin and Meilhat masterclass continued. They were not afraid to do their own thing and got right in under the Cornish coast out of the tide, playing the breeze as they made their way east.

All along, there was the danger that the chasing boats, led by Jérémie Beyou and Christopher’s Pratt’s Charal, would come back on them with the breeze, but APIVIA was out of reach. She went on to score a convincing win, crossing the finish line more than six hours ahead of Charal.

A delighted Dalin who, alongside Meilhat, now sits in third place in the new IMOCA Globe Series rankings, spoke of what he called a “magical sequence of weather conditions”after an extraordinary race when Apivia never once punched into foul tide, an unheard achievement on the Fastnet.

“We never sailed against the current – we had the first (switch in tidal direction) at the Île-de-Bréhat and before that we took advantage of the current at the Alderney Race,” he said. “It reversed just after us, which slowed down our competitors. It was a great sequence from start to finish.”

Meilhat is loving racing alongside Dalin, the two Vendée Globe veterans already forming a formidable partnership that will start the Transat Jacques Vabre (TJV) in the autumn among the favourites. “It’s great,”he said. “I’m really happy to be sailing this boat which is incredible. Charlie knows it inside out, so it’s pretty easy for me to get the hang of it.”

Behind them, Beyou’s arrival off Cherbourg signalled the start of a now familiar pattern in IMOCA races, long or short, with boats finishing within minutes of each other. Charal, then 11th Hour Racing Team and ARKEA PAPREC crossed the line in less than three minutes, with Initiatives-Coeur another four minutes back in fifth place just ahead of Fortinet-Best Western. There was no last gasp recovery for Alex Thomson and Ollie Heer on HUGO BOSS who finished in tenth place with only Clément Giraud and Erik Nigon’s Compagnie du Lit-Jiliti behind them.

Beyou had set sail as the defending Fastnet Race champion. But he was happy to finish runner-up to a team that he admitted was in a different world on this 695-nautical mile race, that features a highly technical course, complete with tidal gates, multiple traffic separation schemes and coastal features.

“I think we did the best we could,” said Beyou. “APIVIA was really a step above in this race. They sailed well from the start, they knew how to find the right flying mode in the Solent, go to the right place straight away and then it just clicked for them. Their timing was perfect. They made zero mistakes, so congratulations to them.”

Beyou spent almost the entire race in a close-fought battle with Sébastien Simon and Yann Elies on ARKEA PAPREC the two IMOCAs vying for the advantage in a variety of conditions, sometimes up on the foils, sometimes not. “It was interesting in terms of performance to try a lot of little things,”said Beyou. “We saw that they were going really fast. It was difficult to keep up with them and to catch them when they passed in front of us."

“Then we sailed well last night,” he added, “we stayed focused because we knew that the fleet was going to come back from behind, so we had to keep our cool and manage to hold off those who were getting close to our transom.”

Among the crews gaining all the way to the finish was Simon Fisher and Justine Mettraux competing in their first double-handed race together in the IMOCA fleet on board 11th Hour Racing Team. They were always in the mix in the lower reaches of the top-five, before pulling off an excellent finish when they got ahead of ARKEA PAPREC in the closing stages to round off the podium in third place.

Fisher – known to one and all in pro sailing as “Si-Fi” – was thrilled to finish strongly on his first outing ahead of the TJV, even though he spent most of his final hours of the race worrying about whether they would be overtaken as well. “Yesterday evening into last night was quite tense because the guys behind were more headed with more pressure and we were more lifted and having to gybe down,”he explained. “We were always nervous that the boats behind would catch up and get inside us, so it was tricky to manage the situation.”

The partnership with Mettraux is working well – two highly experienced offshore sailors combining talents. “We basically worked our tales off all night to make sure we kept going fast,” added Fisher. “And we were very happy we did a good job of not wearing ourselves out and not having anything left for the finish. We both got a couple of good hours sleep and hit it hard this morning.”

Chasing them all the way to fifth place was Britain’s Samantha Davies and Frenchman Nicolas Lunven, also sailing together for the first time ahead of their own TJV campaign on Initiatives-Coeur. For them the final stages turned into a nail-biting battle with Davies’s partner Romain Attanasio enjoying his first outing on Fortinet-Best Western, the former Seaexplorer-Yacht Club de Monaco.

“Romain caught us up and we were at an angle where his boat was faster than ours – so that was quite annoying, but we managed to hang in there,”joked Davies, who got in six minutes ahead of Attanasio.

The British sailor spoke before the start about the influence the Alderney Race could have on the final stages of this contest if the breeze went light. And so it proved. This time she was ready to make the best of it. “We arrived (in the Race) when the tide turned in our favour, but there was so much current that it cancelled out the wind,” she said. “Then you end up with no wind and the current sluicing you out to the north. We tried the ‘northerly outside option’ – to have less sideways current and more forwards current. That gave us a big gain at the end which made it safe with Romain, because he got a little bit stuck there, while we caught the others up.”

Davies also reflected on the spectacular start that saw the IMOCAs beating down the Solent with wind against a spring tide kicking up a steep and boisterous seaway. “It was epic,” she said. “It was really cool to take part in that and be there on the start line. It was very stressful – our objective was just to get out of the Solent in one piece.”

With two events now completed – the first being the Ocean Race Europe – the new IMOCA Globe Series ranking have Mettraux and Fisher in first place, with Benjamin Dutreux in second position, after finishing the Fastnet on Groupe APICIL in seventh position. Beyou and Pratt are fourth behind Dalin and Meilhat, with Simon and Elies fifth and Davies and Lunven sixth.