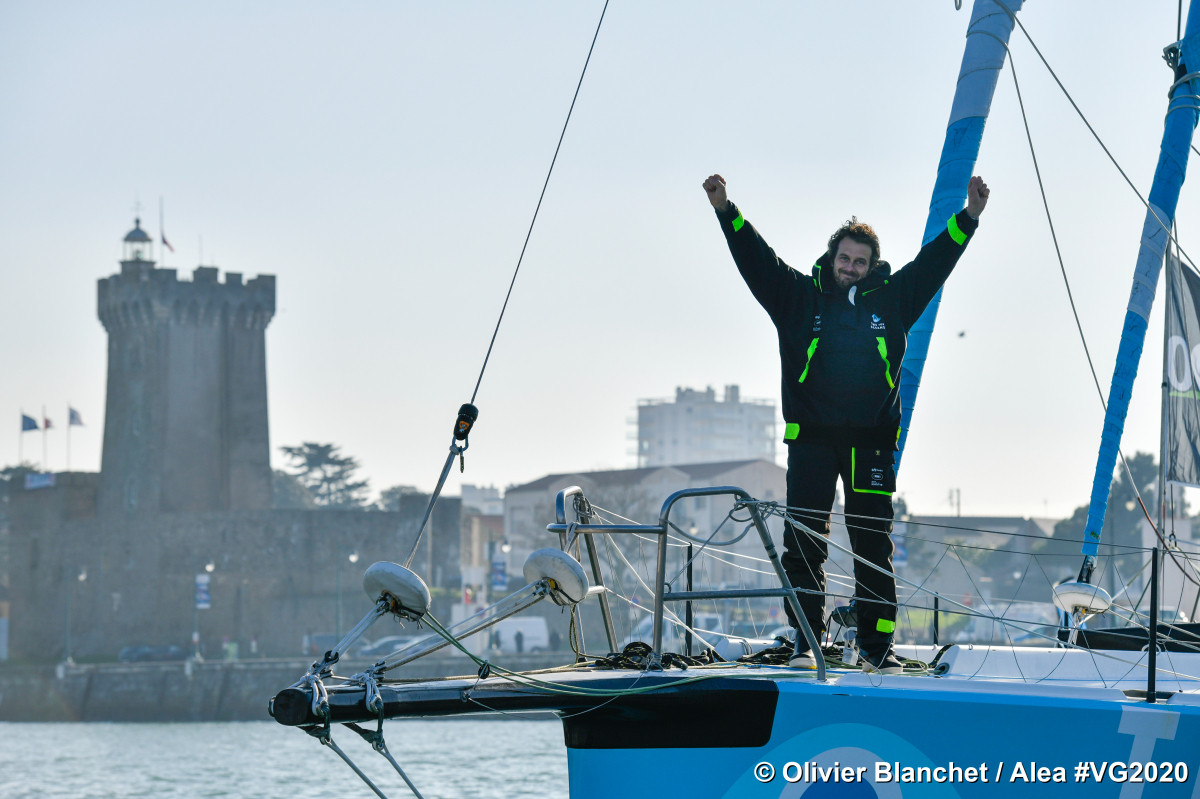 French skipper Stéphane Le Diraison crossed the finish line of the Vendée Globe this Thursday night on his Time for Oceans at 21:36hrs UTC taking 18th place and narrowly missing out on going one better, after a close match race with Swiss skipper Alan Roura which has gone on for the last week of their race.

Le Diraison’s finish today marks the biggest success in the career of the 44-year-old sailor from Lorient, who was forced to abandon the 2016-17 Vendée Globe on the 17th December 2016 when he dismasted racing the same boat as this edition and had to sail under jury rig over 750 miles to Melbourne, Australia.

This edition, he has enjoyed a close and intense race all the way to the finish line today, after making a substantial comeback in the Indian Ocean when he was left very isolated by light winds in the South Atlantic high-pressure system. He re-connected with the group comprising Roura, Pip Hare, Kojiro Shiraishi and Arnaud Boissierères, with all five skippers finishing within 24-hours of each other, and Hare expected to cross the finish line in the early hours of the Friday morning (12th February).

Stéphane Le Diraison showed total determination throughout the race, facing up to tricky weather situations and dealing with damage, while happily living his dream. This positive outlook on life may well have been the result of a cycling accident at the age of sixteen. “For me, there was my life before the accident and my life after the accident. I suddenly gained ten years in terms of maturity and you could say it was a lucky stroke. It made me determined to succeed in everything I do. Because in fact, I know why I am doing it. It was a key moment in my life,” the Breton sailor declared before the start on 8th November.

Sailing the same boat as in 2016, that was originally built as Alex Thomson’s HUGO BOSS, and until today had never finished the Vendée Globe despite three previous attempts, the boat has undergone a significant upgrade and is now equipped with foils. A trained engineer from Hennebont near Lorient, Le Diraison had a simple, but powerful message to convey aboard his revamped Time for Oceans: “It is time we acted to save our planet!”

We saw another example of his concern for the natural environment while he was sailing off Uruguay on his way back up the Atlantic.“I just encountered several factory ships. These monsters work in groups and pick up everything under the surface in their giant nets. Everyone knows these genocide boats exist but seeing them in operation is shocking and underlines man’s propensity to destroy his environment. What can we do about it? As consumers, we have a lot of power and can choose the products we buy.”

Never far from Alan Roura, Arnaud Boissières, Kojiro Shiraishi, Pip Hare and Didac Costa, Stéphane Le Diraison experienced the same sort of intense racing as the ten frontrunners in this Vendée Globe. This race within the race was demanding and forced the sailor to seek out performance and dig deep within himself to find the required resources.  At the same time this close contact racing led to an understanding between the competitors.“All six of us will have the same feeling of not needing to talk to each other. Just looking at each other will be enough, as we all know what each of us has been through in this shared experience. We can’t wait to get together. We will have deserved that,” the skipper of Time for Oceans said a couple days ago.

This race within the race continued to the finish aboard a tired boat. “The boat is damaged. Yesterday, I tore a sail. There is a leak in my keel rams. The rigging cannot be tightened and there is nothing I can do to avoid the boat going all over the place. I broke my top hook, so I cannot fully hoist my mainsail. It’s a long list. The boat is telling me it’s time to go home.”

FACTS AND FIGURES ABOUT

Designer: Finot-Conq
Launched: June 2007 (designed for Alex Thomson)
The same boat Stéphane Le Diraison sailed in 2016, but fitted with foils and made lighter.