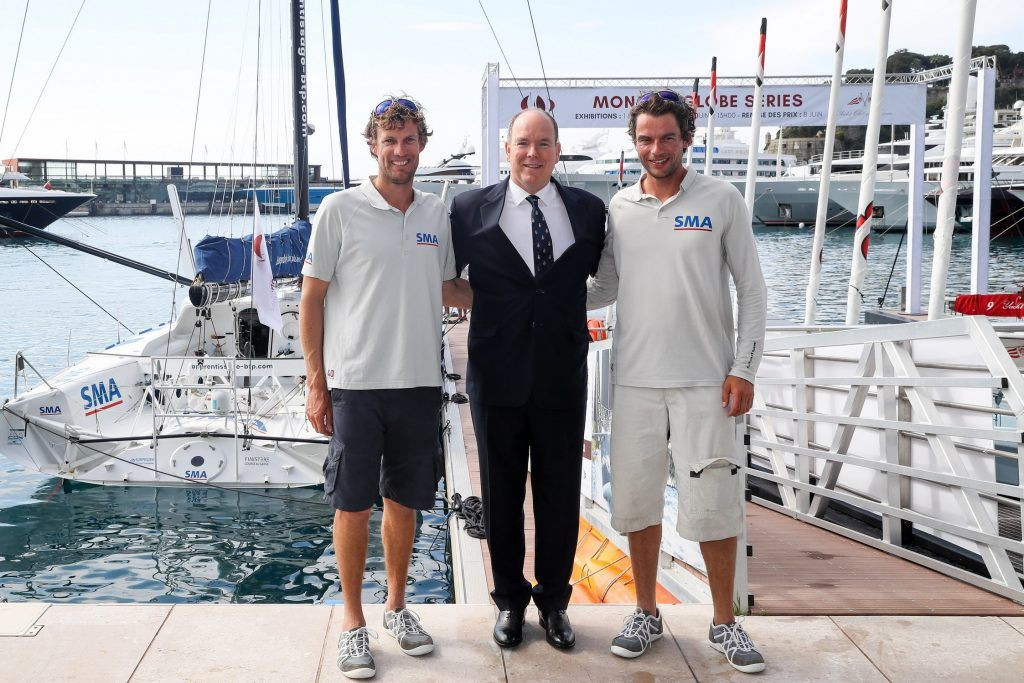 On crossing the line at 0817hrs this morning (Thursday) after 3 days, 19 hours and 17 minutes of racing, Paul Meilhat and Gwénolé Gahinet (SMA) won the Monaco Globe Series, the first leg of the new IMOCA world championship. Less than two hours later, the mixed pairing of Isabelle Joschke and Alain Gautier (Monin) did well to take second place, finishing just ahead of Fabrice Amedeo and Eric Péron on Newrest-Art & Fenêtres. The double-handed crews formed by Joan Mulloy/Thomas Ruyant (Kilcullen Team Ireland) and Stéphane Le Diraison/Stan Maslard (Boulogne-Billancourt) completed the top five in what was a breathtaking and instructive race for everyone.

An exciting and hard fought new race, the first event in the Globe Series, the new IMOCA world championship for the 2018-2021 period, lived up to its promise. In conditions that can only be described as typical of the Mediterranean, as the weather was unreliable and demanded a lot of the sailors, the nine pairs competing went through nine technical and stressful days. After setting sail from Monaco last Sunday, the IMOCAs raced in a magnificent setting and everyone enjoyed themselves out on the water. They headed towards the Strait of Bonifacio before rounding Sardinia from east to west and then headed back up to the Golden Isles, returning to the Principality in a long Mediterranean coastal race.

Paul Meilhat and Gwénolé Gahinet winners of this “crazy race”
They were the favourites in the Monaco Globe Series and managed to confirm those predictions. Aboard SMA, Paul Meilhat and Gwénolé Gahinet warded off the attacks from the determined crews behind them, starting with Fabrice Amedeo and Eric Péron, who remained very threatening on their foiler, Newrest – Art & Fenêtres. “It was extremely physical and tough on the nerves,” explained Meilhat, who won the Bermuda 1000 Race just a few weeks ago. “It reminded me of what I experienced racing on a Figaro in the Mediterranean. In terms of the race, it was crazy with a lot of action. Whether you were ahead or behind, it was never over. But there’s nothing more interesting in terms of adrenaline. You feel alive when you race in the Med!”
Still in with a chance of winning last night, Fabrice Amedeo and Eric Péron had a great race, but in the end had to make do with third place. Fabrice Amedeo: "We may be a bit disappointed, as we almost made it to second place. But upwind, in five knots of wind and with no daggerboard, it wasn’t going to be easy to keep with boats like SMA and Monin. What we will remember however is that we were up with the frontrunners in this battle from start to finish and we were the first foiler to cross the line.”

The mixed pairings in the best of shape
Isabelle Joschke and Alain Gautier (Monin) never eased off and in fact overtook their rivals just a few miles from the finish in Monaco to take second place. A strong performance rewarding a well-managed race. Another mixed double pairing also did particularly well in the Monaco Globe Series. Aboard Kilcullen Team Ireland, the Irish skipper, Joan Mulloy took fourth place along with Thomas Ruyant, who was back on the IMOCA, aboard which he took part in the last Vendée Globe.

Contests at every level with nine boats safely home
Further back, two double-handed crews fought it out like cat and dog to make it to the top five. Respectively seventh and eighth yesterday evening, Boulogne Billancourt (Stéphane Le Diraison/Stan Maslard) and Groupe Setin (Manu Cousin/Alan Roura) clawed their way back during what was a decisive final night to finish fifth and sixth in Monaco. “This was a useful experience for the future of Groupe Setin, as I’ll know better now how to get the most out of the boat. I’ve been throwing everything at this project and that will be continuing in the future,” said a smiling Manu Cousin at the finish.
Two crews sailing IMOCAs with foils suffered in the Mediterranean weather and have to make do with a result that is probably below what they were hoping for. Malizia II (Boris Herrmann/Pierre Casiraghi) and Bureau Vallée 2 (Louis Burton/Arthur Hubert) crossed the finishing line in seventh and eighth place. Pierre Casiraghi: “It was really a fantastic race with lots of ups and downs. It was tough once we’d passed the Strait and we really had to fight hard to climb back up towards Port-Cros with the gaps narrowing within the fleet. The Mediterranean lived up to its promise with a wide range of extremely varied conditions. It was a race that was exciting and an incredible experience.”

Alexia Barrier and Pierre Quiroga brought up the rear this afternoon (Thursday) in spite of their brave efforts on 4MyPlanet2, the oldest boat in the fleet (launched back in 1998). All of the boats competing in the Monaco Globe Series are now safely back in port.