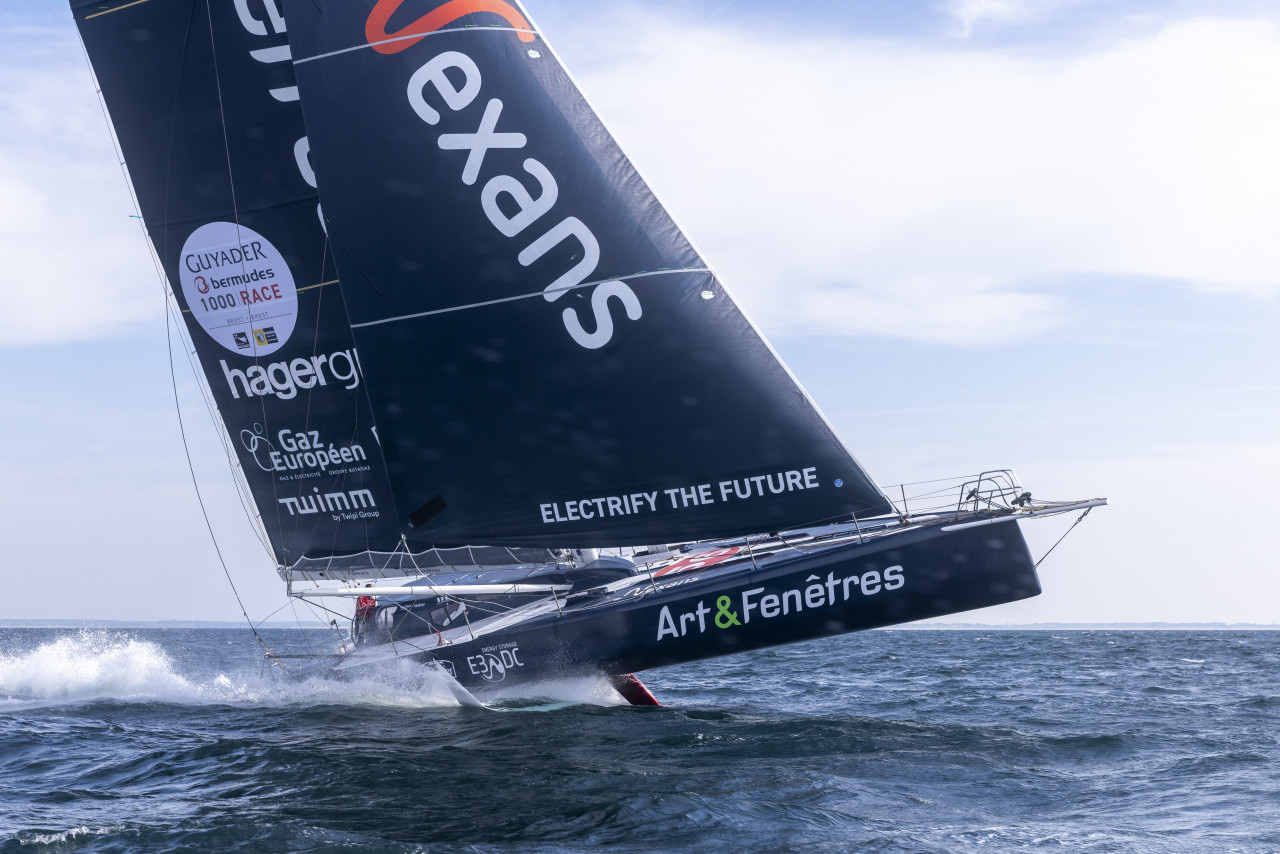 It’s time for the first race of the new IMOCA season and the IMOCA GLOBE SERIES championship of 2022, with an unprecedented 24 solo skippers set to compete in the third edition of the Guyader Bermudes 1000 Race which sets sail at 14.00hrs local time on Sunday.

A 1,200-nautical mile course from Brest back to Brest, via the Fastnet Rock and a waypoint northwest of Cape Finisterre, this sprint race marks the beginning not just of an exciting 2022 season, but the build-up to the Route du Rhum in the autumn and to the Vendée Globe solo round-the-world race in 2024.

In 2018 the first Bermudes 1000 Race saw just six entries and then 17 at the start of the last edition in 2019. But with the IMOCA Class enjoying extraordinary commercial support, and an abundance of skippers with well-resourced campaigns, this edition will be by far the biggest in terms of turnout.

The field includes some of the top performers from recent years, among them Charlie Dalin on APIVIA, Jérémie Beyou on Charal and Thomas Ruyant on LinkedOut. There are some very interesting skippers partnered with newly-acquired boats for the first time including Alan Roura on Hublot (ex-Hugo Boss), Pip Hare on Medallia (ex-Bureau Vallée) and Damien Seguin on Groupe APICIL (ex-Maître CoQ IV). The fleet includes two female sailors, five IMOCA rookies and no less than 17 Vendée Globe veterans.

“For sure it is a fantastic fleet with all the different campaigns starting in the IMOCA Class,”commented race co-director Hubert Lemonnier. “We know all these boats are hard to prepare and hard to run, so it’s very cool that we have so many of them ready to race in the spring of 2022. But we are not surprised because the Class is more and more professional and the teams are ready.”

Among the skippers gathering at the Port du Château in Brest is the 29-year-old Swiss veteran of two Vendée Globes, Alan Roura, who will be racing on board the former Hugo Boss that he purchased late last year from the British skipper Alex Thomson. Roura is looking forward to a race that marks the beginning of a new chapter for him in the colours of the watch-maker Hublot.

“The Guyader Bermudes 1000 Race is cool because there are a lot of new skippers on new boats,” he told IMOCA. “So it will be about finding out how to use them, how to sail powerfully with different sails. Half the fleet are starting with a new generation of boat, so that’s quite interesting to see the difference between boat and skipper.”

Roura says he will be looking for a top-10 or top-eight result, but admits he will also be using the race as a training exercise after 4,000 miles practice over the winter. “I will be trying to find a way to sail this boat powerfully,” he explained. “So the objective is first of all qualification for the Route du Rhum, and then I would like to play with the other foilers. I have managed to sail quite a lot on the boat, but not against the others – it’s always the same when you are alone, you are the best. But when you have more boats around, it’s different. So I want to complete a nice race, heading in the right direction and make the boat go fast – I will be happy with that.”

Also in a new boat is the New Zealand/USA skipper Conrad Colman, who has purchased the former VandB-Mayenne that completed the last Vendée Globe in the hands of Maxime Sorel. Now racing under the name Imagine, Colman will be using the race to showcase a new campaign that requires a title sponsor with the sort of corporate social responsibility and environmental awareness credentials that this tenacious skipper has always promoted.

The 38-year-old, who is married with two young kids and lives in Lorient, completed the 2016-17 Vendée Globe under jury rig and without consuming any fosil fuels. The Guyader Bermudes 1000 Race will be his first big outing on the new boat after completing the 500-mile qualifier for the race in April.

“The boat is fantastic,”he told the Class. “It is a big step-up from the last IMOCA that I sailed solo in the 2016 Vendée Globe, and yet it feels very familiar. I’ve done two races around the world in an IMOCA with dagger-boards and I feel very much at home, even though the boat is new to me. While I will certainly be pretty modest in my ambitions when it comes to our first race together, given the short amount of time we have had to train and get ready, I feel pretty at ease and happy to get cracking.”

Like many IMOCA skippers hunting a place on the startline of the 2024 Vendée Globe, Colman knows that getting as many miles under the keel as possible, as soon as possible, is a big step in the right direction. “I think it is going to be an excellent event,” he said. “I think it will really set the scene for the rest of the cycle in the Class, given the fact that we are all chasing miles at this point."

“There are going to be no small events between here and November 2024, so I think we can forget the idea that there are going to be off-days or off-races,” he added. “Everybody is going to be there, they are all bringing their A-game and, while there is a lot of pressure on everybody’s shoulders, I think it’s good for the Class because everybody’s treating every event with the respect it deserves.”

Among the non-French skippers in the race will be Pip Hare, the British navigator who now sails the former Banque Populaire VII that won the 2016-17 Vendée Globe and came third in the last race in the hands of Louis Burton. After an intensive month’s training based at Cascais in Portugal, where she benefitted from coaching by Jack Bouttell and Ben Schwartz, Hare is preparing herself for her first competitive outing on a foiling flyer, now complete with Medallia branding.

“It feels like it has come round so quickly. It’s nerve –wracking – it’s a big fleet with some big names this year,” said the 48-year-old from Poole on the English south coast who came 19th in the last Vendée Globe in the second oldest boat in the fleet. “The boat has had a great re-fit, it is in great condition and I am turning up on very different terms. This is kind of a line in the sand for me; this is where I need to progress forwards from and I’m kind of here thinking I don’t know what this race is going to look like, I don’t know how I am going to line up against these people.”

Hare is trying to make a transition, moving from the middle-to-back section of the IMOCA fleet to the top-10. It’s a big step performance-wise and psychologically, and she is well aware of the scale of the task ahead of her. “When you go into something as an underdog, you look at everyone else and put them on a pedestal,” she said. “Everyone else in the fleet is just in a different league to you. And now, I haven’t changed, I don’t feel like I’ve changed as a person, but all of a sudden I am one of them.”

We asked what her goal for this race will be? “I don’t think a hard number in terms of results is enough of an objective for me,”she said. “It is a relatively short race. I am well prepared. I’ve had a really good session of training, so my objective would be to maintain the boat’s performance at a steady rate through the race – make sure I hit my polars, not find any excuses, just take everything I’ve learned and apply it. I would hope that is going to get me a top-10 result.”

The action at the Guyader Bermudes 1000 Race gets underway on Friday with speeds runs on Brest Harbour as the IMOCA crews compete in the Pom’Potes Challenge.

Click here to get all the information about the race