The Défi Azimut taught us a lot 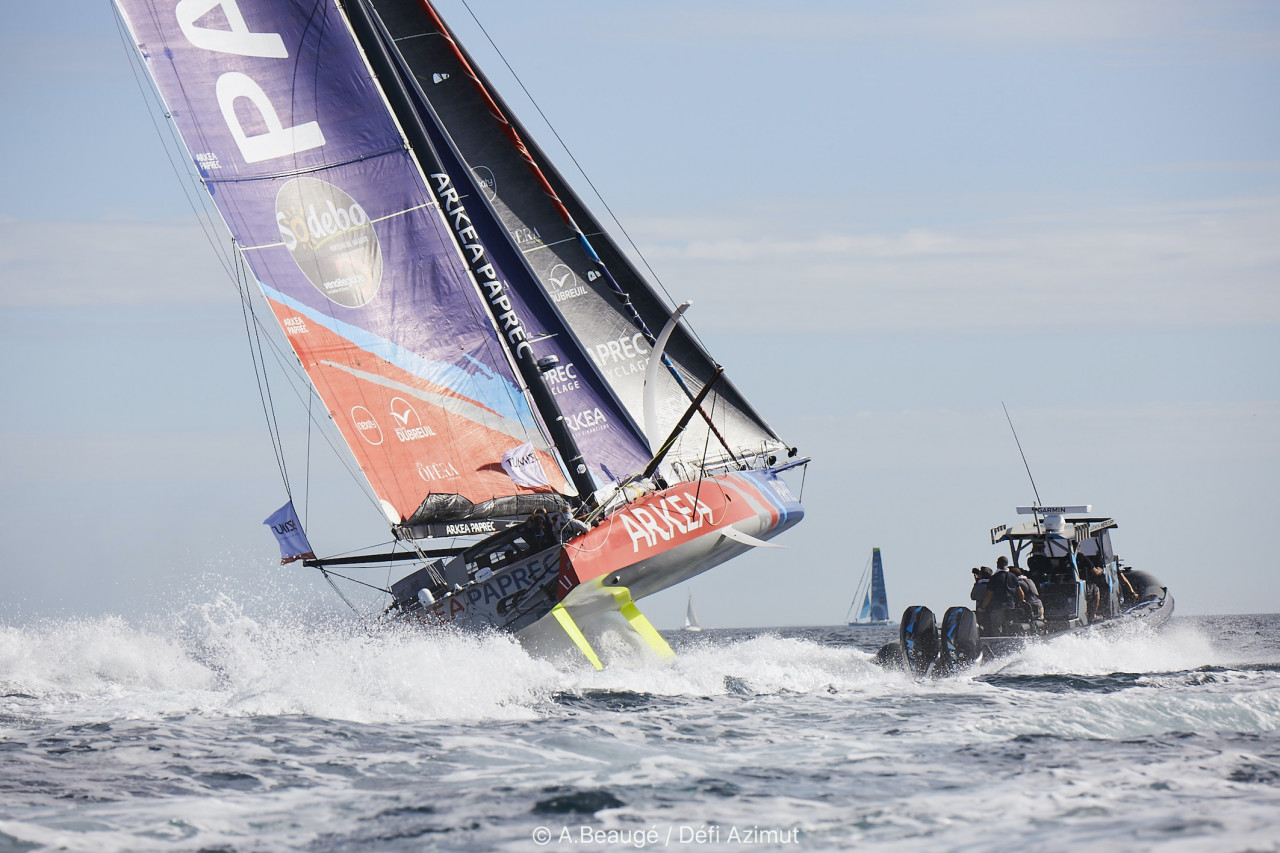 After Charal totally dominated the event last year, this 2020 edition raced in summer-like conditions, showed that the fleet are getting closer and closer together in terms of racing at the highest level. The next big event for the IMOCAs will be the start of the Vendée Globe on 8th November.

The second IMOCA race event of the season after the Vendée-Arctique-Les Sables d’Olonne, the Azimut Challenge was something many teams had reserved in their diary. In the end, seventeen boats including eleven foilers raced during the five days in Lorient. The event enabled us to discover several IMOCAs in their latest configuration: Thomas Ruyant was trying out the second version of his foils on LinkedOut; Stéphane Le Diraison took part aboard his 2008 Finot designed boat in her new configuration. Time for Oceans underwent a thorough six-month long makeover in the Multiplast yard with in particular foils being fitted (the same as on Jérémie Beyou’s 2014 Maitre CoQ), a new coach roof and new rudders... As for L’Occitane en Provence, this was her second appearance after Armel Tripon was forced to retire early from the race back in July and Sam Manuard’s highly original design clearly has a lot of potential.

A lot of excitement

“The standard of preparation that has gone into the boats is excellent. It is true that the conditions were more like summer, but everyone showed determination and there was fortunately no damage to report,”noted Antoine Mermod, president of the IMOCA on the pontoon in Lorient. After things got going with the runs, which saw victory go to ‘L’Occitane’ with a speed of 23.35 knots, the main event involving 48 hours of racing will be remembered for its uncertain outcome right up to the finish.

“The first night was very fast with impressive speeds close to thirty knots in winds that did not get above twenty knots,”added Antoine Mermod. “In the end, it was Charal that came out on top, but APIVIA was for a long time out in front, with LinkedOut threatening and l’Occitane en Provence never far behind. It was wide open and we saw too that foilers like PRB and Initiatives-cœur, which were sailed very well can still get all the way up there. It was more like a leg in the Solitaire du Figaro, which in terms of sporting commitment is the reference.”

It was indeed exciting all the way to the finish in this 48-hour event. Kevin Escoffier who looked like the race was his for the taking, fell into a trap in the flat calm seas. Over the final few lengths, Jérémie Beyou grabbed victory. He was followed by three women who therefore made it to the top four - Samantha Davies, Isabelle Joschke and Clarisse Crémer. All three dealt well with the light airs off Pen Men Point and turned things around at the finish.

A clearer picture of the fleet

We are now getting a much clearer picture of the various groups within the fleet. At the top of the table, we have seen that many boats have been able to compete with Charal, which remains the reference in the new generation and aboard which there have been the most developments.

Just behind, there is a group of four older IMOCAs from the 2018 or 2019 generation that have been fitted with foils and still have plenty to show us: Initiatives-cœur, MACSF, PRB and Seaexplorer-Yacht Club de Monaco*. They are followed by the fleet of foilers from 2015 or before, which have often been able to show their strength alongside the best IMOCAs with daggerboards like Banque Populaire X, Groupe APICIL and V and B-Mayenne.

The Défi Azimut is an event that pleases the racers and is now a key event and so quite logically will become part of the IMOCA Globe Series Championship from 2021. “It is down to us to help this event grow to make it a must for as many boats as possible. We have already started working with the organisers with that in mind,”Antoine Mermod said to conclude.

*In the order they finished in the 48-hour race.

Jean-Marie Corteville, founder of Azimut, the Lorient-based company that specialises in digital solutions and which organises the Défi Azimut
“This brings to an end a magnificent tenth edition. Each year, there is more to the event and it is now action packed. Becoming part of the IMOCA Globe Series programme of events from 2021 is the ultimate accolade. The concept of the Azimut Challenge will remain the same, but we will be taking a step up. We are working towards improving our organisation and how we welcome people. We will do our utmost to get more coverage for the event and to develop it internationally.”

Armel Tripon (L'Occitane en Provence), winner of the speed runs
“We came here to do battle and understand the situation, which is exactly what we have achieved in all sorts of points of sail and strengths of wind. We were able to see that the boat isn’t lacking anywhere in speed and that I was up there in general, so it has all been very positive. It’s great to be able to say that we have a boat that is fast, but it is only when you see how you measure up against others that you can really be sure of that. This event has put us in a good position in terms of racing before the Vendée Globe. Just in terms of where to position ourselves and which trajectory to take. I haven’t raced for a while and you forget things very easily. It was an event that we simply could not miss.”

Kevin Escoffier (PRB), winner of the race around the island of Groix
“We got off to a fantastic start. Conditions were really ideal today with winds between five and twelve knots. A bit of wind and plenty of sunshine… It was more like racing around Antigua that sailing around Groix. We should call it the Antigroix race seeing we did it anti-clockwise (laughs). We gave it our all. That gave us a boost, because on Saturday I got punished at the finish of the 48-hour race. Obviously, it’s always nice to win, as you try to give it your best each time. It is encouraging and has shown our rivals that we need to be taken seriously. We are up there and we haven’t broken anything. There is a month and a half left for us to get ready now for the start of the Vendée Globe.”