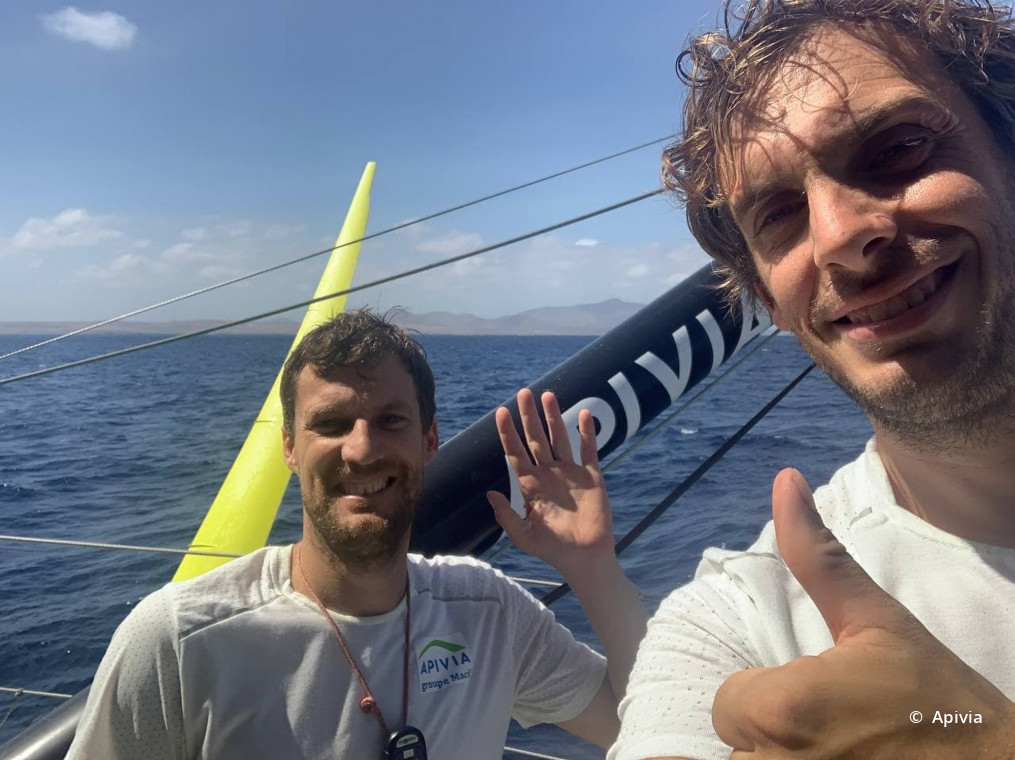 It is easy to forget, when following the racing in the IMOCA Class, that it is not all about stress and worry and that probably the main reason why skippers choose to take on long trans-oceanic races is because they love their boats and they love the sea.

We were all reminded of this when watching one of the latest videos from on board during this Transat Jacques Vabre, featuring race leaders Thomas Ruyant and Morgan Lagravière laughing and playing together as they belatedly celebrated crossing the Equator on board LinkedOut.

The two Frenchmen, who have dominated the middle part of this 5,800-nautical mile race, and are now leading the charge from Fernando de Noronha to the finish at Martinique, had been so focused on building speed after exiting the Doldrums that they completely failed to notice that they had crossed the line that delineates the northern and southern hemispheres.

Cue a great celebration as Ruyant “toasted” his flying machine with rum from a flask and both skippers enjoyed a slug, as the boat flew towards the turning mark off the Brazilian coast. Team manager Marcus Hutchinson says the fact that they missed the famous crossing point tells us all we need to know about the intensity of the race at the front of the IMOCA fleet, as the LinkedOut crew chase their first big win in this boat.

“They are having a laugh on board,” he said, “but the significant thing is they missed the Equator because they were focusing so much on accelerating out of the Doldrums. The balance between full technical concentration and the ability to tell a story has been wonderfully met with that bit of film.”

The Doldrums were always a major factor in this race, but LinkedOut, which has led since the Cape Verde Islands, managed to get through them chased by Charlie Dalin and Paul Meilhat’s APIVIA and Jérémie Beyou and Christopher Pratt’s Charal without too much delay. The crossing point was much further east than normal, but the leaders found a corridor with no big shutdowns.

While Ruyant and Lagravière saw their advantage cut from 70 miles to 30, behind them APIVIA via and Charal were locked in an intense battle often within sight of each other. Today as the top-three go downwind in the southeast trades along the South American exclusion zone – designed to keep the boats away from unlit fishing boats – Dalin and Meilhat have managed to build a 50-mile cushion over Charal as they chase LinkedOut, 30 miles ahead of them.

After nearly 13 days at sea, there is still more than 1,800 miles to go for LinkedOut and the last days of this absorbing contest are not going to be straightforward. The Doldrums have to be crossed again and then there is a final section in the northeast trades that look poorly established as the boats close on the finish at Fort de France.

On APIVIA, Dalin was relieved to get through the Doldrums without too much fuss and was enjoying the fast ride to Fernando and then back up towards the Equator. “We’re really into it with Paul,” he said referring to co-skipper Meilhat. “We’re highly motivated – it’s still going very well on board. We’re a little tired from the Doldrums and the start of the race, but that’s normal. We knew that and now we’re taking advantage to recover well on this stretch, to be in shape for the last (not) straight line.”

The first seven boats are currently spread over nearly 605 miles with Corum L’Épargne the backmarker of this group and still paying a heavy price for being caught out in the windless conditions off the Brittany coast two weeks ago. Up in fourth place, Sébastien Simon and Yann Elies on the Juan K-designed sistership to CORUM L’Épargne, – ARKEA PAPREC – the mood is defiant.

They may be 350 miles behind LinkedOut, but they have not given up hope of cutting the deficit. “On the whole we didn’t have any stops and that’s pretty positive,” said Simon of his Doldrums crossing. “We didn’t break anything and we managed to get through without losing any time. What made the difference between the leading group and us was in the period before the pot au noir in the trade winds where they had more and more wind. I hope we can catch up with the leading trio,” he added, “we’ll stay close and take every opportunity.”

Behind the top-seven there is an intense battle between the boats ranked eight – Fortinet-Best Western, co-skippered by Romain Attanasio and Sébastien Marsset (+703 on the leader) – and 11, Nexans-Art & Fenêtres sailed by Fabrice Amedeo and Loïs Berrehar (+729). In between them is Vendée Globe winner Yannick Bestaven sailing with Jean-Marie Dauris on Maître CoQ IV and Giancarlo Pedote and Martin Le Pape on Prysmian Group.

Attanasio says he and Marsset have had no problems on board the former Malizia Yacht Club de Monaco raced by Boris Herrmann in the Vendée Globe. “Our sails are fine,”said the irrepressible Attanasio, “I had the good fortune to order three new ones before the race – the main spinnaker, the J0 and the J3 – and these are the three sails that we have on duty constantly. So it’s perfect and the boat is great, my technical team did a great job.”

He says he and Marsset are still learning their boat – trying to get the most out of it in different modes. “We have sailed a lot since launch, but obviously we can’t compete with some of our competitors who have had the same IMOCA for several years and who did the Vendée Globe with it,”Attanasio explained. “We are the only ones – except Pascal Bidégorry (co-skipper on 11th Hour Racing Team-Mālama/sixth place +532) but Pascal is an ‘extra-terrestrial’ – who have had our boat for such a short time. There was the other 11th Hour and Bureau Vallée too but they are no longer racing."

“We are still not finding the right controls and the transitions are taking longer which is not the case with the others. On Maître CoQ IV, Yannick knows his boat by heart – he won the Vendée Globe in it – and he never has a slack moment, whereas it happens too much to us.”

Attanasio says he is determined to try to maintain his slender lead in this middle group as they head towards the mark at Fernando de Noronha. “We were hoping to be in the front group but we are not,”he said. “Now we are going to try to be in the front of this group; we are going to do everything for it, we are not going to give up anything. We are going straight to Fernando – there are a lot of squalls but also wind, so it’s good. Depending on the squalls we can either make eight knots or 30 knots – there are currently 14 knots of wind and Fortinet-Best Western is at 21 knots, so it’s not bad.”

“There is still a long way to go,” he added, “we will have to go through the Doldrums again, which is never easy and then again a succession of gybes along the exclusion zone. The race is far from over and we are very happy to still have our spinnaker in good condition.”

Attanasio saved his last word for his partner Samantha Davies who has been enjoying an excellent final race on Initiatives-Coeur alongside Nico Lunven. They are currently in fifth pace and locked in a tight battle with Arkéa Paprec, 240 miles northeast of Fernando and more than 300 miles ahead of Fortinet-Best Western.

“They have been sailing very well,”said Attanasio. “The boat has been very fast in light air. They are fine strategists; I can only encourage them and congratulate them for a beautiful last race while Sam awaits her new boat.”