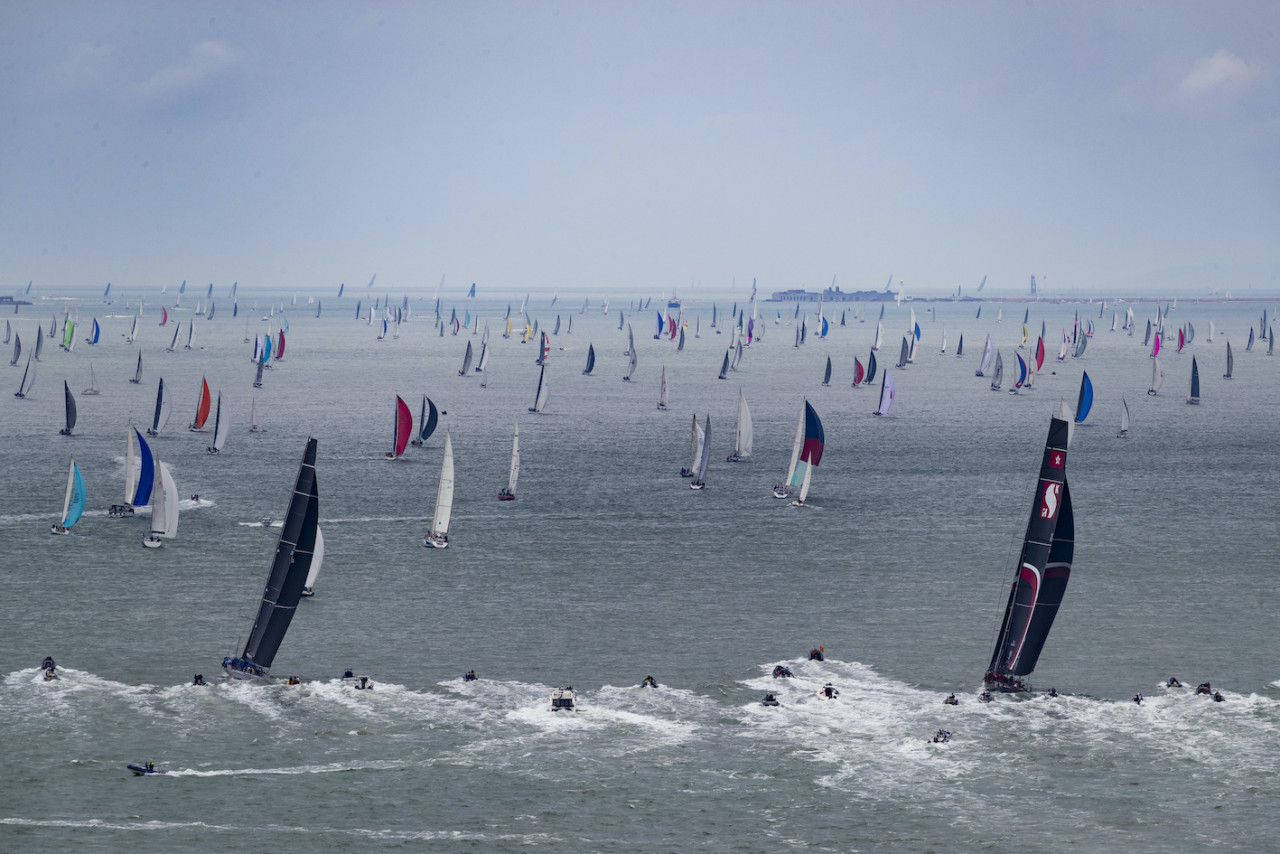 The 49th edition of this historic biennial race which starts from the Solent on Sunday, is not just a great opportunity for two-handed IMOCA crews to battle against each other, it has also been designated an official qualifier for this autumn’s Transat Jacques Vabre (TJV).

Also on the startline will be the 2021 Vendée Globe winner Yannick Bestaven on board Maitre CoQ IV who is tackling the race alongside the 57-year-old legend Roland “Bilou” Jourdain.

This year’s Fastnet is unique in that, for the first time in it’s history, the Royal Ocean Racing Club, has changed the course of its most famous race. Instead of finishing at Plymouth after rounding the iconic Fastnet Rock off the southwest corner or Ireland, the fleet will head this time to Cherbourg.

This lengthens the traditional 601-nautical mile course by 15%, to 695 miles and introduces new challenges in the final stretch. Among them are crossing the Channel and the shipping lanes, dealing with the Casquets Traffic Separation Scheme and the Alderney Race and, finally, tackling the approach to the finish off Cherbourg that just might see the fleet battling light airs and heavy current.

Jérémie Beyou, the skipper of Charal, is the defending IMOCA Fastnet champion, having won the last edition in the IMOCA Class in 2019. He loves this famous classic that will feature more than 350 boats in 13 classes, even if it usually involves a long beat down the Channel to Land’s End. “For us, we will enjoy coming back to this race,” he said on behalf of himself and his co-skipper Christopher Pratt.

“It’s a race I really like because I am used to racing in the Figaro and I am used to this type of race,” he added. “For sure, for one last time, we are looking forward to the future again. We know it will be hard and the English coast is always quite tricky and finishing in Cherbourg this time will make it even more tricky I guess.”

Sam Davies the English skipper of Initiatives-Coeur will be racing for the first time with her old friend and rival Nico Lunven with whom she is teaming up for the Transat Jacques Vabre. Davies is also a big fan of this old classic race and she is looking forward to bringing her well-travelled IMOCA to English waters.

“The Fastnet is a really well known race – just like the Sydney-Hobart and it’s a great fun course,” she said. “I think the timing is good as well for the IMOCAs because it is a useful race to use as a warm-up for the Transat Jacques Vabre and it is always run the same year as the double-handed season in the IMOCA Class.”

Davies knows a bit about the new course to the finish, having raced from the Fastnet Rock back to Cherbourg when winning the Drheam Cup in 2018. “I do remember hammering across the Irish Sea and then a really tricky race up the Channel in very light winds,” she recalled. “I was miles ahead going round the Rock, but then three of us ended up parking in the Alderney Race in no wind.

“So there are more difficulties and opportunities added to the race now and it is going to keep us on our toes for longer and make it even more exhausting,” she added.

Another Fastnet veteran is Fabien Delahaye, the 37-year-old from Normandy who has sailed the race three times already, including winning it in Class 40s in 2013. This time he is sailing on board MACSF with Isabelle Joschke, another partnership that has been hard at work preparing and training for the TJV.

“I think we are ready now to go to the Fastnet with Isabelle and for sure it is a good training race for us,” he said. “We don’t have the full set of new sails yet that we will have for the Transat Jacques Vabre, but the race will be good training for us, for manoeuvres, to work on strategy together and also to race with other boats in the IMOCA Class.”

Beyou says the Fastnet will be a useful pointer as to how boats are comparing against each other as the new IMOCA Globe Series gets underway. Charal, for example, has some new sails but Beyou’s team has also modified the bow section, adding a AC75-style “bustle” to help the hull ride over the waves as she comes off the foils.

“Depending on the weather conditions, the Fastnet will be an important test, comparing with the other boats while racing,” he said. “So it is an important moment for us before the Transat Jacques Vabre. If things don’t go well, we have time to make changes so it is a good time to go racing.”

Davies, meanwhile, is dreading a classic opening to the race with a beat down the Solent into the southwesterly breeze. She’s hoping for easterlies! “We were out training the last two days, practising our tacks,” she said laughing. “My worst nightmare in the Fastnet race in a foiling IMOCA is double-handed tacking out of the Solent – having to do all those manoeuvres.”

For Beyou the race is a personal milestone, as it marks his return to competition for the first time since the Vendée Globe. For him, the global race was a particularly difficult experience as he re-started and then completed the course following damage to Charal in the early stages.

“It has taken a lot of time to recover,” he said. “I have to be honest about it – and I am still tired sometimes – but I am really motivated and really keen to come back to competition. It’s good to have a short one to get back into it.”

Delahaye is also keen to get going after some intensive training on MACSF. “We are more ready now than at the beginning of June to go racing together,” he said. “I am really happy to sail with Isabelle – our partnership works well and I am happy to sail on this boat with her. I think the lights are green to go offshore.”