The IMOCA skippers are committed to a sustainable future 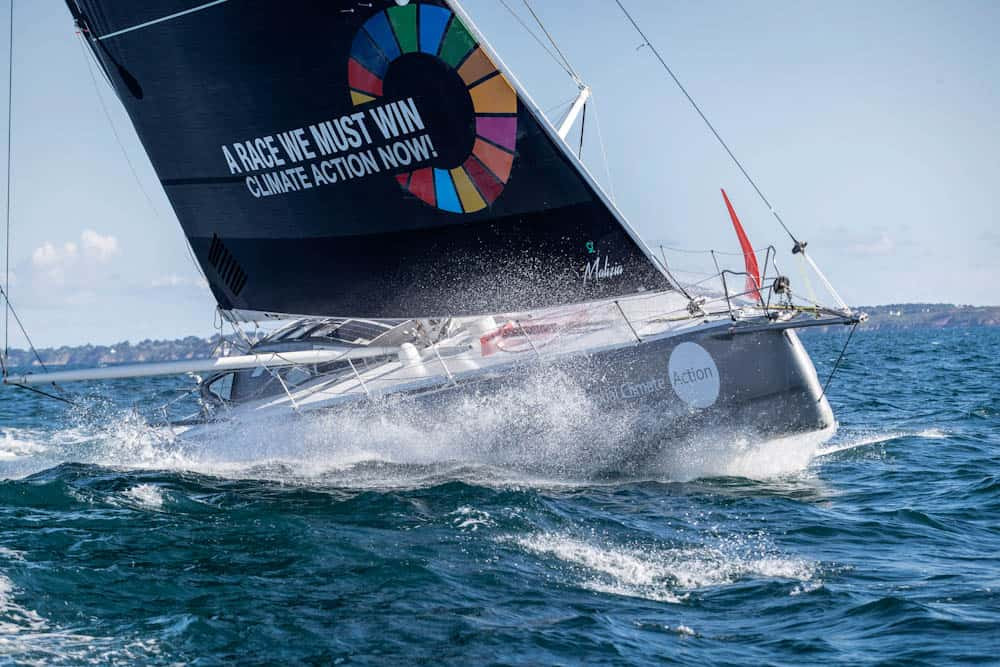 A key supporter of the call for the Ocean to be seen as a common good for mankind and signatory of the "Sports For Climate Action" memorandum, the IMOCA class has also set up its own Programme for the Oceans, suggesting concrete measures, which can easily be carried out and which involve as many people as possible.

“Programme for the Oceans”: an action plan with four themes

Sailors were among the first to witness the global impact of man on this vital, yet fragile environment. It is no longer the moment to sit back and analyse the situation as now it is time to do something about it.

That is why the IMOCA class has set up the Programme for the Oceans, which aims to reduce the impact of the boats and to spread a positive message to encourage people to act. The action plan they have drawn up is based around four themes (events, ecological transition, making people aware of the matter and sciences).

The IMOCA continues to support the Ocean As Common programme

The IMOCA class was one of the first signatories of the call for the Ocean to be seen as a common good for mankind, which was launched on 8th June 2018 during the Monaco Globe Series. To make this partnership official, the class signed a patronage agreement a year later with Ocean As Common, in order to support its message and to work alongside it at IMOCA events.

The class has signed the UN Sports For Climate Action charter

The IMOCA is one of the sporting organisations that have joined a new movement in the world of sport in favour of protecting the climate. Signatories to the Sports For Climate Action charter are committed to respecting a set of five principles and including them in their strategies.

The German skipper, Boris Herrmann is deeply concerned about environmental matters and is currently crossing the Atlantic Ocean with the young activist, Greta Thunberg, who is due to take part in a world climate summit in New York. This trip is being carried out aboard Boris’s IMOCA, Malizia II, a boat that produces all of its energy using solar panels and a hydrogenerator. “Mankind is in a race against the clock to make significant reductions in CO2 emissions,” declared the sailor. “That means changing everything, starting with the world’s economy, which is almost entirely based on fossil fuels. This trip shows it is not easy to replace fossil fuels, but that it is possible. Everyone can start to make changes in their own life. If we individually make small changes, it can in the end change everything. But we need those changes and these measures have to be taken now.”

Paul Meilhat, Stéphane Le Diraison, Alexia Barrier, Louis Burton and Benjamin Dutreux are among the most committed skippers. Paul Meilhat is in particular at the vanguard of these environmental measures as ambassador for the Surfrider Foundation Europe, which just organised the Ocean Pavilion in Biarritz (from 20thto 23rd August). During these four days, more than eighty committed people from around the world came together before the G7 summit in Biarritz, with the aim of including the preservation of the ocean in the international political talks. These discussions resulted in the Ocean Call, an official declaration promising concrete measures in favour of the Ocean. This document was given to key G7 representatives. “I attended the opening of the Ocean Pavilion and in particular, explained the measures we are taking with the IMOCA and more generally how sport can be an impetus in this fight,” explained Paul Meilhat. “For me, it was also an opportunity to meet some interesting people and see what was going on in other sports and what we can maybe apply to the IMOCA class. We are all capable of making changes and in every area. Big things can happen when we are motivated, bold and positive.”

Stéphane Le Diraison is also heavily involved. With Time For Oceans, he has alerted everyone to the fact that preserving the oceans is something that needs to involve a wide range of people including public bodies, businesses and citizens. “Within the team, we are very strict about managing our environmental impact,” stressed Stéphane. “We are well aware that a carbon boat has a large environmental footprint. Among the changes coming up for our IMOCA, we are obsessed by the idea of reusing as many parts and materials as possible. We start out from what already exists to carry out our development.”

Alexia Barrier’s 4myplanet project aims to contribute to scientific and technological research involving environmental issues. In particular, Alexia is making available an educational kit about the oceans (for children from 6 to 16) during the Transat Jacques Vabre. “This educational kit has been translated into four languages. The teaching programme is being followed in five countries by more than 15,000 children in primary and secondary schools and in charities working with underprivileged children,” explained the sailor.

Louis Burton is also making an educational kit available for the Transat Jacques Vabre. “With this tool, I wanted to make children from the age of six aware of these environmental matters by allowing them to discover our ocean world,” explained the skipper of Bureau Vallée 2. The educational packs made available by Louis Burton and Alexia Barrier can be found on the IMOCA website.

Benjamin Dutreux is also committed to sustainability. Since he started out in ocean racing in 2015, Benjamin has used his racing boats as an educational platform to make children aware of the importance of protecting the oceans around the planet. “As sailors, we are the first to see the damage linked to pollution and climate change,” he stated. “I want to give meaning to my IMOCA project by working with associations and firms, who wish to show their commitment, by applying concrete measures and sharing the same values. This three-pronged approach will be at the heart of my project.” The skipper from Vendée will give more details of his commitments in the coming days.

As for Fabrice Amedeo, he has fitted a new protective cover, which can be equipped with two huge solar panels offering 630 watts of power in sunny conditions and 14 Amps. "With the autopilot, the computer and console, my consumption when racing is 14 Amps. That means in sunny weather, my panels cover more than my overall consumption and will even enable me to recharge the batteries aboard my boat,” explained theskipper of Newrest-Art & Fenêtres.

Some dates for your diary:

- Genoa, 20th September: The Ocean Summit #1: The Ocean Race (the crewed round the world race with stopovers) is launching a series of eleven summits called The Ocean Race Summits. These will bring together various leaders and influential figures from the world of sport, sustainable development, politics, business, universities and sciences with the goal of taking concrete measures to restore the health of our oceans. The first summit is due to be held in Genoa on 20th September.

The Transat Jacques Vabre with its fifteen eco-friendly commitments: The environmental action plan for the race will be announced shortly.

- The Programme for the Oceans (Imoca):
https://www.imoca.org/en/commitments/oceans-programme

30.11Kevin Escoffier (PRB) activates dis…Kevin Escoffier, 40, who is racing in th…29.11Nick Moloney: Don’t walk away AlexOne can only imagine the conflicting emo…25.11Damage to the port foil of Thomas R…While lying in second place in the South…23.11Alex Thomson shows us the damage to…In this video just landed Alex Thomson t…22.11Log from Sam Davies in the DoldrumsThis morning there were some magnificent…20.11The best is yet to come from HUGO B…When you are the performance manager for…
All news and videos
News

Kevin Escoffier, 40, who is racing in third place in the Vendée Globe solo non-stop around the world race, positioned some 550 nautical miles SW of Cape Town, has triggered his distress beacon. Kevin Escoffier (PRB) Acti…

Plankton, concentrated life in a single drop of water

Our Vendée Globe heroes perfectly understand the wind, waves, sea currents and climates of the earth. They remind us that our planet is small, blue, and that the ocean is a common good for humanity. But what they sometim…