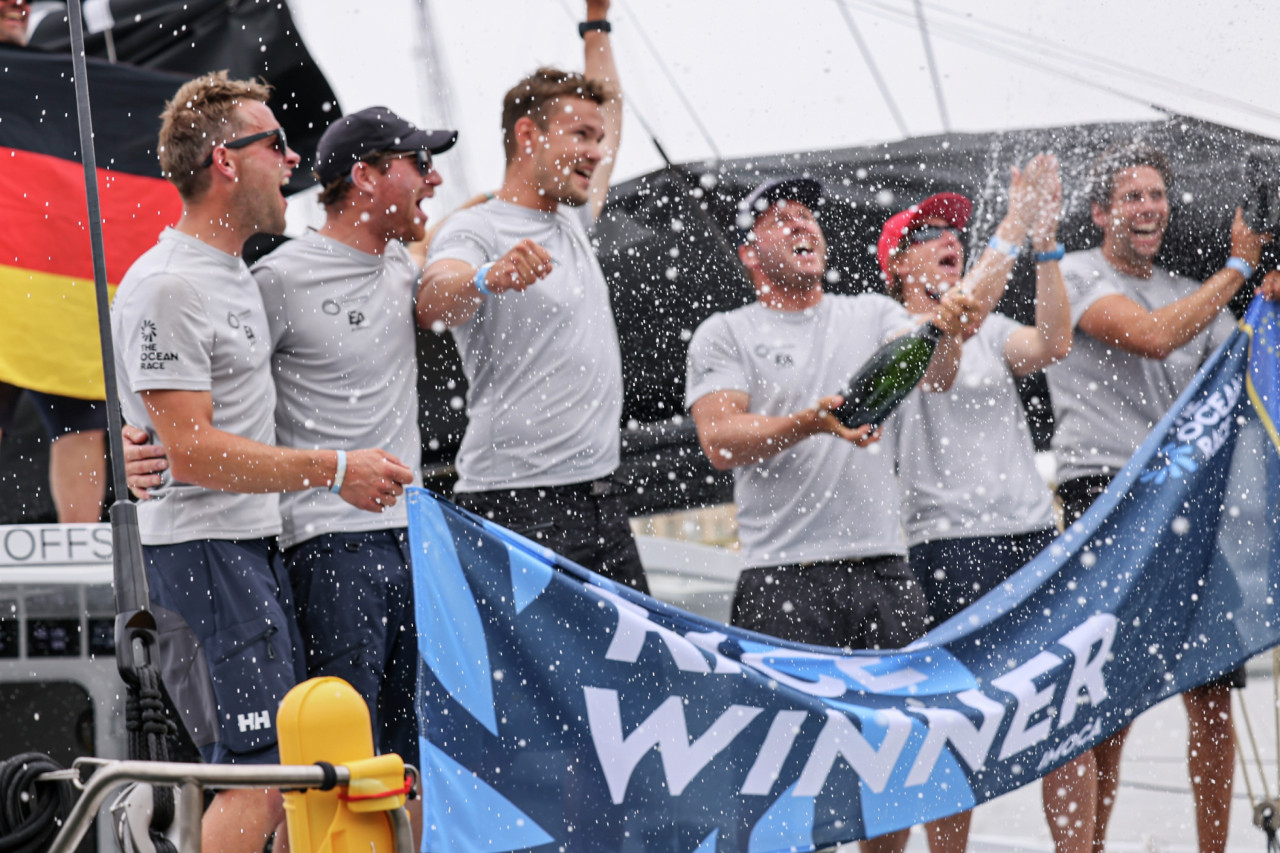 It came down to the final run as the two IMOCAs – LinkedOut with foils, Offshore Team Germany with daggerboards – slowly converged on starboard tack. And it was the German crew led by Robert Stanjek that crossed the line ahead – by no more than a few metres.

It meant Stanjek’s crew emerged triumphant after a contest of three offshore legs and two coastal races in which the German former Olympic Star sailor and his team, which includes the Vendée Globe skipper Benjamin Dutreux, had maximised the benefits of their daggerboard configuration.

Even so, the final podium could hardly have been expected with the oldest boat in the five-strong IMOCA fleet – first launched in 2011 as Acciona – sitting at the top with 16 points, followed by 11th Hour Racing Team a point behind and then LinkedOut a further point back in third. Nicolas Troussel and his crew on board CORUM L’Épargne finished fourth overall with seven points, with Louis Burton and the team on Bureau Vallée 3 fifth, on five points.

Befitting an event which has seen its fair share of light airs since the start from Lorient on May 29, the final coastal race got going in a light sea breeze with an opening reaching leg in which Offshore Team Germany quickly established a clear lead. Stanjek and his crew then held onto the initiative upwind on leg two and looked to have the matter all sown up at the final mark, until a problem furling their headsail allowed Enright and his team to sneak inside.

That set up a thrilling final run to the finish that a delighted Stanjek compared to elite inshore racing. “It was like an Olympic medal race; there was a lot of pressure today in a very short race when we had to perform,”said the German sailor who went into the final contest at the top of the leaderboard, but could so easily have finished third overall.

“We had to beat one boat on the water and we were only allowed to get one boat in between 11th Hour Racing Team and us,”he added. “So there was a lot of pressure and, of course, the wind was light so it was not always easy but yeah, we managed it – just. I think in the end it was by 10 metres, so it ended up in a match racing situation. But we won overall which is super – it’s great. I am very happy.”

Enright had done all he could to clinch The Ocean Race Europe title by winning this final race, but then he and his crew had to watch as LinkedOut was squeezed at the death by Stanjek on the helm of Offshore Team Germany. “It was tough to spectate at the end,” the American skipper said. “We had convinced ourselves that there was a chance and not having it all come together was a little tough. But we definitely took solace from the fact that we did everything we could today which was the goal.”

Ruyant, meanwhile, was naturally deflated about having finished third overall after an event in which the LinkedOut team, that includes the new female solo round-the-world record-holder Clarisse Crémer, was always in with a chance of overall glory. “We had a pretty incredible race with Offshore Team Germany and 11th Hour Racing Team that was decided on the finish line, in the last downwind leg,” he said. “Everything could have been turned upside down in terms of the ranking but we finished third, so obviously I’m disappointed.”

The Ocean Race Europe has certainly broken new ground with fully-crewed IMOCAs for the first time racing alongside a seven-strong fleet of VO65s (the winner overall in that class being Mirpuri Foundation Racing Team, skippered by Frenchman Yoann Richomme). While the weather did not always suit the latest foiling designs, the format produced intense racing which pushed sailors to the limits.

Antoine Mermod, President of the IMOCA Class, said he is very happy with the way the event has gone and believes it has been an effective showcase for the participation of IMOCA yachts in next year’s Ocean Race around the world. “For the first time we raced together on the same course as the VO65s and it was very nice to see that it works quite well,” he said.

Mermod says the feedback he has been getting from skippers and crews is that they have all learned a great deal about their boats as a result of racing fully-crewed and pushing their IMOCAs harder than they would single or double-handed. While some people were no doubt frustrated by the amount of upwind sailing in light airs that the weather gods served up, Mermod points out that the run down the Portuguese coast at the start of leg 2 saw the leading two IMOCAs – 11th Hour Racing Team and LinkedOut – flying along at 25-30 knots and on course for what would be a new distance record for the class of 600 miles in a day.

“The sailors have learned a lot about their boats and about how to sail them with a full crew and this will help them when they return to short-handed racing,”said Mermod. “IMOCA sailing is about designing boats, racing them and making them reliable and, with crew, we are learning a lot and we are improving a lot. The more you do, the more you learn and more you improve. What we have also seen is that especially with crew there are less limits on performance – you can push more and skippers are developing a way of sailing that is impossible to achieve as a single-hander.”

Ruyant is looking forward to the next Ocean Race Europe in four years time. “I like solo sailing and my big challenge is the Vendée Globe, but the Ocean Race Europe has allowed me to discover other ways of sailing,” he said. “I had to adapt the crew. Now LinkedOut is quite well adapted to this exercise with a cockpit large enough to organise life on board. It’s another organisation, another way of doing things and I will remember the stopovers and meeting people from other cultures – Anglo-Saxons, Italians – and also the VO65s that are with us. We have discovered a lot of sailors and there have been a lot of people on the pontoons, which is a very nice thing.”