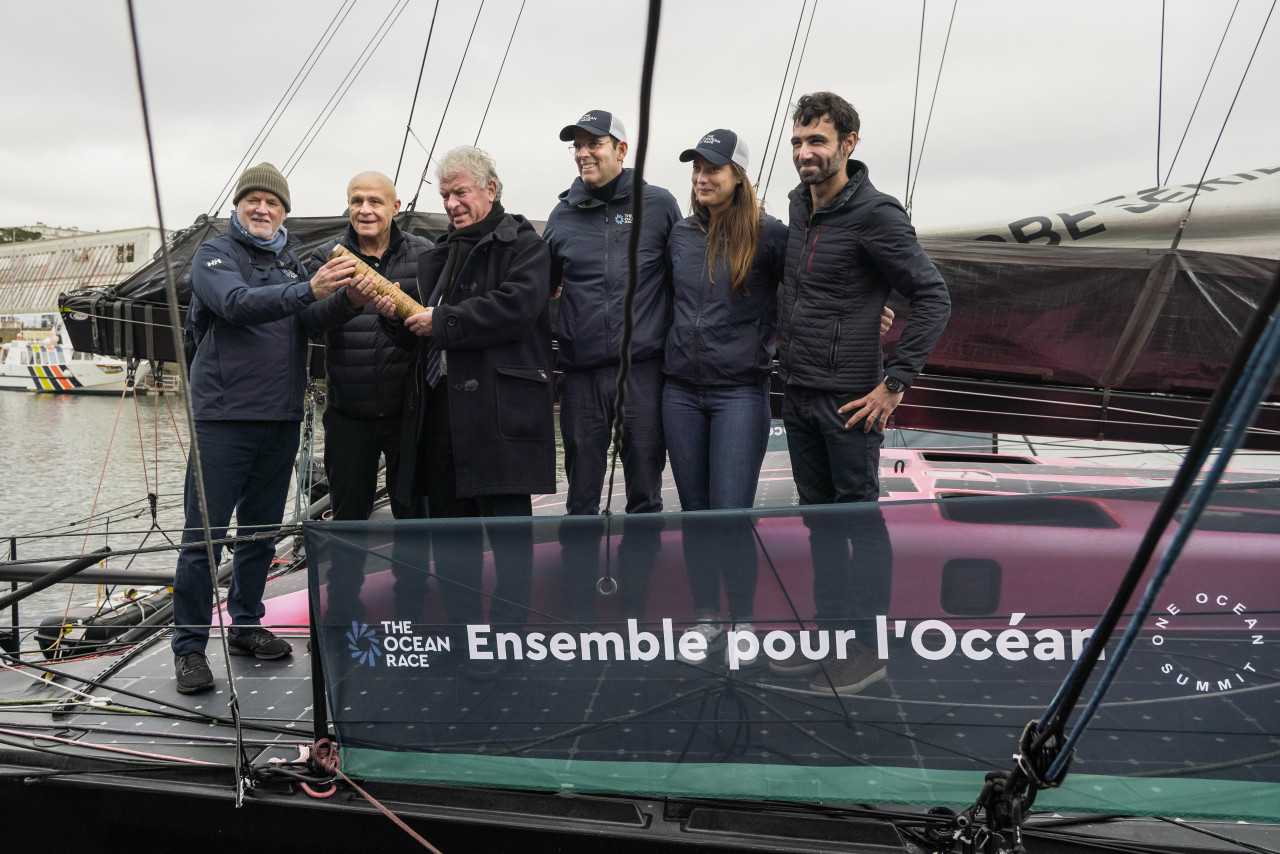 Relay4Nature, an initiative that highlights the inseparable connectivity of the issues affecting the planet and the solutions that are needed, arrived in Brest, Brittany, this afternoon ahead of the milestone event.

Nature’s Baton, the symbol of Relay4Nature, has sailed into Brest, where it was welcomed to the One Ocean Summit by the Mayor of Brest François Cuillandre and Special Envoy of the President of the French Republic, Olivier Poivre d'Arvor.

Skipper Alan Roura, a two-time competitor in the Vendée Globe, and Olympian Aloïse Retornaz, who took Bronze in the Women's 470 class at the Tokyo Games in 2021, sailed the Baton to Brest from Lorient on Roura’s latest generation of an IMOCA 60 boat, accompanied by UN Secretary-General’s Special Envoy for the Ocean, Peter Thomson and Race Chairman of The Ocean Race Richard Brisius.

Relay4Nature, The Ocean Race’s initiative developed in collaboration with Ambassador Thomson, helps to give the ocean a voice on the critical issues affecting our planet and connect the major events where decisions are made about the environment.

Starting on Wednesday 9th February, the One Ocean Summit, by the French Presidency of the Council of the European Union, with the support of the United Nations, aims to increase international action for the ocean and drive tangible commitments and is an opportunity to kick-off the second year of the Ocean Decade.

Race Chairman of The Ocean Race Richard Brisius said: “It is fitting that France has organised this milestone event for the ocean, as it is a nation with a rich maritime history that has produced some of the world’s top sailors, including several skippers that have won The Ocean Race.

“We are delighted to bring Relay4Nature back to France for the One Ocean Summit, after it featured at the IUCN World Conservation Congress in September. By bringing together the platform of our event, the voices of sailors and landmark conferences we can raise awareness of the critical issues affecting the ocean and help to accelerate action.”

The Ocean Race has a strong connection with France, with the 2011-12 and 2017-18 editions of the Race won by French skippers - Franck Cammas and Charles Caudrelier - while French offshore legend Éric Tabarly, often known as the father of French sailing, has competed in the Race five times, including the first edition in 1973-74, when France had more entries than any other nation. Last year, the inaugural edition of The Ocean Race Europe started in Lorient, Brittany and included the high-performance foiling IMOCA 60 class, which is headquartered in France, for the first time. The class, which also competes in offshore short-handed races such as the Vendée Globe, will be back for the next edition of The Ocean Race at the start in January 2023 with a full crew onboard.

Special Envoy of the President of the French Republic for the One Ocean Summit, Olivier Poivre d'Arvor said: “As the holder of the Presidency of the Council of the European Union, France is delighted to receive Nature’s Baton from Ambassador Peter Thomson here in Brest ahead of the One Ocean Summit. The baton helps to raise awareness of the effects of major issues like climate change, biodiversity loss and the need for ocean protection. France is taking the Relay4Nature baton from COP26 in Glasgow with a strong sense of its responsibility for our common good.”

Nature’s Baton will be on display throughout the One Ocean Summit, gathering messagings from a range of ocean advocates about the action that they want world leaders to take to safeguard our seas.

UN Secretary-General’s Special Envoy for the Ocean Peter Thomson said: “Nature’s Baton has arrived in the port of Brest, beginning an epic 2022 journey linking the environmental, biodiversity, climate and ocean conferences. 2022 is the year we can stop the decline of the ocean’s health and Nature’s Baton will remind us all that this is possible and that we are all connected in meeting this challenge.”

Skipper Alan Roura said: “I’ve been sailing for 27 years now, first with my family and most recently as a professional sailor around the world and I’ve seen changes to the weather conditions, such as lack of trade winds at the usual seasons, and kelp north of the Azores that we never used to see, not to mention the vast amount of plastic. It’s not too late to do something about this but we need to do it quickly. I’m really proud to be here in Brest with my boat and my team and to bring the baton so people understand that we need to put in place actions to protect the oceans”.

Mayor of Brest and Chairman of Brest Metropole François Cuillandre said: “Hosting the One Ocean Summit is of great pride for Brest and for our region. It is a great recognition of all the efforts of our maritime ecosystem, companies, industries, researchers and supporters of the sea. We all know the challenges ahead, particularly with regard to marine pollution and global warming. I hope that this summit will be useful for the enhancement and protection of the ocean and we welcome the many positive initiatives taking place in Brest, such as Relay4Nature by The Ocean Race and Peter Thomson, to help make the voice of the ocean heard”.

Olympic medallist Aloïse Retornaz said: “As a professional sailor I’m particularly sensitive towards the protection of the ocean. I think we can expect some key decisions here in Brest this week that will help to shape the future. We all need to make changes in our own lives to reduce our impact, such as finding ways to cut our carbon footprint when travelling and minimising the use of single-use plastics. I’m incredibly happy to be here in my hometown where the One Ocean Summit takes place”.

Last year Relay4Nature featured on the world stage at the IUCN World Conservation Congress in Marseille and United Nations Climate Change Conference (COP26) in Glasgow. Nature’s Baton also had a leading role in The Ocean Race Europe, with alternating teams taking the baton for each leg, before handing it to local dignitaries and ocean advocates in the stopover cities. Along the way the baton has collected messages from influential voices, including HSH Prince Albert of Monaco, European Commissioner for Environment, Oceans and Fisheries, Virginijus Sinkevičius, Co-Chair of Friends of Ocean Action and former Deputy Prime Minister of Sweden, Isabella Lövin and Director General of WWF, Marco Lambertini.

Relay4Nature is part of The Ocean Race’s multi-award winning ‘Racing with Purpose’ sustainability programme, which brings together a range of tangible ways that we can have a positive impact on the marine environment. Working with 11th Hour Racing - the Founding Partner of the Racing with Purpose programme and a Premier Partner of The Ocean Race, The Ocean Race is holding high-level summits to drive global decision-makers to create policies to protect and govern the ocean, contributing vital data about the state of the seas to leading scientific organisations, equipping children with the knowledge to help the ocean and much more.