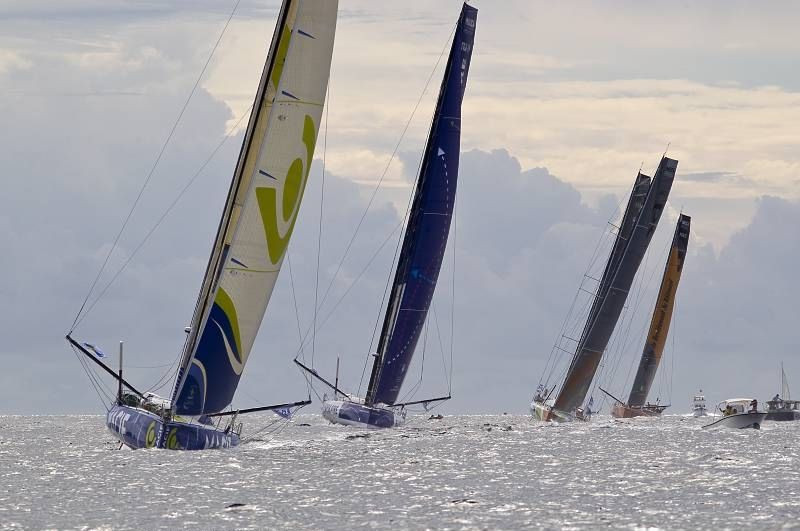 On Tuesday 20th December, the last of those Transat B to B skippers making for the finish port of Lorient arrived safe and sound after an extraordinary, wintry, eastbound transatlantic race. Race Management counted 8 out and counted 8 back...
Crossing the virtual finish off northern Spain some days ago, seventh placed Louis Burton on Bureau Vallée was the first to make landfall in Lorient at around 0500 UTC greeted by his newborn son, Lino. Louis’ arrival here is a fantastic achievement after he came close to dismasting some days ago and has since been making headway with a heavily lashed staysail stay attachment. “It’s hard! These Imocas are almighty machines! The physical effort required to drive them is intense! Sometimes you stand by the windward runner and you just watch the boat slipping along… it’s brilliant!! She devours the miles.”

All smiles in the half light, sixth placed Jean-Pierre Dick (Virbac Paprec 3) rounded off the arrivals in this Back to Brittany race with his arrival in Lorient at 0700 UTC. Taking the courageous decision to dip out of his very northerly option and head a long way down to the south-east to make a nearly 30m climb up his mast to release his gennaker hook and hence his partly unfurled downwind sail, Jean-Pierre really captured the true essence of the Transat B to B… training for the Vendée Globe 2012 in race format.