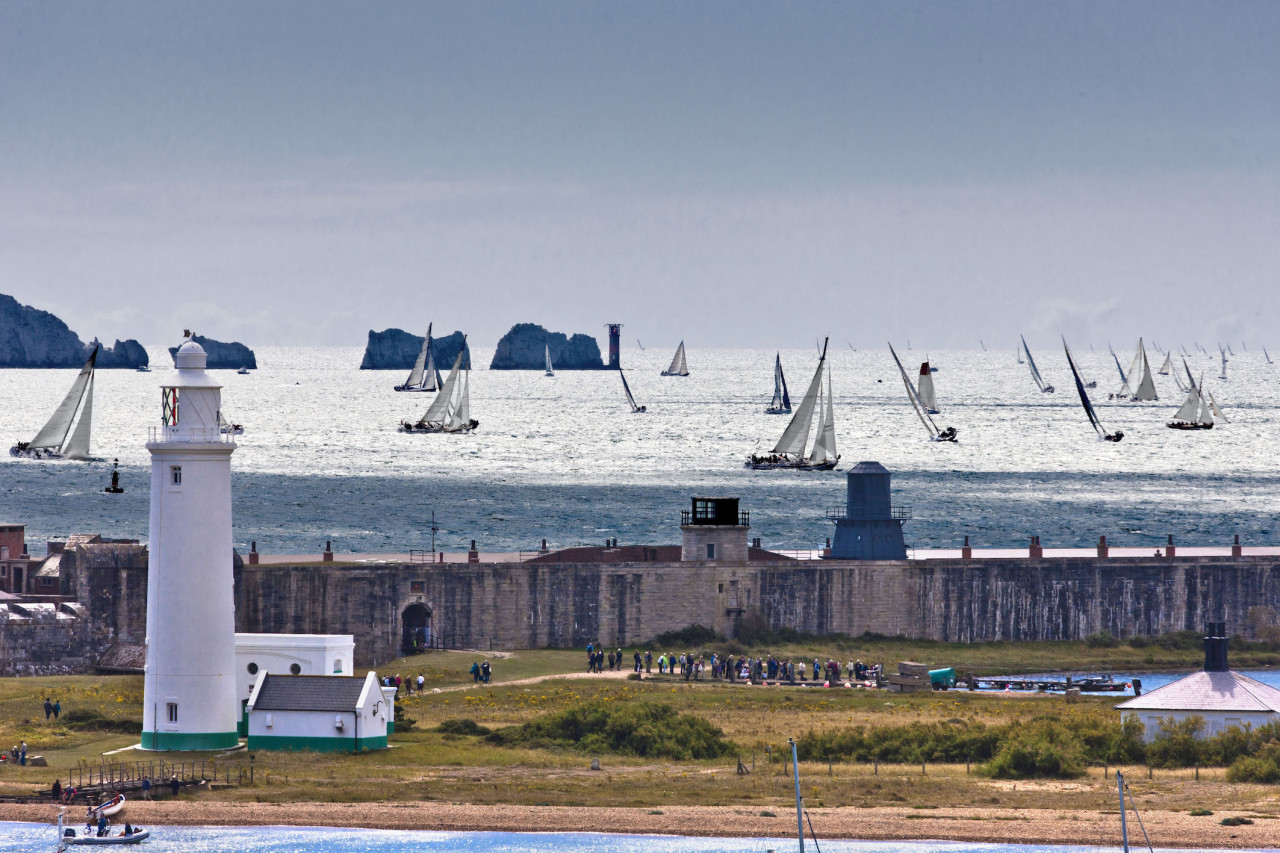 The 2019 Rolex Fastnet Race start will bring together no fewer than twenty IMOCA monohulls on Saturday 3rd August (including eleven foilers) at the start from Cowes (Isle of Wight) at 12h45 (UK) with the finish in Plymouth (SW England) after sailing via the Fastnet Rock (Ireland).

The 605-nautical mile course is likely to be sailed in fairly light winds according to the latest weather forecasts. It is an opportunity for the IMOCA skippers to train sailing double-handed with three months to go to the start of the Transat Jacques Vabre and fifteen months before the Vendée Globe.

The 2019 edition will also be an opportunity to discover Sébastien Simon’s new ARKEA-PAPREC IMOCA, which was recently launched. Everyone has been looking forward to the battle against the other foilers. We take a look at who is lining up for this 48th edition of the Rolex Fastnet Race, the IMOCA reference time for which (2 days, 16 hours, 14 minutes and 2 seconds) has been held since 2017 by Paul Meilhat and Gwénolé Gahinet on SMA.

Eleven foliers including two from the latest generation

The brand new IMOCA, Arkéa-Paprec, designed by Juan Kouyoumdjian, will be skippered by Sébastien Simon and Vincent Riou (winner of the Rolex Fastnet Race in 2015). This will be her first battle against in particular the first new generation IMOCA, Charal, launched last year and skippered by Jérémie Beyou and Christopher Pratt. Jérémie Beyou: “Depending on conditions, the course may favour boats with daggerboards, but I’m really up for the fight with Christopher, with our goal being to give it our all throughout the race.”

Among the foilers from previous generations, we will see Louis Burton’s Bureau Vallée 2 (ex-Banque Populaire winner of the Vendée Globe), the German Boris Herrmann’s Malizia (ex-Edmond de Rothschild), the Italian Giancarlo Pedote’s Prysmian Group (ex-St Michel Virbac) with the Figaro racer Antony Marchand aboard. British sailor, Samantha Davies is also competing on her Initiatives-Cœur with Paul Meilhat, winner of the 2018 Route du Rhum and Rolex Fastnet Race title-holder. Vincent Riou’s former PRB will be back racing, this time in the hands of Kevin Escoffier: “This Fastnet will be my first race in the colours of PRB and I can hardly wait. My goal is to continue to learn, but we are all keen competitors and I have seen the boat’s potential, so we would like to make it to the podium in this first race.”

For the new solo Atlantic record-holder, Alan Roura, who will be taking Sébastien Audigane aboard La Fabrique (ex-MACSF): “Conditions look like they will be fairly light, which is not ideal for us… But we need to qualify for the Transat Jacques Vabre, as that will mean we can feel more relaxed for the rest of our preparation.”

Finally, Fabrice Amedeo will be taking Eric Peron aboard Newrest - Art et Fenêtre (ex-No Way Back): “The IMOCA fleet will be well represented, and this will allow us to see how we measure up against our rivals. It looks like being a hard fought race with boats bunched up close to each other.” Aboard La Mie Câline - Artipôle (ex-Kilcullen Voyager), Arnaud Boissières will be accompanied by Japanese sailor, Hiroshi Kitada. As for Yannick Bestaven, he will be sailing double-handed with Roland Jourdain on the foiler Maître CoQ.

The fastest of the IMOCAs with straight daggerboards will probably be Banque Populaire X (Paul Meilhat’s former SMA) skippered by the young French sailor, Clarisse Crémer, who is starting out in IMOCA racing with Armel Le Cléac’h at her side. They will be facing a lot of IMOCAs from the 2008 Vendée Globe generation, including Groupe Sétin (Jean-Pierre Dick’s former Paprec-Virbac) skippered by Manuel Cousin, who will be with Gildas Morvan, Miranda Merron and Halvard Mabire’s Campagne de France (Dominique Wavre’s former Temenos), which was relaunched last week in her new colours. Aboard Time for Oceans (ex-Hugo Boss from 2007), Stéphane Le Diraison has chosen François Guiffant, who will also be alongside him in the Transat Jacques Vabre: “The fact that I will be spending time at sea with Stéphane will allow me to plan for future changes aboard the boat, as we look ahead to the 2020 Vendée Globe.” On Groupe Apicil (Eric Bellion’s ex-CommeUnSeulHomme), we will see the winner of the last Solitaire du Figaro, Yohann Richomme alongside the skipper Damien Seguin: “We now have a boat that should perform much better than in the Route du Rhum, as she is lighter and fitted with angled daggerboards.”

For the skipper from Saint-Malo, Maxime Sorel sailing double-handed with Guillaume Le Brec, it is time to step up to race mode aboard V and B - Mayenne (Kito de Pavant’s ex Groupe Bel): “The Rolex Fastnet Race is a highly technical, long sprint, which should enable us to settle in together and face a line-up with some very strong competitors. You can rely on us to give it our all out on the water.” We should add that the Belgian skipper, Denis Van Weynbergh is also taking part with Vendée-based Lionel Regnier on EyeSea (Nandor Fa’s ex-Spirit Of Hungary).

The 20 IMOCAs setting sail in the 2019 Rolex Fastnet Race