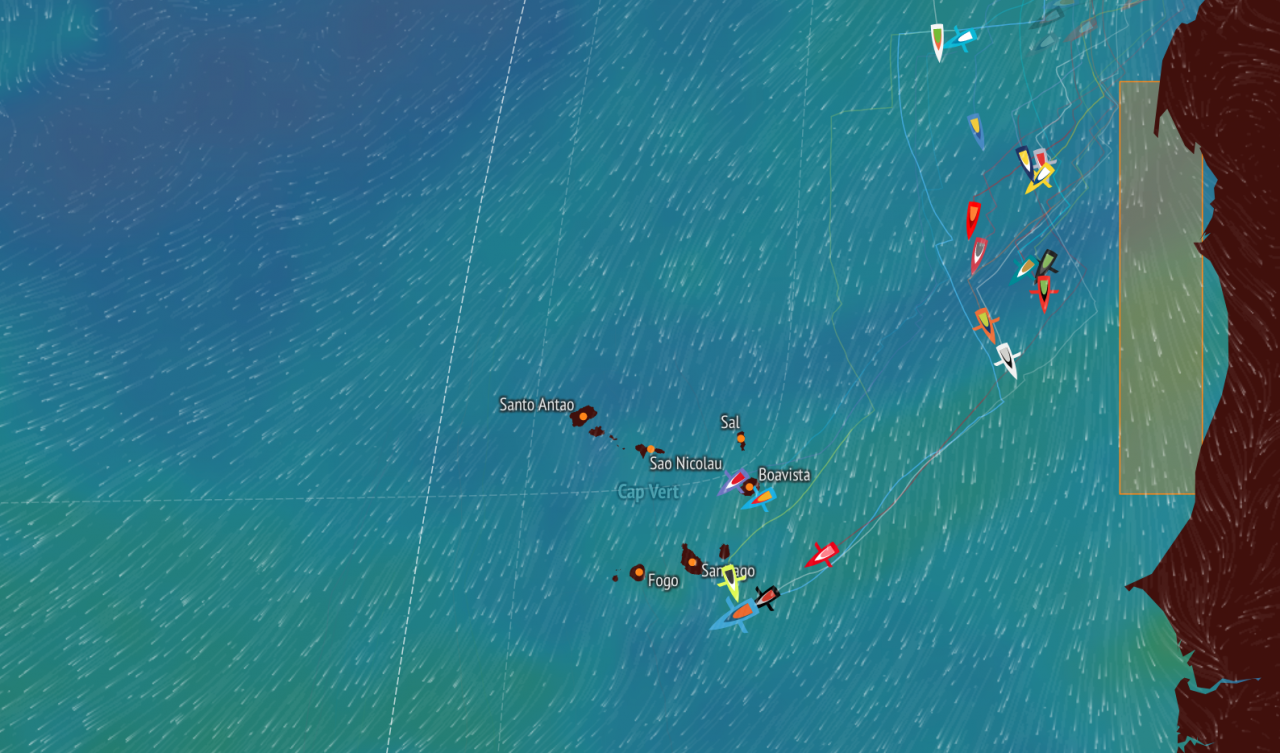 After nine days in the 15th edition of the Transat Jacques Vabre, the leading boats in the IMOCA Class are heading west under the Cape Verde Islands with a now-familiar round-the-cans feel to this transatlantic marathon.

The leaders are Thomas Ruyant and Morgan Lagravière on LinkedOut who have been battling with Charlie Dalin and Paul Meilhat on APIVIA and Jérémie Beyou and Christopher Pratt on Charal at the head of the fleet.

With just over 3,300 nautical miles to sail to the finish at Fort de France on Martinique, Ruyant and Lagravière have a 24-mile advantage over Apivia in second place and with Charal two miles further back in third position.

There is then close to a 60-mile gap to Initiatives-Coeur in fourth with 11th Hour Racing Team-Mālama and ARKEA PAPREC less than four miles apart in fifth and sixth positions respectively. The backmarker in the 20-strong fleet, EBAC (Antoine Cornic and Jean-Charles Luro), is about 760 miles north of LinkedOut.

The leading crews are sailing downwind in light conditions under sunny skies but with a far from straightforward meteorological picture to contend with. Having stayed a long way to the east down the Mauritanian and Senegalese coasts, to benefit from the best wind conditions, they now have to get west as they line up for their Doldrums crossing.

But the infamous Pot au Noir is looking threatening as it expands and contracts to the south of them, with the possibility that the fleet could compress in the next few days, allowing the boats further back, led by Prysmian Group (Giancarlo Pedote and Martin Le Pape) – 273 miles behind the leader – to catch up.

Ahead of them, Lagravière on LinkedOut says this Transat Jacques Vabre feels more like a huge inshore grand-prix than a trans-ocean marathon. “It is more like a Solitaire du Figaro than a transatlantic race in that we have a close battle with APIVIA and Charal which is particularly intense,” he reported.

“We have been racing almost in sight for a few days. This generates intensity both in the way we sail the boat and in the way we refine our strategy…it also has an impact on the rhythm on board because the level of play is much higher. We give it our all at every moment.”

Enright says their duel with Sébastien Simon and Yann Elies on ARKEA PAPREC has been a lot of fun. “Yeah, yeah, those guys,”he said in a satellite call from on board, “we’ve seen a lot of them over the last three or four days and every time we go back (near them), there is some good VHF banter…it’s been push-pull between us.”

This race has given Enright and Bidégorry the chance to put the brand new Malama through her paces. The American co-skipper says they have managed to cope with various things breaking or not working, but the boat is now stable and working well, while its co-skippers learn speed lessons all the time.

“We really went into the race with no expectations and had a good exit from the Channel and Ushant,”said Enright. “We are still learning the boat, sail handling, ergonomics, all that kind of stuff – kind of learning it on the fly. With the performance stuff, we’re just scratching the surface, so every new condition is a new time to experiment really for us more than anything else.”

Back on LinkedOut, which is proving a potent and competitive package despite having smaller foils than Apivia, Lagravière summed up the weather position as “not conventional,”as the Doldrums looms and then the trip down to the turning mark at Fernando de Noronha. “It’s not easy and that’s been the case since the start,”he said. “We often have good surprises, often a little more wind than on the files. We manage to get the most out of the boat, so it’s nice. It’s the same for everyone and the random element remains controllable.”

The Réunion-born sailor was not giving anything away when it comes to the Doldrums and the place they plan to cross it. “The approach is different from other years,”he summarised. “We will really know the situation once we have crossed it. These are things that evolve until the last minute.”

On Enright’s mind is what happened in the last Transat Jacques Vabre in 2019 when Beyou and Pratt on Charal went into the Doldrums with a big lead and then stopped, allowing the chasers to sail around them. “We saw Charal go in with a 200-mile lead and park-up and it became pretty clear to everyone else – don’t go there! – anywhere but there!”he said, laughing.

On Initiatives-Coeur, meanwhile, Britain’s Sam Davies and Frenchman Nico Lunven continue to impress in their older red and white IMOCA. They have been contending not just with the race, but a clothing problem, as Davies revealed in her latest message from on board. It turns out that Lunven forgot to pack any T-shirts for the Tropics.

“Sam? he says,”reported Davies, “I forgot my T-shirt. For once I think, I took enough T-shirts and I proposed a solution: I will share my T-Shirts. Nico is going to wear size 10 women’s clothes (or 12 if he’s lucky) for the next eleven days. And he’s going to do the laundry.”