Vendée-Arctique-Les Sables d’Olonne: all to play for! 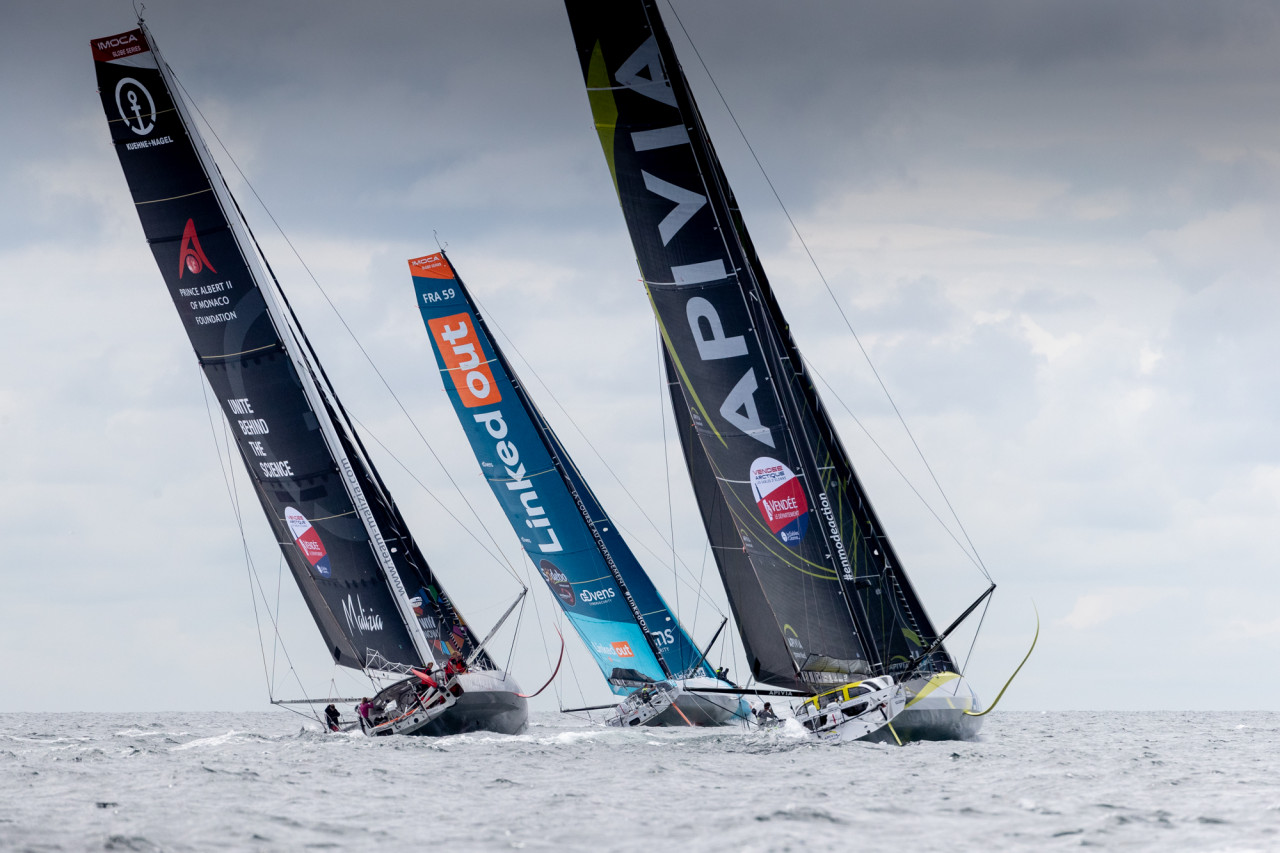 Designed for those sailors rekindling their ties with competition and life offshore, or qualifying for… and possibly winning the Vendée Globe, there is a great deal at stake for the sailors setting sail on the Vendée-Arctique-Les Sables d’Olonne on 4 July at 15:30hrs local time.

This first edition of this race, which has been organised as a replacement for the New York-Vendée-Les Sables d’Olonne originally due to set off on 16 June, is a key stage for the skippers preparing for the solo round the world race, which will set sail on 8 November. This demanding and attractive sprint up to Iceland and down to the Azores is also a source of great inspiration in what is a very special context. In fact, the race is one of the first sports events to take up again after the lockdown and everyone has had to adapt accordingly.

Indeed, the health crisis and the two-month lockdown have seriously disrupted the schedule for sports teams everywhere and it’s the first performance to host 21 boats and skippers in race configuration since this episode, as Jérémie Beyou (Charal) explains: “We have had to  be able to work differently to satisfy our sporting objectives, which remain identical despite the much tighter timeframe. Everything is on a very tight schedule from the end of the Transat Jacques Vabre in late 2019 to the start of the Vendée Globe in late 2020 and it’s been necessary to rework the whole schedule. Mentally, you prepare yourself within a very precise timeframe and calling all that into question once everything’s been planned out so meticulously is not easy.”

Urgency comes in various forms. There is an urgent need to put the sailors to the test as they have to learn how to deal with increasingly powerful, quick and violent machines, get their bodies used to the sea again and rediscover the reflex actions of the solo sailor thanks to these ten to twelve consecutive days at sea. For Clarisse Crémer (Banque Populaire X), an enthusiastic rookie from the Class IMOCA, this is a big step. “The Vendée-Arctique-Les Sables d’Olonne will be my first singlehanded race in IMOCA, which is no mean feat! Even though I’m keen to go fast and sail a fine trajectory, I’m essentially going to focus on my boat and myself. I will endeavour to get off to a good start all alone, to manage my boat well and properly think through my manoeuvres and strategy. This race is a major objective for me as someone who was not predestined to integrate such a fine team and inevitably I feel a sense of apprehension about it. Completing the race, honouring my team and proving myself as a sailor are some solid objectives in themselves.”

Having had to call a temporary halt on their development plan, the design offices and the technical teams are counting on this race to trial their boats, step things up a gear or work on performance. In the ARKEA PAPREC team, one of the challenges is to test the new pair of foils which have just been installed. “As I’ve only received the foils shortly before the start, I haven’t set myself any goals with regards to results,” explains event local Sébastien Simon. “Above all, I need to understand how my boat handles with these new foils. I feel a little apprehensive about my participation in this event as it’s not an insignificant challenge. These foils are seven metres: they provide a lot of power.” This power is something that a skipper has to learn to control and it’s something you have to get your body used to. The skipper of MACSF, one of four women in the line-up, Isabelle Joschke, is adopting a careful approach to the event: “I must admit that it’s not always enjoyable sailing a foiler. My training back in February gave me a chance to learn what I’ll be facing this winter. It’s fun when the boat goes fast but the moment there are heavy seas, it’s very unpleasant. When you are on the boat, you have to hang on tight everywhere as it can be dangerous.” The objective in this race: “I want to know how far I can push the boat, whilst ensuring she has enough energy to last another week, then another and then another as the round the world race will be very long.”

The Vendée-Arctique-Les Sables d’Olonne is the last opportunity to satisfy the conditions required to qualify for the Vendée Globe in race format. Five of the seven skippers who still have to fulfil the competitive prerequisites will be at the start in Les Sables d’Olonne on 4 July. For Sébastien Simon, supported by a new boat, the constraints weighing on his shoulders can be summed up by a 2,000-mile passage. For Isabelle Joschke (MACSF), Clément Giraud (Vers un monde sans SIDA), Japanese skipper Kojiro Shiraishi (DMG Mori Global One) and Armel Tripon (L’Occitane en Provence), it’s all about making the finish line. In fact, the latter sailor from Nantes is currently facing an additional challenge as his IMOCA hit a UFO, an unidentified floating object, whilst out sailing last weekend. The damage (a hole in the bow and a damaged rudder) is serious and his team now face an express repair if the skipper is to be able to make the start of this crucial race.

Pedal to the metal

17 of the 21 solo sailors will be free of any obligations to qualify, meaning they can put pedal to the metal on their IMOCAs. Perched on the latest generation monohulls, Jérémie Beyou (Charal), Charlie Dalin (Apivia) and Thomas Ruyant (LindkedOut) rank among the natural race favourites. “There is a start line and a finish line so inevitably that gets you a bit riled” jokes Jérémie Beyou. “To pull a solid result out of the bag would be a good thing because it would reward the efforts of everyone involved. We’re looking to find out how we fare in relation to the others and if our choices were the right ones. If need be, we also have a little book where we’ve already noted the modifications to be made to the boat over the course of the summer.” Winner of the Transat Jacques Vabre 2019 in Apivia’s first official race, with Yann Eliès, Charlie Dalin explains his trajectory: “The Vendée-Arctique-Les Sables d'Olonne will be an intermediate test stage, a kind of mock exam prior to the Vendée Globe. Above all, it will be a chance for me to get back to the competition, which is something I miss! I’m really keep to rediscover the special taste of an on-the-water clash!”

The race favourites on paper, these three men certainly won’t have a clear road to glory. Indeed, it is a dense line-up and even the boats from the previous generation have made some impressive progress in terms of performance. Jérémie Beyou: “There are no small teams any more: there have been some fine developments in terms of engineering and architecture. Even the boats launched later than Charal have developed some intelligent elements. We’ve been known to say that the standard is increasing each time. In this instance, it’s blatantly obvious. The new boats go fast and the slightly older boats have made real progress. It’s hard to predict who will come out on top.”

Finally, there will be the meteorological impact to manage too of course. Clarisse Crémer: “I hope that the weather conditions will be good so we don’t damage the boats too much, but I also need to experience some slightly ‘hairy’ weather as well…” Equally, though the cold might well prompt Sébastien Simon to consider installing heating aboard with a view to the Vendée Globe, he believes that the 3,566-mile triangular course between Les Sables d’Olonne, Iceland and the Azores will doubtless force the sailors to sail differently: “Contrary to what the Vendée Globe offers, here we won’t be able to escape the weather phenomena.”

*Note that the skippers will leave their port of registry on 3 July, one day before the race start having been subjected to a serological test. They will remain at sea until the start on 4 July at 15:30 hours.

Benjamin DUTREUX skipper on board the IMOCA Water Family, will not be on the starting line of the Vendée-Arctique Les Sables d'Olonne race for budgetary reasons. The skipper based in Les Sables d'Olonne will nevertheless remain focused on the Vendée Globe, which he is already qualified for and he continues his search for sponsors.