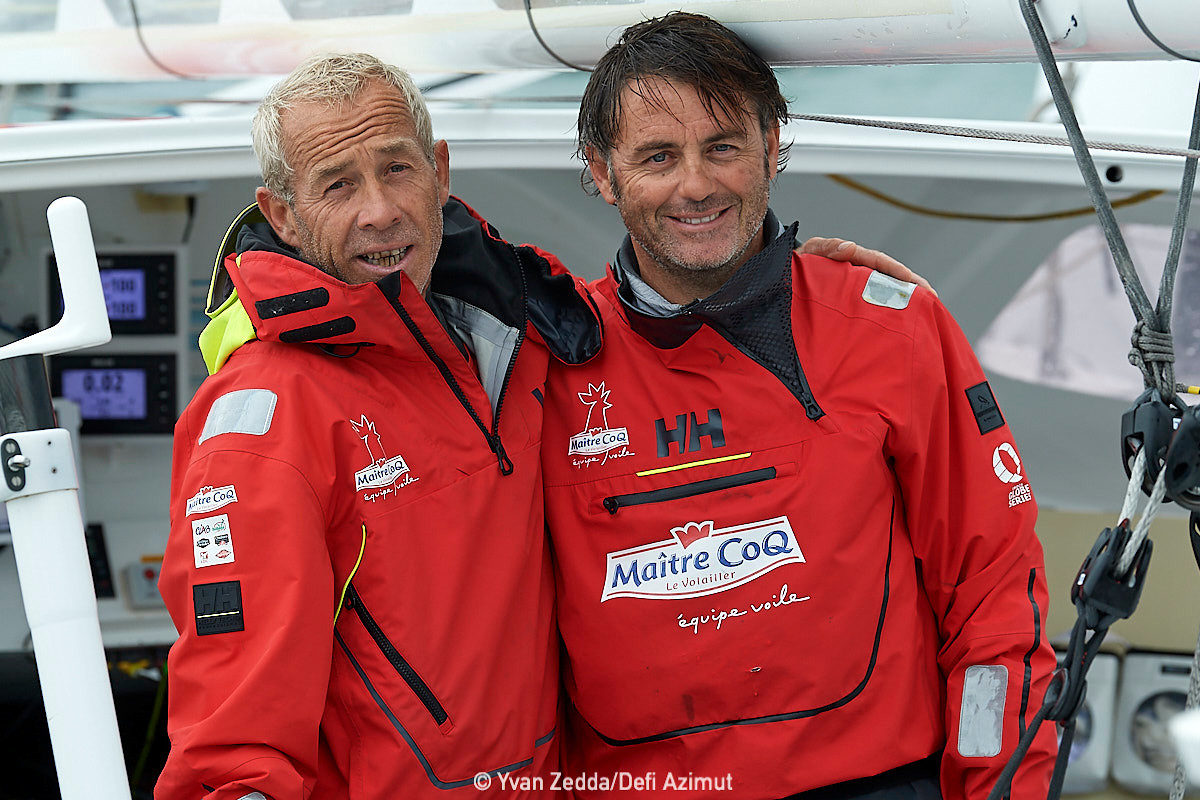 Between now and the start of the Transat Jacques Vabre, the IMOCA class has decided to share with you some portraits of the duos getting together for the first time for the double-handed transatlantic race. Today, we take a look at the pairing of Yannick Bestaven with Roland Jourdain (Maître CoQ), who look like outsiders, but who could nevertheless make it into the top five or higher.

“Ever so natural… the obvious choice… a simple decision”. Those were among the words used by Yannick Bestaven and Roland Jourdain, when asked to talk about how they got together and how they work as a pair.

Right at the start of the year, Yannick Bestaven acquired Maître CoQ (ex Safran) from Roland Jourdain’s company, Kaïros. “Roland and his team handed me the boat with the full instruction manual. On top of that, they came on board to allow me to get to grips with her during some training sessions in Cascais (Portugal) in February and March. I took advantage of a fast track learning programme and saved myself a lot of time,” Yannick explained. When the moment came to choose his co-skipper for the season and in particular for the Transat Jacques Vabre, the sailor from La Rochelle “quite naturally thought of Roland Jourdain. An obvious choice. I just looked him in the eyes, and I don’t even remember whether I needed to ask him or not!” added Yannick. “I didn’t think about it for more than two seconds. It all made sense. I love this boat and I know her well and I really like Yannick. It was so easy to get excited,” declared Roland.

Yannick Bestaven and Roland Jourdain appreciate each other as sailors, but also as individuals, which is one of the strengths of this pairing. “Bilou is an excellent sailor, but also a very generous guy. It’s great to be able to share his professional experience and friendship out on the water and on dry land. He is always so upbeat, even after all he has been through. He’s a bit like a kid. That’s nice to see. He enjoys getting soaked when the waves break over the deck, which suits me fine,” smiled Yannick. Roland Jourdain shares this same enthusiasm. “Aboard the boat, everything comes naturally and is easy. We get on well together and Yannick is a very friendly person. I have a similar personality and like others who share that trait. Another thing we have in common is that we are both businessmen. He looks after Watt and Sea and I have Kaïros. We both have a very open outlook.”

While Roland Jourdain started out with the role of passing on his experience to Yannick Bestaven, the two sailors find themselves today on the same footing. Yannick has got used to the boat and knows her well, but the learning process was beneficial in the other direction too. “Now, we just want to share our experiences, talk things over and combine our knowledge. That lies at the heart of succeeding as a double-handed crew,” stressed Yannick, who has always found talent to accompany him during his attempts at the Transat Jacques Vabre (having sailed with Eric Drouglazet, Aurélien Ducroz, Pierre Brasseur and Kito de Pavant).

“If we get on the podium, the caipirinha will taste even better!”

When asked about their sporting goals, Yannick (twice winner of the event in Class40) and Roland (winner in the IMOCA category in 2001) once again are in total agreement: getting into the top five looks like a reasonable and achievable goal, even if the competition is strong. “But if we get on the podium, the caipirinha will taste even better,” said Roland Jourdain. “We are aware that we don’t have quite the same power in certain points of sail as some of the other IMOCAs with their huge albatross foils. If the weather works out well with the sails opened out from the start, it is going to be hard for us. What we need is a real Transat Jacques Vabre, which is really complicated and takes us back to the roots, and then we can hope for a great result. Yannick has the bit between his teeth and I love it when the boat is speeding along. So we’ll do our very best, while enjoying ourselves.”

To Finish First - Episode 1: No Quit

To Finish First lifts the lid on life at Alex Thomson Racing, one of the world's most formidable sailing teams. Episode 1: No Quit offers fans a rare insight into the unpredictable and, at times, brutal world of single-h…