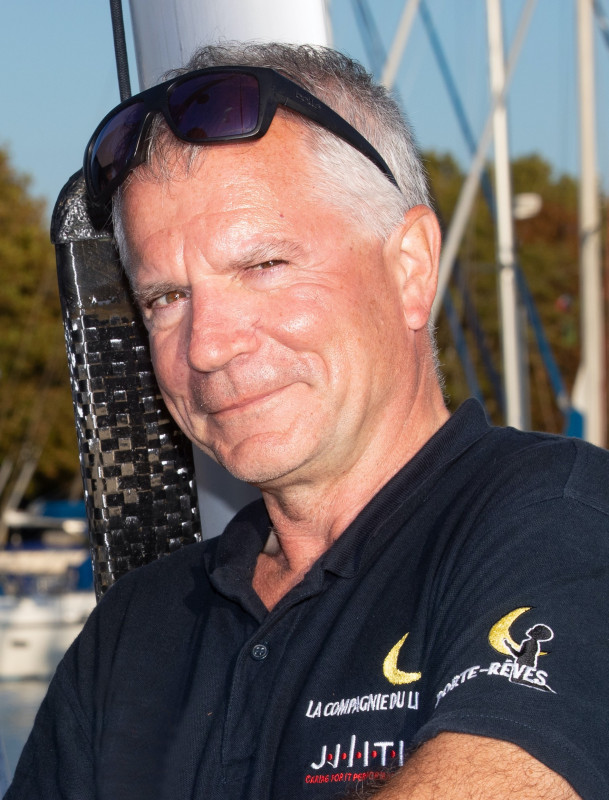 Erik is a native of Arcachon but spent his school holidays in Saint-Pierre-Quiberon where, having taken Optimist lessons, he got into windsurfing as soon as it hit French shores, followed by a sports dinghy and a coastal cruiser. Following his studies in engineering, he hit the competition circuit once again on a sports dinghy with his mate Marc (Pacome) Jouany with a 470 background.

Consequently, Erik spent some 15 years 505 racing before rubbing shoulders with those he would cheer on at the start of their transatlantic races. In this way, Marc Thiercelin was the patron of his Figaro 2 in 2005 and Sam Davies was patron of his Class40 and then his Multi 50, with which he participated in all the major offshore races from the Route du Rhum to the Transat Jacques Vabre, to the Quebec Saint Malo, the Solidaire du Chocolat and The Transat.

Constantly pushing the envelope, he bought Louis Burton’s Bureau Vallée in 2017 and finished 10thin the Route du Rhum 2018 in his first IMOCA experience. He’s currently preparing for the Vendée Globe 2020 by planning to participate in three more transatlantic races between now and then. His project continues to be coloured by the amateur and adventurous spirit which has guided his racing for nearly 15 years and he commits a large element of it to the fight to combat HIV/AIDS.

The patron of his IMOCA "vers un monde sans sida" (towards a world without AIDS) is Françoise Barré Sinoussi, who received the Nobel Prize for Medicine for discovering the virus responsible for AIDS. In addition to his talent as a sailor, which enables him to perform well against the offshore racing professionals, Erik shares his emotions through his logbooks published daily during races.

The sailboat with the red ribbon

"My project aims to show its public audience the inner workings of its major offshore racing adventure, from the delights to the misfortunes, as well as sharing the values of solidarity, diversity and technological progress for everyone’s benefit. The freedom that I’m searching for is expressed through the opportunity I’ve been given and that I’m taking, to get off the beaten track, to be able to express myself by taking risks I understand and accept, in the knowledge that I’ll be able to benefit from both kindness and solidarity should an incident occur. For the wonderful partners, who have made it possible for this project to go all the way, who I will embark on this journey with me and who will share this experience, it is about participating in the most remarkable adventure ever offered to us: three months alone around the world on the oceans; oceans which, like us, can witness climate change in action. It will also be about the experience of living altogether in a space coloured by freedom, where the boundaries are done away with, where the rights are the same for each and every person and where projects can only exist and be accomplished in their entirety with everyone’s solidarity."