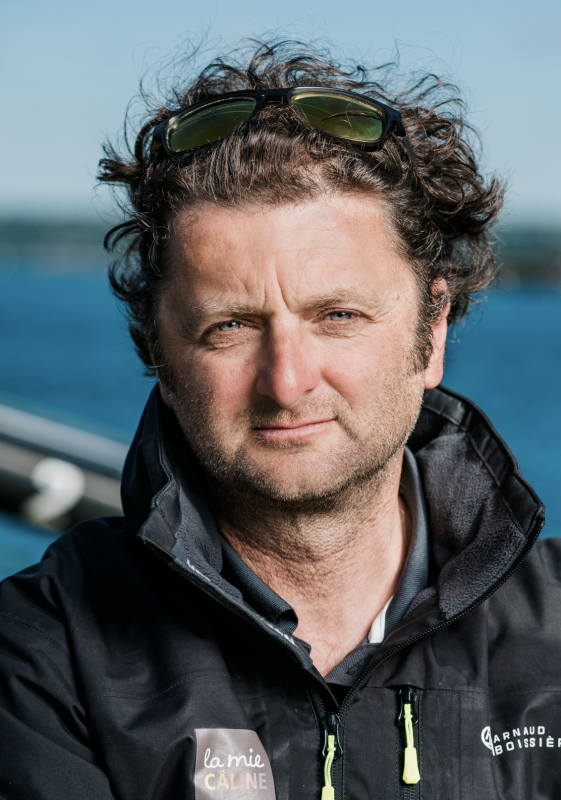 Yachtsmen always wish they were sailing offshore yet not a day goes by without them talking about the waters on which they had their first sailing experiences. For Arnaud Boissières, these waters are in Arcachon and its well-known bay. He is funny, nice and open which, along with his availability, is appealing and comes as a reminder that you can be a very serious skipper without taking yourself too seriously. The yachtsman, who is seen as an ideal buddy, was immediately welcome in the offshore racing world and nicknamed “Cali”, half-tenderly and half-amusedly.

But there is a lot more to Boissières than all that as he is also a stubborn and ambitious yachtsman. He learnt offshore sailing from some of the best skippers such as Yves Parlier or Catherine Chabaud who trusted him their own boats. He naturally likes to go for things and will never give up. After dismasting in the 1999 Mini Transat, he not only managed to save his boat after a stop in France but he also finished the race. Cali sailed with champions like Olivier de Kersauson in his round-the-world record attempt before making a name for himself in solo races.

In 2008, at the age of 36, he participated in his first Vendée Globe and finish seventh. Even though sailing specialists all agreed on how great his human qualities were, very few expected such a performance from a man who was virtually but soon became one of the favourites of the public, who appreciates his good humor and his availaibility. With a circumnavigation, six transatlantic races and thousands of nautical miles of training, Boissières has become one of the most experienced skippers in the world.

In 2012, Arnaud finished 8th in the Vendée Globe. And he repeats the experience on the following editions, in 2016 and then in 2020, where he finished 10th and 15th respectively.

At the end of 2021, he will take over the helm of the former Initiatives-Coeur, a 2010 VPLP-Verdier design equipped with new foils, and will take part in all the IMOCA GLOBE SERIES races in order to prepare for his fifth solo round-the-world race.

The wind came into Martinique late into the morning, welcoming Arnaud and Rodolphe into the port. The Transat was both a new experience for Rodolphe as it was for Arnaud: their relationship grew over the course of the ra…

Arnaud Boissières : "You have to keep hard at it and give it your all"

“I’m tired, because there were five of us battling it out for a while. That’s what’s nice. You sail around the world but in a race, it’s very intense. You have to keep hard at it and give it your all. That’s what I was l…