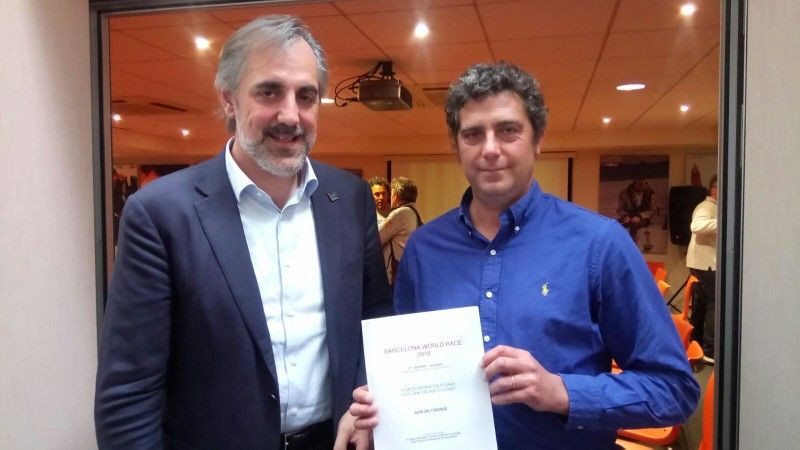 The Barcelona Foundation for Ocean Sailing (FNOB) published the Notice of Race of the Barcelona World Race 2018- 2019 at the IMOCA General Assembly, held in Paris on April 26th, after agreeing with the IMOCA class the new race format.

The Barcelona Foundation for Ocean Sailing (FNOB) published the Notice of Race of the Barcelona World Race 2018- 2019 at the IMOCA General Assembly, held in Paris on April 26th, after agreeing with the IMOCA class the new race format.

The Notice of Race of the Barcelona World Race 2018-2019, which will start on January 12th, 2019, was published by Xosé-Carlos Fernandez, FNOB CEO and member of the General Assembly and Board of Directors of the IMOCA Class. The FNOB technical team has worked with the IMOCA class and the Vendée Globe organization for the last six months to agree on the new Barcelona World Race format. The objective of this collaboration work between the organizers is to achieve better coordination between the Barcelona World Race and the Vendée Globe, as well as to gather the suggestions of the IMOCA class team regarding the perfect format for the Spanish race.

The FNOB has wanted to meet the market demands, that is, the potential participating teams, in order to get greater participation and reach new sponsorship territories. The Notice has been received positively and, in the coming days, FNOB CEO plans to carry out interviews with those teams that have already expressed their interest.

Among the new rules, the fourth edition of the Barcelona World Race will have two parts: Barcelona-Sydney-Barcelona and the sum of times for both legs will establish the final ranking. The Australian city will be a mandatory stopover, where teams will be able to carry out technical repairs and replace the co-skipper if desired.

(Subject to amendments on behalf of the RFEV)

About The Barcelona Foundation for Ocean Sailing (FNOB)

The Barcelona Foundation for Ocean Sailing is a public institution formed in 2005 with four strategic objectives in mind: Sports, Education, Science and Industry. It is devised to undertake a series of projects geared towards promoting and boosting activities related to top-level ocean sailing. The FNOB is currently working on its four key strategic areas with the support and contribution of universities, institutions and companies in Barcelona.

The platform -formed by the Barcelona City Council, Fira de Barcelona (Barcelona Trade Fair), Barcelona Port Authority and Barcelona Chamber of Commerce- has already organized three editions of the Barcelona World Race, the round the world, two-crew sailboat race which has become one of the pillars, together with the Vendée Globe, of the IMOCA OCEAN MASTERS World Championship. The FNOB has also organized The New York -Barcelona Transoceanic Sailing Record, the Sailing Tour of Spain and The Europa Tour- Imoca Warm Up.